Why Ukraine Wouldn’t Be a Cakewalk For Russia 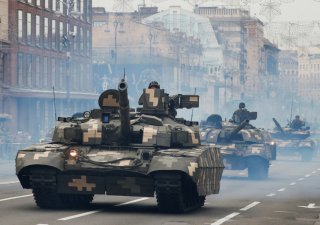 When will Russian president Vladimir Putin strike Ukraine again? It may be sooner than you think. President Joe Biden stated in his recent press conference that he’s convinced that Russian troops will attack, and Washington’s national security establishment is on edge.

Right now, more than 100,000 Russian troops plus an array of tanks and weapons surround Ukraine from three sides. Last week, a cyberattack hit a number of Ukrainian government websites to test their vulnerabilities and weaknesses. Russia also sent soldiers into Belarus (no one knows exactly how many) and six Russian ships are on the move to the Black Sea where they could be deployed as part of an amphibious attack on Ukraine from the south. Meanwhile, the troop numbers keep climbing.

Diplomacy has been inconclusive. This past week it tamped down Moscow’s bellicose rhetoric for all of three minutes and generated more talks. Moscow appears to be looking for a summit meeting between Putin and Joe Biden.

But the United States and Russia are at an impasse, and it’s hard to see how it could be surmounted. Moscow is issuing sweeping demands that the West provide a written guarantee of no further NATO expansion and even demanding a military retreat from Bulgaria and Romania—demands that the West has no intention of satisfying. No diplomatic formulas can efface this fundamental difference. Put bluntly, no American president would ever agree to what would amount to a Russian veto over NATO membership, let alone American foreign policy.

Yet despite the flurry of threats and diplomatic parleys, Ukrainians themselves remain phlegmatic. Vladislav Davidzon, my Atlantic Council colleague who is currently visiting Odesa, reports that no one wants to talk about an impending war. “The attitude is that we’ve been at war with Russia for eight years. What’s new?” Davidzon said.

He’s not alone in his gelid assessment. “It’s not happening yet,” Andriy Zagorodnyuk, a former defense minister of Ukraine and chairman of the Center for Defense Strategies in Kyiv, Ukraine, told me. The “it” is a full-scale Russian invasion of Ukraine.

Zagorodnyuk says that the number of Russian soldiers surrounding Ukraine stands at 120,000-140,000 and that Moscow would need a minimum of 200,000 for a full-scale invasion. 300,000 would be preferable. He rates it unlikely. According to Zagorodnyuk, Russia is not yet prosecuting the logistical activities that would need to precede an actual war. Zagorodnyuk says to watch the movement of Russian soldiers and fuel, and the installation of mobile hospitals.

Meanwhile, in Kyiv, some locals are preparing to evacuate their families and dogs to central and western Ukraine as early as next week, and the main highway that runs between Kyiv and Lviv in western Ukraine remains unclogged at this point. But don’t expect Ukrainians to flee en masse. The conviction that Ukrainians will cave if Putin goes in again with tanks and planes could not be more mistaken. Recent polling indicates that Ukrainians will resist. The likelihood is that more than 50 percent of Ukrainians will fight or participate in civil resistance if Russia invades again. Only 9 percent plan to go abroad.

For all the assessments of Putin as a geopolitical mastermind, he could be in over his head when it comes to Ukraine. In my view, Ukrainians will resist any incursion, minor or major, fiercely, and Moscow may be miscalculating if it thinks an invasion would be a cakewalk. British secret services recently suggested that Moscow hopes to depose the current government in Kyiv and replace it with a pro-Russian hack. If so, it’s miscalculating. Such a move would only reveal that Moscow thinks it understands Ukraine far better than it actually does. Ukraine has undergone enormous change since 2014 and any attempt to install a puppet regime would boomerang upon the Kremlin.

The most probable scenario is this: Russia bludgeons Ukraine with a massive cyberattack while cutting power and heat. Then it knocks out the Ukrainian air force and its miniscule navy and destroys any major weapons stashes and its supplies of drones. The goal is simple—force the Ukrainian government to the negotiating table on its knees. But Ukrainians will resist, and that stout resistance could ensure that Moscow becomes enmeshed in a conflict that turns into a quagmire for it. Putin would do well to ponder the possible consequences of a gamble gone awry that could threaten his legacy.