Why U.S. Sanctions on Russia’s Automotive Industry Might Not Work 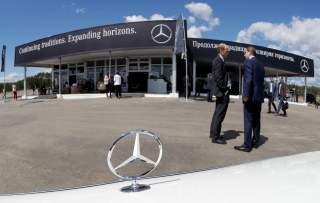 The United States should have put into effect sanctions against Russia’s second biggest car manufacturer, Gorkovsky Avtomobilny Zavod, also known as GAZ Group, on July 4. The Office of Foreign Assets Control (OFAC) put the company, which is owned by Russian oligarch Oleg Deripaska, on its sanctions list back in April 2018. That list also includes Deripaska’s many other companies. This is the sixth time this year that sanctions against the automotive manufacturer have been postponed. Given that GAZ Group is one of the two biggest car manufacturers in Russia, and important to the Russian economy and social stability, it is crucial to understand the possible impact of these sanctions.

In order to remove GAZ Group from the sanctions list, Deripaska must give up control of the company. Currently, his company Russkie Mashiny controls 65.5 percent of GAZ, which makes Deripaska the ultimate beneficiary. Thus, in order to protect GAZ Group, Deripaska should decrease its share to under 50 percent and follow the example set by Rusal and EN+ Group, which have been removed from OFAC’s sanctions list. In fact, if the Russian billionaire agrees to take GAZ Group down the same path, then he has to face certain facts.

Why Does GAZ Matter?

The president of GAZ Group has reported that the company will have to decrease its production by 40 percent if it doesn’t get state support worth $500 million. The main issue is that if the sanctions come into effect, then the company won’t be able to buy spare parts and production components. GAZ is dependent on imported accessories. It can only locally produce 50–70 percent of all necessary components, the rest of those components must be imported. That means if the sanctions go into effect, then the company won’t be able to work with its foreign partners, which would halt the assembly line. Additionally, GAZ Group employs about 40,000 people, and there another 360,000 workers at supply chain companies who could lose their jobs if the company goes bankrupt. As a result, the sanctions put at risk 400,000 workers across the country.

This major car company is a part of one of Russia’s crucially important industries—one that it cannot afford to “sink.” That means the Russian government will bail out the company no matter what. Last year the Russian state allocated financial support worth $130 million to GAZ Group. It did the same for AvtoVaz, the biggest Russian car manufacturer, at the time of the global economic crisis back in 2009. The company avoided declaring bankruptcy by accepting a $600 million bailout from the Russian government which saved the company.

According to Deripaska, if U.S. sanctions come into effect, then GAZ Group might have to declare bankruptcy and nationalization given that the Russian government can’t allow such company to die. Because if GAZ Group goes under, then tens of thousands—or possibly hundreds of thousands of workers—might lose their jobs. The Kremlin doesn’t want additional social pressure and discontent while it is already struggling with domestic economic problems. Although Minister of Industry and Trade Denis Manturov claims that scenario of nationalization of GAZ Group hasn’t been discussed in the government, the possibility of such a scenario still exists.

Back in 2018 Russia’s vice prime-minister in charge of the automobile industry, Dmitry Kozak, stated that the government was considering different ways to remove GAZ from the sanctions list. He said that German Volkswagen Group was potentiailly interested in acquiring a share in GAZ. However, the head of Volkswagen Group Rus, Marcus Ozegovich, said that currently the company cannot buy a share in GAZ because of the U.S. sanctions. It doesn’t want to be involved in the messy affair and will be awaiting the political solution between the parties.

Deripaska said that foreign partners of GAZ are already ceasing their contacts with the Russian company. According to Deripaska, many suppliers and partners have already stopped working with the company because they want to avoid negative impact from the sanctions. In December 2018 GAZ factory stopped assembling Daimler’s Mercedes-Benz Sprinter over sanctions fears.

Deripaska believes that the Kremlin only benefits from the planned U.S. sanctions against GAZ Group. “It is another big opportunity for state bureaucrats to get more tools to play with in a situation where 70 percent of the Russian economy is in the state hands,” the billionaire has argued. Therefore, the sanctions are counterproductive and won’t change the Kremlin’s behavior. Instead, they will leave less room for foreign business in Russia. But that said, they won’t necessarily hurt GAZ Group. For example, state-run agency Rostec increased its control over the car-producing companies like Kamaz and AvtoVaz during times of struggle, and that venture proved to be quite successful.

Also, in June 2019 workers of GAZ Group held a demonstration in front of the U.S. embassy in Moscow for the first time. They collectively asked Washington not to sanction their employer. They repeated their demonstration on July 4 in front of Spaso House—the residency of the U.S. ambassador to Russia.

Also, the mere fact that the United States keeps extending the deadline for implementing the sanctions indicates that Washington might not be sure how to deal with GAZ Group if it is acquired by the state. After all, pushing a Russian private business out of its cooperative relationship with European and U.S. partners will only further benefit the Kremlin. Deripaska now has another four months to settle this issue with OFAC. During that same timeframe, GAZ Group’s European partners will most likely continue to cut ties with the company.

Alexey Khlebnikov is a MENA expert in the Russian International Affairs Council. He is also an independent consultant on the MENA region and Russian policy and strategy with private clients and NGOs.