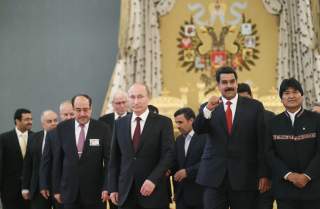 As Venezuela descends deeper into crisis and America and European Union continue to condemn the dictatorship, Russia remains firmly in the pro-Nicolás Maduro camp. With inflation at over 300,000 percent and domestic instability at its breaking point, Venezuela is not a likely bet for international investors. Despite grim prospects, the Russo-Venezuelan partnership is, for some reason, enduring. This is because, for Russia, Venezuela is not a risky investment but a strategic ongoing deal with the promise of long-term gains.

Like any negotiation, the Russo-Venezuelan deal can be characterized by both the countries’ positions (what they’re saying) and interests (why they’re saying it). On the surface, Russia and Venezuela are touting a strong relationship based on multipolarity, the idea that no one country reigns supreme in the world. For Russia, this primarily means having control in the post-Soviet arena, what the Kremlin considers to be its de facto sphere of influence. For Venezuela, this means preventing the United States from having control over its internal affairs.

In 2008, on a diplomatic visit to Venezuela, Russia’s Vladimir Putin claimed that Latin America is, of course, “an obvious link in the chain making up a multipolar world.” A few months later, in a separate visit, Dimitry Medvedev also stated in an appearance with socialist leader Hugo Chávez that the two countries, “share a common desire for a multipolar world, not a unipolar one.” While superficially, these statements are abstract and non-committal, they, in fact, belie the ulterior motives of each country.

In negotiations, it is important to understand why each party is doing what they are doing. Understanding each party’s interests, i.e., the “why,” reveals the true nature of the bargain and the intentions of its participants. In the Russo-Venezuelan negotiation, the “why” is different for each country. For Venezuela, negotiating a partnership with Russia is a means of ensuring regime security. However, for Russia, negotiating a partnership with Venezuela means economic and geopolitical access.

In 2007, Chávez returned to the Venezuelan presidency for a second term in office. The populist leader, although a favorite among the Venezuelan people, was a target of condemnation for Western leaders. Chávez harbored a deep paranoia of U.S. invasion and internal revolt, likely stemming from the attempted 2002 coup. The two-day April coup attempt saw the temporary overthrow of Chávez by civilian and military coalitions, an event that was attributed in Venezuela as a sinister plot orchestrated by the George W. Bush government to instigate regime change.

To mitigate fears of invasion, the Chávez government underwent a total military overhaul and spent billions in oil revenue to purchase tanks and warplanes. Moreover, Caracas declared plans to enlarge its military forces to two million members. By 2013, Rosoboronexport, Russia’s official arms exporter, had sold around $11 billion in weapons to Venezuela on credit.

To further secure his leadership against the U.S. threat, Chávez also strategically began reaching out to Russia to expand the bilateral partnership. During Chávez’s second term, both diplomatic visits between Russian and Venezuelan leaders, as well as Russian direct investment into the country, increased. Russia and Venezuela conducted their first joint naval exercises on Venezuela’s Caribbean coast in November 2008 and, in that year, Chávez signed an agreement to purchase two Russian Ilyushin II­-96 300 passenger jets for executive travel.

In a show of solidarity to Russia, Venezuela also became the third country, after Nicaragua and Russia itself, to recognize Russia’s illegal annexation of Georgia’s Abkhazia and South Ossetia in 2009, one year after the event. Additionally, in 2014, the Venezuelan government recognized a Russian Crimea just weeks after the initial invasion into Ukrainian territory.

Today, Russia’s increased investment and interest in Venezuela gives the Maduro regime inherent protection against U.S. invasion. By inviting Russia into the region, Venezuela is effectively creating a new target for U.S. hostility, thereby diverting U.S. pressure away from the Venezuelan government and onto Russia. This is a strategic move because it also creates value for Russia by granting it regional access and influence.

For Russia, Venezuela’s importance is both economic and geopolitical.

Rosneft, the Russian state oil company, has invested billions into Venezuelan projects—$9 billion alone since 2010—in hopes of a titanic return on investment. However, Venezuela, once the oil kingpin of Latin America, peaked in productivity in 2011 and has plunged into a deep recession. While the South American destination was once a promising partner for Russian investors, it is now a sinking ship whose tether cannot be cut loose. Venezuela owes Russia billions and rather than walk away from the losses, Russia is still seeking ways to regain control of the situation. Furthermore, Venezuela’s dilapidated infrastructure has prompted Rosneft to take greater control on the operational front by expanding its joint ventures with PDVSA, the Venezuelan state-owned oil and gas company. By integrating itself into Venezuela’s oil infrastructure, Moscow is hedging its bets to ensure that Venezuela, whether it be Maduro or someone else, pay off its debt.

Geopolitically, Russia’s game in Venezuela and Latin America is an old one. Since the Cold War, Russia has been taking measures to force the United States out of the region and open it up to third-party influence. By solidifying relations with Venezuela and other Latin American countries, Russia gained strategic access to Latin American ports and other important infrastructure, including Russia’s GLONASS satellite station, planted strategically on Nicaraguan soil.

Furthermore, with significant investment and presence in Venezuela, Russia has a growing stake in the political future of South America. With Venezuela teetering on the brink of collapse, Russia is poised to take a role in the shaping of both the country’s and the region’s political future, along with, of course, collecting on its debt.

In Latin America to Stay?

Russia’s deal with Venezuela is not unique. Russia has interests in Latin America spanning as far as the Southern Cone and is using similar negotiation tactics to gain influence and access across the region. Like Venezuela, Nicaragua also has abnormally strong relations with Moscow based on regime security for the long-time Nicaraguan leader, Daniel Ortega. Russia is also expanding in Bolivia by increasing the presence of Gazprom, the Russian energy magnet. Additionally, in the backdrop of all of this, Russia is undergoing a soft-power campaign to expand its cultural influence in the region.

Sifting through the Kremlin’s jargon and uncovering Russia’s true interests in Latin America is essential to understanding why and how Russia operates in the region. Viewing Russia’s presence in the Western hemisphere as an ongoing negotiation, has, so far, revealed one important characteristic about Russia’s negotiating style—as long as Russia still has cards to play, it will, for better or for worse, remain at the negotiating table.

Taylor Valley is the Coordinator of the Negotiation Task Force at the Davis Center for Russian and Eurasian Studies at Harvard University, and a Senior Associate at Negotiation Design & Strategy (NDS), a training, advisory, and research development group. Taylor received her Master’s degree from Harvard University in Russian, Eastern European, & Central Asian studies where she wrote her thesis on contemporary Russo-Latin American relations.