Why Waiting for Russia to Collapse Is a Terrible Ukraine Policy 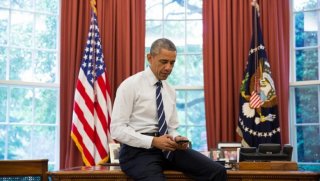 Two months ago, a number of senior U.S. national-security officials insisted that the Russian Federation has reemerged as the premier existential threat to American interests. Today, as energy prices continue to tumble and China's economy falters, a new narrative has emerged: the pending collapse of Russia itself, or at least the prospects that the government of Vladimir Putin is entering into its last days. The continuous oscillation in views—Russia as a powerful threat, Russia as an imploding basket case—does not permit a cool, rational assessment of Russia's actual strengths and weaknesses.

Let's first start with the economic indicators. Russia's economy is contracting, its currency is losing value vis-à-vis the dollar and the euro, and its industrial output is showing signs of decline. Because of the conflict in Ukraine, Western sanctions remain in place against Russia. The second round of collapsing energy prices further decreases the revenues available to the Kremlin—although the devaluation of the currency has helped to partially compensate for this since energy exports are priced in and generally paid for in dollars and euros. And Putin's lifeline against Western sanctions—more than $100 billion in deals, credits and loans with China—has been compromised by China's own economic woes. Inflation is eating away at the savings and purchasing power of Russian citizens. Between devaluation, Western sanctions and Russian countersanctions, imports have become either more expensive or have disappeared altogether, while domestic substitutes have not generated sufficient replacements.

These basic facts are not in dispute by most people ranging from Kremlin ministers to vociferous Putin opponents. What these developments may portend, however, is open to interpretation.

In one narrative, the declining economy will galvanize widespread public opposition to the Putin government, as hundreds of thousands of Russians are set to fall below the poverty line. Declining commodity prices make it much more difficult for the Kremlin to be able to distribute financial support to a number of the economically strapped regions of Russia, depriving the government of one of its more effective tools for managing local unrest. The cratering economy will also negatively impact the fortunes and livelihoods of the Russian elite, particularly as sanctions cut into their ability to maintain access to Western sources of goods and services. The Kremlin will come under tremendous pressure to reverse its foreign-policy choices—starting with supporting separatists in Ukraine and aiding the regime of Bashar al-Assad in Syria—in order to shore up its economic base. Spending on military rejuvenation will have to end. Moreover, some have even begun to speculate about a combination of mass public protests and elite maneuverings coalescing in Putin's very removal as president.

The seductiveness of such a narrative to Western governments is apparent. For the last year, American and European leaders have solemnly warned about the dangers posed by Putin to Euro-Atlantic security, yet the rhetoric has still not been completely matched by decisive action. There have been some rotations of forces and equipment to the eastern frontiers of the NATO alliance, but no permanent pivot back to Europe, and in fact, the United States continues to withdraw personnel. Many European governments have still not increased defense spending while some continue to cut such expenditures. Ukraine has received only a fraction of the aid it needs and almost none of the military assistance it has requested to push back the separatists. A narrative that a collapsing Russian economy, however, is going to deliver Moscow's complete reversal on Ukraine and may even lead to regime change in the Kremlin itself—and in a matter of months—takes Western governments off the hook. The West need not "do" anything more, but simply wait for the Russian collapse, in a repeat of what happened to the Soviet Union thirty years ago.

It seems quite dangerous, however, to base policy towards Russia on assumptions of a forthcoming economic disaster. The Russian economy is slated to enter a period of extreme austerity, but even with the declines, there is nothing that resembles the catastrophe of the 1990s, with GDP being nearly halved. Declines are still predicted in the single digits—indicating future hardships, not outright collapse. It is also not clear that popular unhappiness will translate into sustained anti-government unrest. Here, the failure of the West to develop a rapid, comprehensive Ukrainian rescue package plays a critical role. Russians are well aware of the tremendous economic hardships Ukraine is facing in the post-Maidan period and that Ukraine has not been given any significant help to put it on a path to prosperity, which may temper enthusiasm for any sort of revolutionary activity. Russian media has also consistently covered the prolonged economic crisis in Greece and other EU member-states, sending a very strong signal that not only would there be no real reward for Russia if Putin were to be removed, but that Russia could face even worse economic conditions than the current austerity they must undergo. Given the conservative and risk-averse nature of Russian political culture, grumbling and protests about current conditions may not in fact translate into sustained action for political change.

Nor does it appear that Putin is prepared to let an economic crisis go to waste. Indeed, the silver lining is that he, like President Xi Jinping in China, can use economic failure as a way to push for members of the elite to hand in their resignations and enhance his own authority. As we have seen with the removal of a close Putin ally and partner, Vladimir Yakunin, from his position as head of Russian Railways, poor economic performance may indeed give Putin the ability to begin implementing a plan of systematic replacement of cadres to bring in younger talent. At the same time, Yakunin's expected appointment to the Federation Council suggests the provision of "golden parachutes" where those who are prepared to cooperate in their removal are given guarantees of retaining some status (as well as immunity), which could help to mitigate possible opposition.

Yes, the economic crisis does affect Putin's ambitious military spending plans—with further postponements now all but guaranteed. Yet this should not cause any premature rejoicing. Putin has sufficient wherewithal in place to continue his activities and to maintain what Michael Kofman has termed "the power to annoy.” And even if Russia moves into terminal decline, it will still be able to cause a good deal of damage, if it chooses, for the foreseeable future.

The "Russia problem" is not going to take care of itself. There are serious strategies put on the table for both engagement and confrontation with Moscow—but both require time, resources and commitment. The search for a low-cost, consequence-free approach to Russia—which has been on display ever since the Ukraine crisis flared last year—does not find its answer in gambling on a Russian economic collapse.