Why War with North Korea Could Cost Trillions of Dollars 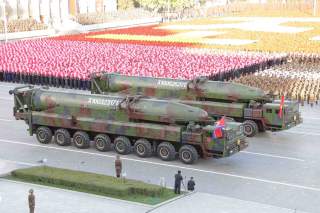 War with North Korea could result in the death of fifty thousand or more Americans and more than two million Korean casualties. However, the economic cost would be massive, too, running into potentially trillions of dollars for the United States, while damaging Asia’s biggest economies.

The 1950–1953 Korean War caused 33,651 U.S. casualties and cost the United States an estimated $20 billion. For South Korea, it caused 1.2 million deaths and saw the value of its gross domestic product (GDP) slump by more than 80 percent.

However, the cost of a second Korean War would be far greater, according to Capital Economics.

At its peak in 1952, Washington was spending around 4.2 percent of U.S. GDP fighting the Korean War. While Pentagon officials believe another war on the Korean Peninsula could be finished far more quickly, reducing the likely casualties and cost, there is a risk that the conflict could last much longer.

The Iraq War that began in 2003 was predicted to last only a few weeks, but it was not until December 2011 that the last U.S. military personnel left the Middle Eastern nation. The total cost of the war, which was originally forecast at $60 billion, ended up at nearly $1 trillion (5 percent of U.S. GDP), according to estimates by the Congressional Budget Office.

The cost of reconstruction could also be “enormous,” Capital Economics argues.

“After the most recent wars in Iraq and Afghanistan, the US government spent around $170 billion on reconstruction. South Korea’s economy is around 30 times bigger than these two countries’ GDP. If the US were to spend proportionally the same amount on reconstruction in South Korea as it did in Iraq and Afghanistan, it would add another 30 percent of GDP to its national debt,” the London-based consultancy says.

“The upshot is that a prolonged war in Korea could significantly push up federal debt in the US, which at 75 percent of GDP, is already uncomfortably high.”

Increased U.S. federal debt would put pressure on Washington to cut spending or raise taxes, or a combination of both, which would counteract the plans of “Trumponomics” to deliver lower corporate taxes and greater infrastructure spending.

North Korea’s conventional forces include seven hundred thousand men under arms and tens of thousands of artillery pieces, while it is also estimated to have around twenty nuclear bombs as well as chemical weapons. With Seoul located just thirty-five miles from the North Korean border, the South Korean capital could suffer substantial losses, particularly given that it accounts for about half the nation’s population and economy.

As the world’s eleventh-largest economy, South Korea is bigger than any other country that has experienced a military conflict on its own soil in the past seventy years. A 50 percent fall in South Korea’s GDP could knock a percentage point off global GDP, while there would also be substantial disruptions to trade flows.

South Korea is heavily integrated into regional and global manufacturing supply chains, which would be severely disrupted by any major conflict. Capital Economics sees Vietnam as the worst affected, since it sources around 20 percent of its intermediate goods from South Korea, but China sources over 10 percent, while a number of other Asian neighbors would be affected.

South Korea is also a major automotive producer, accounting for about 5 percent of global vehicle production, as well as being home to the world’s three largest shipbuilders. South Korean shipyards would likely be targeted by North Korean attacks, potentially crimping the supply of vessels to the world’s liquefied natural gas (LNG) and other industries.

For U.S. companies such as Apple, electronics supplies from South Korea could be badly disrupted by war, especially since many factories are within easy reach of North Korean artillery. About 12 percent of Apple’s suppliers are from South Korea, according to Bloomberg, while many other companies would face production difficulties should the flow of South Korean intermediate goods suddenly be blocked.

Capital Economics expects this to result in a sharp rise in the price of electronics, including smart phones, cameras and computers, which could add a percentage point to U.S. inflation while reducing consumer purchasing power. Central banks such as the Fed might be forced to hike interest rates in response to an inflation spike.

Energy markets could be hit, particularly oil, given that around 65 percent of Asia’s refining capacity is located in Japan, South Korea and China. Oil and gas markets would also be affected, according to consultancy Wood Mackenzie.

“In the event of any conflict, China could more readily tap into its domestic coal and gas resources, but Japan and South Korea could be left wanting given their large dependence on imports, and their usual practice of not maintaining large stockpiles. The threat of conflict could help drive restarts in Japan's flailing nuclear industry,” Wood Mackenzie analyst Chris Graham said.

Global shipping may also be severely disrupted, since nine of the world’s ten busiest container ports, including South Korea’s Busan, are in Asia. China alone accounts for 13 percent of global exports and is the biggest single supplier to the United States.

“The Pacific would be shut down as a highway for global trade,” international relations expert Dennis Halpin warns.

Financial markets have largely ignored the Korean crisis in 2017, with only a small uptick in “safe-haven” assets such as gold, U.S. Treasuries and the Japanese yen, while South Korean stocks have risen by 16 percent this year.

However, a full-scale conflict on the Korean Peninsula would likely see stocks slump along with emerging market currencies, with a surge in safe-haven assets.

The disruption to the global economy could drag out, depending on how long it took for key factories to be rebuilt. Replacing the display manufacturing capacity of South Korea’s LG and Samsung alone could cost $50 billion, according to analyst Alberto Moel.

South Korea has previously estimated that the cost of rebuilding the North and preventing mass migration following reunification at around $1 trillion, the equivalent of its annual GDP and about two to three times the cost of German unification.

However, should the North Korean regime collapse, South Korea would obtain some economic benefits, including access to the North’s natural resources, lower defense spending and improved demographics due to the North’s younger population.

China, the world’s second-largest economy, and Japan, the world’s third-largest, would also suffer the fallout of a Korean conflict, depending on the nature of the conflict. For China, the disruptions to shipping lanes could threaten its exports, while it would also face the loss of North Korean trade, which it dominates.

Japan faces the risk of a strengthening currency, which would dampen exporters’ profits along with Tokyo stocks, as well as the threat to supply chains in Asia.

Notably, China, Japan and the United States are the three largest exporters to South Korea, while North America was the biggest recipient of foreign-direct investment from South Korea in 2016, amounting to over $19 billion.

While speculation continues over the potential endgame for North Korea, unleashing “fire and fury” as threatened by President Donald Trump would come at a very high cost in both human and financial terms. With America still paying the price of the “war against terror” in Afghanistan and Iraq, another major conflict would tax the world’s biggest superpower to its very limit.