Why Washington Doesn't Get Brazil 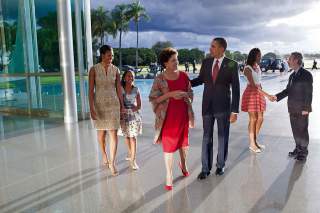 Donald Trump’s victory, and the emergence, in September 2016, of a new government in Brazil following President Dilma Roussef’s impeachment, provides a compelling opportunity to discuss important aspects of the U.S.-Brazil bilateral relationship.

The fact is that over the past fifteen years, both countries have turned their backs on each other and quietly boycotted initiatives undertaken by the other side.

Brazil does not have a coherent U.S. policy. Brazilian decisionmakers tend to believe that any form of alignment or alliance with the United States, as pragmatic as it might be, automatically rules out a legitimate and functional global multilateral strategy. They wrongfully see a structural incompatibility between Brazil's quest for greatness and its desire to promote a global order that favors its aspirations, and Washington's constraining influence and interest in preserving the current international order. This anti-American mindset is counterproductive, as it tends to see U.S. foreign policy initiatives as the unilateral acts of an imperial and arrogant hegemonic power aimed at preventing the emergence of new actors in the international system, and frustrating their goals and potentialities.

This stance has led Brazilian policymakers to develop a rather schizophrenic policy towards the United States, rendering them unable to define the nature of Brasilia’s relationship with Washington. Does Brazil want to be seen by Americans as a competitor, perhaps even as a rival, or as a reliable strategic partner? Does Brazil want to be seen as a regional leader or a global revisionist power? Does Brazil wish to forge closer ties to the United States – which does not imply any notion of subordination, automatic alignment or unconditional support – or does it prefer to be a strategic adversary, distancing itself from the world’s (still) sole superpower?

Likewise, the United States does not see Brazil as a priority. This, despite the fact that Brazil is the world’s fourth largest democracy, fifth most populous country, and the seventh-largest economy, and accounts for approximately 60 percent of South America's GDP, 47 percent of its territory and 49 percent of its population. Washington has confined Brazil to the ghettos of its foreign policy. Although successive American presidents have diplomatically considered Brazil “a natural partner,” in practice it has been put in a grey zone — neither an ally, nor a threat, nor a reliable partner.

American decisionmakers in general seem to display a remarkable incapacity – or unwillingness – to recognize the political and economic evolution of a rapidly emerging country which seeks to become a relevant and active player in the world, and to adapt U.S. long-range diplomatic strategies to that new reality.

Without a specific Brazil policy, U.S. diplomacy tends to consider any lack of Brazilian support for American priorities and interests as an outright affront. Likewise, Brazilian diplomatic initiatives aimed at raising the country’s profile and strengthening its regional and global clout are usually received unenthusiastically and, sometimes, even with hostility. Instead of welcoming Brazil’s political and economic growth as an opportunity to establish new strategic dialogues, Washington seems to regard it as a challenge or a threat to U.S. regional hegemony and aspirations.

The ambivalence of Brazilian foreign policy towards the United States, which Brasilia always seems eager to contradict, and Washington’s apparent lack of interest in Brazil’s ambitions and potential, accounts for why U.S.-Brazil relations, during the Roussef and Obama years, sunk to their lowest level in decades. The disclosure of National Security Agency spying activities in Brazil, particularly on former President Rousseff and the state-owned oil company Petrobras in 2014, only deteriorated bilateral relations even more, burying it under a thick crust of ice.

So while in principle both countries share many global concerns and commitments to common values, more often than not, their worldviews are not aligned, their priorities conflict, and their policies diverge. Neither Brazil nor the United States benefit from this situation.

Significant policy divergences do exist, but there are no insurmountable differences between the United States and Brazil. Despite asymmetries in their global power positions, the potential for a productive partnership is enormous. As U.S. foreign policy focuses more on economics, for example, Washington’s relationship with Brazil assumes greater importance. Brazil is not only one of the world’s fastest growing markets, despite economic setbacks in the past few years, it is also one of the few countries that enjoys a consistent trade surplus. The United States is the largest investor in Brazil and the main destination of the country’s value added exports. If trade and economic growth are U.S. interests, failing to forge a stronger partnership with Brazil will prove to be a huge lost opportunity.

From a more strategic perspective, closer ties between the two countries could disincentivize China from using its impressive economic leverage on the region to convince governments against cooperating with the United States. The same is true regarding Iran’s aggressive public diplomacy in the region.

Brazil also represents a source of political, democratic, and economic stability in Latin America. It has struggled, however, in turning South America into a real “peace zone.” This task would become significantly less complex with the political and financial support of the United States. Likewise, the fight against organized crime, drug trafficking, corruption, money laundering, and other transnational illegal activities could be remarkably more effective if security cooperation were put in the framework of a broader strategic dialogue that supported the interests of both nations and strengthened the Western Hemisphere.

There is clearly a need for constructive collaboration between Brazil and the United States as anchors of consolidated democracy and human rights defense, and drivers of economic development and stability in the Americas. It is a great exercise of imagination, for example, to envisage a scenario in which Brazil will accomplish its greatest foreign policy objective — a permanent seat on the UNSC — without American support or, at the very least, without its opposition. Likewise, it is not clear how the United States can realistically hope to enlist Latin – and particularly South – American countries behind its regional and global projects without including the region’s most important country in its strategic calculations or without providing large-scale public goods, significant economic benefits, trade concessions, military protection and assistance, and other incentives that the region desperately needs.

Brazil thus seems to be strategically fundamental to the security and prosperity of the United States. It would be better for U.S. policymakers to carefully scrutinize Brazil’s potential as a long-term strategic partner now, when a new administration is about to take over in Washington, rather than doing so at a much greater cost in the future.

Marcos Degaut is a Political Advisor at the Brazilian House of Representatives, Co-President of the Kalout-Degaut Institute of Politics and Strategy, former Intelligence Officer, and Research Fellow at the University of Central Florida. He served as Assessor to International Affairs at Brazil’s Presidency of the Republic, Deputy Head of International Affairs at the Superior Court of Justice, and Secretary General of the National Judicial School.