Why the World Should Fear Trump’s UN Moves Against Iran 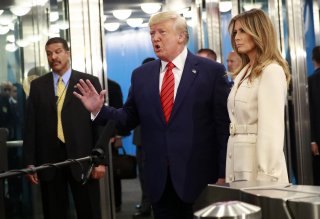 President Donald Trump is unwavering in his commitment to a “might is right” approach to international relations. His administration has explicitly had it out for multilateral arrangements, from UNESCO, the WHO, the International Criminal Court, the Paris Climate Accords, the Trans-Pacific Partnership, and others. Now, the White House’s relentless drive to increase pressure on Iran threatens to shatter the vital role the UN Security Council (UNSC) plays in the international system.

The Trump administration’s ham-handed efforts to insist that the coronavirus be called the Wuhan virus have already limited the Security Council’s ability to function amid the greatest twenty-first-century threat.

Now, as made clear in a talk by the State Department’s Special Envoy to Iran Brian Hook at the Heritage Foundation, the Trump administration seeks to force the reimposition of UN sanctions on Iran. Such an action is further evidence that the UNSC is breaking, thanks to the Trump administration’s bull-headed and self-defeating campaigns.

Secretary of State Mike Pompeo’s preeminent goal as secretary of state has been to compel the collapse or capitulation of the Iranian government. Having failed in this aim despite two years of a far-reaching “maximum pressure” campaign, Pompeo now wants to use the issue of the looming expiration of a UN arms embargo on Iran to increase sanctions.

Pompeo intends to cite the inevitable rejection of a new arms embargo by the UNSC as a reason to unilaterally force the imposition of UN sanctions against Iran. Doing so gives Pompeo a chance to kill the Iran nuclear deal and complicate its resuscitation by a Joe Biden administration.

Pompeo’s gambit not only creates many risks in terms of escalating the crisis with Iran, but it will also mark an unprecedented assault on the UN Security Council.

The U.S. would effectively be hijacking the UNSC process and going against the will of the other permanent members, threatening the prevailing world order that has existed since World War II.

Pompeo’s proposition will harm both the United States and the international system. In order to “snap back” UN sanctions on Iran, he seeks to argue that the United States is still a “participant” in UN Security Council Resolution 2231, which endorsed the 2015 Iran nuclear deal, despite the Trump administration reneging on that agreement in 2018.

The “snap back” measure in Resolution 2231 gives JCPOA participants the ability to reimpose past UN sanctions against Iran if Tehran violated the nuclear deal, provided that they worked through the deal’s dispute resolution mechanism. Pompeo wants to draw on this mechanism from outside the accord even as traditional U.S. allies in Europe continue to keep the deal alive.

The EU and Russia have already said they do not view the United States as a participant in Resolution 2231 and that consequently, it cannot trigger snapback. The stage is set for an ugly fight at the UNSC that will further strain the fraught trans-Atlantic alliance.

Even if Pompeo fails, he will be setting back U.S. interests by further eroding trust in the United States. The snapback mechanism negotiated by the Obama administration marked a significant diplomatic achievement by allowing the U.S. to easily reimpose UN sanctions if Iran cheated. By blatantly distorting and abusing this mechanism, Pompeo is handing Iran a powerful argument to not agree to a similar measure in any future deal and eliminating a powerful U.S. leverage tool.

If Pompeo succeeds and triggers snapback, then the consequences will be severe in the short and long-term. In the immediate aftermath, Iran will likely decisively break the confines of the nuclear deal and significantly expand its nuclear program. It will seek to boost its nuclear bargaining chip: increasing its stockpile of enriched uranium, level of enrichment, and the number and type of centrifuges it has enriching uranium.

Iran would drastically be reducing its breakout time, or the amount of time it would need to amass enough fissile material for a single nuclear weapon should it decide to dash for the bomb. The nuclear deal extended Iran’s breakout time to one year. It is currently estimated to be at six months, with Iran having already ceased compliance with aspects of the deal in response to the Trump administration’s wholesale abrogation of the agreement.

Iran has also threatened that snapback would lead to it withdrawing from the nuclear nonproliferation treaty, which commits it to not developing nuclear weapons. Notably, this is the path North Korea took to developing nuclear weapons. Iran would no longer be under a legal constraint to not build the bomb. The Iranian nuclear crisis would return with a vengeance, and without a diplomatic off-ramp in sight.

The downsides of the United States forcing the return of UN sanctions against Iran may be even more consequential for the world. It is no secret that the Trump administration has sought to undermine the norms of multilateralism that have long moderated global behavior. But weakening the UN Security Council will dangerously alter the international order as it has been known.

The UN Security Council is the most important multilateral institution engaged in global governance and cooperative rule-setting. Created in the aftermath of two successive and catastrophic world wars, the council’s legal structure of giving veto power to the major world powers has helped maintain peace between major powers for over seventy-five years. Its decisions mark the highest level of international law.

The raison d'être of the UNSC is to prevent the unilateral use of force by countries. The council relies on consensus decision-making among the five permanent members, ensuring the world’s most powerful countries are constantly in dialogue over pressing security matters. The council’s approval is required to launch wars and the resolutions it passes are binding on all UN members.

Crucially, the veto power the UNSC affords the United States, China, Russia, the UK, and France gives these leading powers a stake in the global order. This helps obstruct zero-sum competition from taking hold among them, which could easily spiral into the kind of worldwide conflicts that reaped immense suffering in the last century.

Notably, powers like the U.K. and France are given disproportionate influence globally by the UNSC relative to economic and military prowess, especially in comparison to countries like India and Brazil. They would stand to lose the most from a weakened UNSC.

The prospect of a punitive UNSC resolution (the return of UN sanctions against Iran) being implemented against the will of most of the council would mark a turning point for the current global order. The consensus-driven body will be faced with abiding by sanctions that most of its members oppose. Many countries will question their validity and continue discrete trade with Iran.

The precedent will be set for countries, even the major global powers with a stake in the UN, to ignore a UNSC resolution. The United States will be tarnishing the credibility of the UNSC, taking the post-World War II economic and political order into dangerous and uncharted territory. This may play into the broader aim of Trump and his “America First” acolytes but would be supplanting the norms of global cooperation for the law of the jungle.

A dysfunctioning UN Security Council will make it even more challenging to address the major crises facing the world: the ongoing coronavirus pandemic, the North Korean nuclear weapons program, and climate change, among others. Instead, at a time of increased competition between the United States, Russia, and China, the world will be bereft of an effective and strong institution that helps mend their disputes.

Multilateralism Must be Safeguarded

The Trump administration revels in the unparalleled power of the United States but mistakes power for influence. The hubris of Trump and his senior officials have manifested in the pursuit of aims that are damaging the multilateral institutions that play a key role in securing global peace and stability.

The arms embargo issue over Iran is a red herring. An Iran impoverished by economic sanctions will not suddenly be able to purchase vast amounts of Russian and Chinese arms and upset the regional military balance of power, which is decisively stacked against it. The Trump administration’s broader animus against multilateralism is turning the United States into a predatory state and ushering in a more dangerous world order.

Congress and traditional U.S. allies in Europe should not abet Trump’s destabilizing actions by falling for the bait of increasing pressure on Iran.