Will America Defeat the Islamic State? 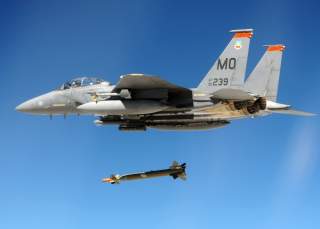 How will the success or failure of the Allied campaign against Islamic State (IS) be judged, whenever our involvement in the fighting finally ends? This depends on the criteria of “victory” and “defeat,” which need to be reconsidered in the wake of our interventions in Afghanistan, Libya and Iraq and as a result of contemporary technological developments.

The success or failure of a military operation has previously been judged by two central criteria. Firstly, has the enemy suffered a military defeat in the field, and if so, is it a defeat of enduring material losses and perhaps psychological damage? Another question (much more difficult to answer) follows: was any such victory in the field worth the cost? But both of these questions need to be looked at from a wider perspective than ever before.

For example, enemy fighters might succeed in slipping away into other regions, perhaps resurfacing at some future point to create, or fuel, other conflicts. It is exactly such fluidity of movement and, in some cases, of allegiance that has helped to create the Islamic State: many of the 20-30,000 soldiers in its ranks are believed to have been veterans of Saddam Hussein’s armed forces and law-enforcement agencies. Years after their initial defeat in 2003-4, these very soldiers have formed an effective fighting force.

This might be termed a military “balloon effect”: squeezed in one place, a determined enemy can reappear in another. The same phenomenon occurred after the U.S.-led invasion of Afghanistan after 9/11. Instead of meekly surrendering and returning to civilian lives in Afghanistan, many Taliban insurgents subsequently migrated to Pakistan and Kashmir, where they helped to fuel local insurgencies that were (and remain) just as inimical to Western interests as the Taliban-led fight against Coalition forces in Afghanistan.

Such eventualities in both Iraq and Afghanistan dashed the hopes of the strategic architects of war, who hoped and claimed that the enemies of American intervention would simply reintegrate into civilian life in the same way that the Japanese and German nations had done after 1945. Not all of these militants have either returned to their homelands or else resumed their war against the Kabul government, and this means that it will be some time before the effectiveness of the American-led war there can be judged.

In other words, one of the criteria of contemporary victory is to ask if an enemy force has been conclusively beaten in the field—or if it has merely sidestepped the full force of an attack. There are several reasons why this is a more important question to ask in today’s world than in earlier decades.

The tendency of conventional and insurgent enemies to reappear in other theaters of war is most likely a consequence of regional lifestyles and geography. In sharp contrast to Western Europe or Japan, there are large parts of the Middle East and Southwest Asia that are ungoverned and ungovernable. Disgruntled or actively hostile individuals or local populations are, therefore, able to consider moving to other regions where they can continue with, or initiate, an armed struggle against a perceived enemy.

But another key difference concerns local standards of living. In developing countries, where such standards and expectations are relatively low, individuals may think they have little or nothing to lose, but perhaps much to gain from abandoning what they already have to undertake or continue an armed struggle. In relatively prosperous countries, or in countries where there are higher expectations of a better standard of living, the opposite is true. Iraq and Syria clearly fall into the former category. This means that the success or failure of the U.S.-led military operation against IS can only be judged some considerable time after its cessation.

A final reason concerns America’s massive military superiority against such enemies. Insurgents, or indeed other conventional armies, do not have much chance of surviving, let alone winning, any battle against armed forces as sophisticated as those of the United States or other armies of the developed world. It is simply more sensible to beat a retreat, find sanctuary and then return to take up arms at a later date.

The same factors that allow people to “balloon” from one region to another also enable weapons to do so. Militias can carry or transport armaments either to continue with their armed struggle elsewhere, or to sell them on a lucrative black market. This is a characteristic of nearly every insurgent war that takes place in more remote regions where weaponry can more easily disappear into a black market. After the Soviet invasion of Afghanistan in 1979, the whole country and much of the wider region became awash with weapons. Small arms also proliferated in the Balkans after the outbreak of civil war in the early 1990s. Huge quantities of such weaponry are believed to have been spirited into Albania in the mid-late 1990s as neighboring Kosovo became increasingly unstable.

Any enemy, whether insurgent or conventional by type, that shifts its location to survive an American onslaught, can also easily leave behind an ungoverned space. But it is into just such a vacuum that an existing enemy can easily step or a new one—perhaps an even more deadly enemy—can appear and thrive. At the very least, such a vacuum is likely to exact a high humanitarian price, since criminal gangs easily step into the void of governance.

It is this question—has intervention created an ungoverned, or indeed an ungovernable, space?—that represents just one further criterion that should define the success or failure of the operation against IS, or any enemy.

An example of the issue’s importance is NATO’s air war in Libya in 2011. The bombing operations that started in March were initially intended only to protect hundreds of thousands of civilians, who had protested against the regime of Colonel Gaddafi, from the bloody vengeance of the Libyan leader. But the air operations also started to provide support for Gaddafi's enemies who now rapidly gained strength against his forces and toppled the regime in October.

The campaign was initially hailed as an overwhelming success. Within months, however, the opposite occurred: anarchy spread and criminal gangs, and Islamist militias, had stepped into the void. In August 2014, the Egyptian foreign minister Sameh Shoukri acknowledged how big a threat lawlessness in Libya had become: “We have felt the direct effects of the escalating Libyan situation on the security of neighboring countries through the presence of extremist and terrorist elements which extended to other countries through arms dealing and trafficking,” as he told an international conference in Cairo.

Much also depends on how a campaign has been fought. Consider the impact of new technical innovations such as Facebook, Twitter and internet sites. Twenty years ago, notably at the time of starvation and famine in Somalia in 1992-3, there was growing awareness of the “CNN Factor.” News channels were able to use satellites to beam instant and powerful images of suffering and war from one side of the world to another, stirring a public clamor for a foreign-policy response that was perhaps wholly inappropriate and ill-advised. The premise of this “CNN Factor” was that Western audiences would put pressure on their own governments to act, or to cease acting, as a result of what they saw on their screens at home.

Today, however, the ubiquity of mobile phones, capable of taking photographs and instantly transmitting them onto the internet, and computers has changed this emphasis. An enemy is now capable of proactively beaming these images to its own chosen audience of what another country is doing. Two decades ago, this was not such an issue because many of America’s enemies—perhaps rural, impoverished insurgents—did not have access to televisions and satellite dishes. Certainly, President Obama has admitted that the Islamic State is “very savvy” in its use of social media, helping it to recruit new members from the rest of the world “who believe in its jihadist nonsense.”

Copycat attacks are a sign of this. It is no coincidence that insurgent attacks by one group or individual are often mirrored, soon afterwards, by others. An example is the attack on London made on 21 July 2005—”21/7”—just days after the deadly 7/7 attacks killed fifty-two. A gruesome example is the contemporary phenomenon of beheadings: the beheadings of several Western hostages in Syria and Iraq in recent weeks have also been followed by similar attacks on a French citizen in Algeria—on September 24—and within the United States in Moore, Oklahoma the following day. The same “copycat” mentality is plain to see from the way that IS parades its Western hostages in Guantanamo-style jumpsuits.

Before undertaking military action, the architects of war need to judge whether their putative enemy is capable of transmitting images of war and violence. Is their enemy skilled and knowledgeable about gathering and then transmitting such images in the way that is true of, for example, Al Shabaab in Somalia? If so, what sorts of images will a particular attack generate? Can alternative tactics, less conducive to such a high media fallout, be devised and implemented? Likewise, after a campaign, a metric could be devised that factors both the quantity of such images that an enemy has taken, as well as the “quality”: the “quality” would weigh up, for example, just how deeply a particular attack has touched sensitivities. A drone attack on an innocent family would score highly in this regard.