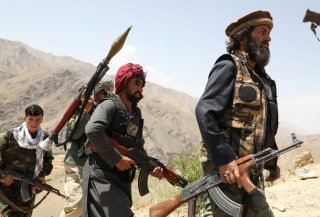 MAZAR-I-SHARIF, Afghanistan—It’s something of a grim domino effect. Afghanistan is rapidly falling back to Taliban control, as the bulwark insurgency advances into cities across the embattled nation, killing hundreds and displacing hundreds of thousands more.

While much of the U.S.-led, almost two-decade war has focused on Afghanistan’s southeast border with Pakistan, the Taliban this time around has been able to storm through the once iron-clad, anti-Taliban pockets of the northern resistance—dishing up a massive morale blow.

However, all is not lost.

It was the conglomerate of northern warlords dubbed the “Northern Alliance” that the United States relied upon to enter Afghanistan in the immediate aftermath of September 11, 2001, and to then quickly usurp the Taliban government from power.

Today, that rag-tag amalgamation of homegrown, volunteer militias led by hardened anti-Soviet commanders is returning as scores of able-bodied men, not part of the traditional military, flock toward the fight after cradling whatever arms may be lingering on the black market or home closet.

And while the United States is only weeks from leaving, now could well be the crucial time for the Afghan government forces—equipped with air power—to set aside internal grievances and go full-force in bolstering these groups.

The public uprising forces have been purporting to push back the Taliban, but the battle is to date an apparent losing one. Multiple local leaders and insiders claim that the losses are not due to a lack of will or skill, but a lack of sufficient equipment and firepower.

“The Peace Process must remain the main priority, but today the Doha process is just serving Taliban’s military advance and their victory,” lamented one source closely connected to the Northern political spectrum. Our traditional partners and proven US allies in the North desperately need our supports and, they are the only remaining reliable and effective hope. To help them to protect the Republic and our sacrifices is in the national interest of the USA.”

For one, scores of fighters have pledged allegiance to former vice president and Northern Alliance leader, Marshal Abdul Rashid Dostum in the northern provinces. In the key city of Mazar-i-Sharif, which is surrounded by the Taliban and my current location, it’s not the Afghan Forces that are patrolling the city. It’s the young, public uprising forces most visible on the crowded and bustling streets, still teeming with life despite the uncertainty.

Atta Mohammad Noor, also a Northern Alliance commander, is again governing his new generation of fighters in the north. And in and around the Panjshir Valley, some 600 forces are under the tutelage of Ahmad Massoud, son of the late Ahmad Shah Massoud—a pivotal Northern Alliance chieftain strategically killed by the Taliban just days before the September 11 attacks.

While exact numbers are unclear, it is believed that thousands of uprising fighters have joined the fray in recent months as the battle intensifies.

But much of the leadership expresses the same urgent concern: we need arms.

For one, Marshal Dostum met with President Ashraf Ghani in Kabul earlier this week in pursuit of Kabul’s equipment and backing. Those connected to the northern leaders conveyed satisfaction with the meeting, yet what transpires on the ground remains to be seen.

Of course, arming local leaders is a double-edged sword and presents another slate of potential problems for Kabul.

It was the Washington-led military backing of local leaders known as the “mujahideen” in the 1980s to repel the Soviet invasion that splintered and gave rise to the Taliban in the first place. There is also a long history of ethnic gripes, distrust, and marginalization between the majority Pashtuns, Tajiks, and other smaller groups such as the Uzbeks and Hazara.

Sources connected to the Palace and National Security Directorate (NDS) told me that the process is underway to fold the uprising forces into the supervision of the NDS, the leading security and intelligence wing, rather than the military. The forces—which are believed to number more than six thousand—will be given a government salary and are expected to abide by a formal agreement. However, the timing of such a process is not clear and whether the localized fighters—who know their terrain better than anyone and have the zest to defend their own communities—will abide by central government orders.

In a similar sense, comparisons can be drawn to Iraq and the Popular Mobilization Forces (PMF). The latter was formed after an urgent fatwa was issued by Iraq’s Grand Ayatollah Ali al-Sistani soon after ISIS rampaged through and seized the country’s second-largest city of Mosul. More than 100,000 men belonging to different militias came together to work alongside Iraqi forces on the ground in the years-long offensive to wrestle ISIS from control.

While the PMF has ricocheted into its own problems for Baghdad given its staunch loyalty to Iran and hostility to Baghdad’s rule, at the time the immediate threat was ISIS.

The secondary problems, defense analysts configured at the time, would have to be dealt with later.

Which is the lesser of two evils? A potentially fractured country drawn along ethnic lines? Or an Islamic Emirate domineered by the Taliban with close ties to terrorist groups?

It’s time for the powers-to-be to decide—and quickly—as Afghanistan crumbles back into a barbaric stone age with the Taliban continuing to capitalize on those very internal tensions.