Will Boris Johnson Topple Theresa May? 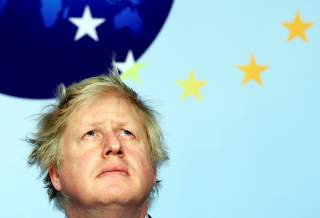 Boris Johnson, the British foreign minister, is being received like a prime minister.

Touching down in Dhaka, Bangladesh, on Friday, the UK top diplomat who once asked if it was appropriate to recite Kipling’s “Road to Mandalay” in a Myanmar temple, arrived in another former British satellite.

“Such a visit is taking place after quite a long time. We welcome him. We have a very close relationship with the UK,” Foreign Minister Abdul Hassan Mahmood Ali said.

Johnson will likely get a reprieve in the devout Muslim country: he’s spent the past week not only engulfed by speculation that he may replace Prime Minister Theresa May, but also defending London’s decision not to intervene in Bermuda’s surprise decision to reverse gay marriage. Johnson’s office says “it would not be appropriate” to stop the Bermudan move; observers have long noted that May’s team is the most culturally conservative since Thatcher. “Boris Johnson has put politics above principle in Bermuda,” wrote Jonathan Cooper in liberal standard The Guardian.

Maybe so, but May is likely not long for the job—the only thing slowing a change is that “Boris really doesn’t want to be the one to wield the knife since, notoriously, that means you lose,” noted the London Spectator’s deputy editor Freddy Gray.

What should DC make of a Prime Minister Johnson, Deputy PM Michael Gove and Chancellor Rees-Mogg?

Boris Johnson, along with his frenemy Michael Gove, the environment secretary, and Jacob Rees-Mogg, Britain’s outlandish aristocrat du juor, have cobbled together a plan to end Theresa May’s largely tortuous year-and-a-half run in office. Consumed by budget negotiations and wrangles over immigration, Washington has taken little notice. But with a deal struck and signed to fund the government as of Friday morning, some attention may soon turn to London. “Mr. Johnson and Mr. Rees-Mogg are intelligent men with achievements to their name that predate their arrival in Westminster,” argues Janan Ganesh. “But neither would vie for stewardship of the party in normal times.”

But this is no ordinary American administration. Characters like Johnson and Rees-Mogg, as well as the “neoconservative” Rupert Murdoch pal Michael Gove, could be received well with the Trump administration—or at least gain some ground back from Emmanuel Macron of France. Unlike the Brits, Macron is at minimum actually able to host President Trump— and apparently further inspire the New York mogul’s desire for a military parade in Washington; the “Jupiterian” French president and the American insurgent have launched a budding bromance, to the detriment of the traditional role of the British prime minister.

“Boris Johnson and the pals—the Brexit dream team is back,” observes The Financial Times. But it may be no joke here in Republican Washington. “I love a good triumvirate,” a former Trump State Department official tells me. “New U.S. administrations are often skeptical of the incumbent British leadership because of their connection to the previous White House,” adds a national-security advisor to the Pentagon. Former U.S. President Barack “Obama was never close with [former British Prime Minister] Gordon Brown because of the Bush-Blair connection and Iraq.” Cameron and Obama appeared chummy in office, though Cameron’s political consigliere, London kingmaker and aspirant to power at Fox News Steve Hilton, says that was a mirage, at least by the end. A former White House official also adds caution, alleging: Johnson isn’t terribly impressed with Trump’s intellect.

Johnson has been widely scolded for his recklessness over his career, but he could be seen as saving Britain from even more radical option: Rees-Mogg not as a chancellor, but as prime minister himself. But a Moggian ascension is exactly what some conservatives want. Even some liberals and leftists credit him with considerable performative skills and apparent candour. “After decades in the making, Rees-Mogg's time may be coming,” said The Guardian Thursday, which earlier in the week argued that “Jacob Rees-Mogg has become the perfect politician for our confused times.” So far, however, Rees-Mogg has had to content himself with encomiums like that as May continues to cling to power.