Will British Elections Save or End the Special Relationship? 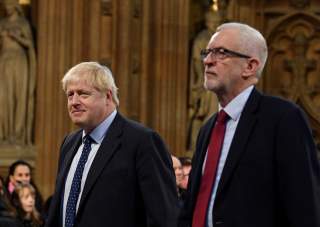 On Thursday, voters in the United Kingdom will decide between two irreconcilably opposite visions for their country. It’s an election that won’t just determine the country’s domestic policies for the next few years—it’ll also determine the fate of the U.K.’s relationship with America for years to come.

Voters have two very different ideologies to pick from on election day. On one hand, there’s Boris Johnson, leader of the Conservative Party. Johnson wants the U.K. to embrace more “dynamic free-market capitalism,” his government has pledged to lower taxes, and he generally wants the state to be less involved in the day-to-day lives of its citizens. The other option is Labour Party leader Jeremy Corbyn, a socialist politician eager to nationalize a multitude of industries, raise both corporation and income tax, and increase day-to-day government spending by more than $127 billion within the next five years—thirty-two times more than Johnson’s proposals.

Yet, as is the case with most aspects of British politics these days, everything comes back to Brexit.

The Brexit deal, which the Conservatives intend to pass through Parliament if they win a majority, would mean that Britain leaves both the European Union’s (EU) single market and its customs union. The U.K. could finally break free from the EU’s white-knuckled grip and pursue its own free-trade deals with the rest of the global economy—of which 80 percent lies outside the EU.

The term “special relationship” was first popularized by Winston Churchill in 1946 to acknowledge the close ties shared by the U.K. and the United States. And, in spite of the U.K.’s membership in the restrictive EU single market, London’s relationship with Washington has remained strong. Both countries are the single-largest investors in the other’s economy, more than 1.25 million Americans work for British companies, and over 1.5 million Britons are directly employed by U.S. businesses. In fact, the British-American trading relationship is worth more than $230 billion every year, which is more than Scotland’s entire gross domestic product.

Johnson, once a U.S. citizen by birth, is keen to further strengthen the bonds between the U.K. and America after Brexit, eyeing the creation of a free-trade deal between the two nations. Likewise, Donald Trump has also expressed eagerness to create a “very big” trade deal with the U.K. A deal of this magnitude would likely see the two nations’ peacetime relationship become closer than it has ever been.

If Labour wins next week’s election, Corbyn wants a second Brexit referendum where the two choices for the British public would be to remain part of the EU or leave with a deal that Labour negotiates with Europe. Of course, that “deal” would be for a “new customs union” and a “close single market relationship”—essentially the same relationship that Britain has with the EU now. But, this time, the British wouldn’t have any member-state voting privileges. In short, the options in Labour’s dream second Brexit referendum would be for the U.K. to “remain” or “remain, but with no voting rights.”

That’s bad news for free trade, because Labour’s plans would make it nearly impossible for the U.K. to negotiate any type of trade deal with the United States.

At least Corbyn is consistent. He’s always been clear on the type of relationship he wants between the two nations. Back in June, during Trump’s official visit to the U.K., Corbyn refused to attend the state banquet with the president, instead choosing to lead an anti-Trump protest outside of parliament.  And, as for any trade deal, Corbyn has already regarded preliminary trade talks as “sell-out negotiations” that would create “a toxic deal.” Two weeks ago, the Labour leader even went as far as to suggest that a trade deal with the United States would put U.K. lives at risk. This baseless claim comes from the idea that the United States wants to privatize the U.K.’s poorly-performing National Health Service. But the feeling is mutual. Trump, in true Trump style, regularly asserts that a Prime Minister Corbyn “would be so bad” for the U.K. and its relationship with the United States.

When U.K. citizens head to the polls on Thursday, we’ll find out if the “special relationship” is one that will continue to bring opportunity and economic prosperity to both nations, or if this beautiful friendship has come to an untimely and unfortunate end.

Alexander C. R. Hammond is a policy adviser at a London-based think tank and a Young Voices Foreign Policy fellow. You can find him on Twitter at @AlexanderHammo.