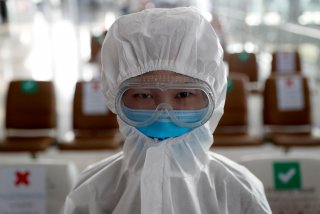 Posterity may view the May 24 press conference of Foreign Minister Wang Yi—China’s most seasoned and savvy diplomat since Qian Qichen, if not Zhou Enlai under Chairman Mao Zedong—as a watershed moment in heralding the “New Era” of national rejuvenation under President Xi Jinping. For the first time, China’s top diplomat stated China is being pushed into a “New Cold War.” Knowing China’s penchant for the careful use of semantics, this phrase from the foreign minister implies that Beijing leaders are no longer shy in accepting the G2 formulation of international relations between China and the United States.

His announcement of a New Cold War could not only cast aside Beijing’s earlier “one superpower, four major powers” formulation which has existed since the 1990s, but it could unleash China’s long-awaited “coming of age” moment, and, more importantly, mark its “coming out” of the overstretched Deng Xiaoping’s capitalist road that is often credited for China’s unprecedented economic and diplomatic rise over the last four decades. Grounded in the ancient wisdom of China, Deng had advised the successive generations of Chinese leaders to “hide your strength and bide your time,” which has been under question since his death in 1997.

Since he came into power in 2002, Hu Jintao had deviated from Deng by advocating other elements of the ancient wisdom. Moving forward from his predecessor Jiang Zemin’s propagation of evolving China into a “spiritual civilization,” Hu expanded it for building a “harmonious world” while, at the same time, explaining the “Malacca dilemma” as a trigger for building a blue-water PLA Navy. However, it was President Xi Jinping who was to finally replace China’s post-liberation national narrative of the “Century of Humiliation” with his “China Dream” and “national rejuvenation” projects.

All Roads Lead to Beijing

President Xi’s Belt and Road Initiative (BRI), modeled after the Cosmopolitan China of the Tang Dynasty and the maritime supremacy of the Ming Dynasty, is aimed at developing an “all roads lead to Beijing” scheme. In his famous speech to the 19th Party Congress in October 2018, the president had even identified benchmarks for China’s rise as a “moderately prosperous society” by 2021 and a “great modern socialist country” with Chinese characteristics by 2049.

In the context of Beijing’s so-called early recovery from the coronavirus, China is acting a bit too impatiently as the rest of the world, including the United States and other G7 nations, keep sinking deeper into the morass of this pandemic. Branding China’s diplomats as “Wolf Warriors” in multiple recent spectacles, Beijing’s conduct of foreign policy can best be explained as taking a precipitous leap of faith to its imagined future of a “New Era” as if it has finally arrived.

The Lion and Sheep

The rest of the world has, however, seen China’s leap into its perilous future. Its risky behavior is clearly marked by China’s drift from its quintessential “Chinese characteristics” of privileged participation and persuasion of others, that have been central to Beijing’s code of conduct. By accusing that “a political virus is spreading in the United States . . . to attack and smear China,” Foreign Minister Wang Yi, for instance, advised Washington to abandon its “wishful thinking about changing China or stopping 1.4 billion people’s historic march toward modernization” and to accept that different countries have different social systems and that disagreements must not preclude cooperation.

The foreign minister of China was, of course, bound by his polished style of presentation and used relatively soft language to convey his warning. Comments from some of his team members have been relatively harsh and piercing. Yet Wang Yi’s words must be considered against the backdrop of rising global anger against China. The classic line from the popular series, Game of Thrones, which reads “the lion does not concern himself with the opinions of the sheep” might appropriately describe China’s evolving worldview flowing from its domestic experience of Confucian-like conformity for authority. Due to its relative advantage in the immediate aftermath of the coronavirus world, an increasingly powerful China—like the lion—may be tempted to ignore the global opinion about the plight and predicaments of other people.

China is not taking up the gauntlet of the outdated Soviet-American Cold War template but seems all set to redefine the G2 formulation between Beijing and Washington. Beijing clearly seems to allude that it has begun taking the lead in casting a reset button in international affairs for a New Era in the post-pandemic world.

The Eagle Soars and the Lion Roars

In an apparent response, the Trump White House presented the administration’s China Strategy report to the U.S. Congress on May 20. The White House report, entitled The United States Strategic Approach to the People’s Republic of China, once again acknowledges a certain parity to China by reiterating a policy of “strategic competition.” Thus, it outlines the U.S. plans to “appropriately” protect their core interests.

However, recognizing the specter of once again building a unified, Coordinating Committee for Multilateral Export Controls (CoCom) as well as the North Atlantic Treaty Organisation (NATO) that were constructed against the former Soviet Union in the late 1940s, this China Strategy report of the Trump administration alludes to the repetition of a similar framework beyond its national efforts to further network with its allies and like-minded partners to stop and resist attacks on the shared norms and values that China has been trying to reshape in its favor.

American efforts have begun with the assembly of the WHO on May 18 when the United States and Australia led this call for an investigation into the origin of the coronavirus. It was reciprocated by the European Union, which leads sixty-two member-nations to stand in support of the proposal for investigation, which was adopted by the World Health Assembly. China finally conceded to the investigation, except that Beijing demands this process be carried out from the perspective of a “global response” to the coronavirus and begin only after the pandemic is over.

Meanwhile, President Donald Trump has raised his fist by first halting the U.S. financial contribution to the WHO and then declining to address the global Assembly in Geneva, which was followed by his strange ultimatum to the WHO—giving a thirty-day deadline to show “substantial” reforms. Compared to Trump, Xi chose a conciliatory line in his telecasted opening speech and offered to provide an additional $2 billion as Beijing’s contribution to strengthen its response to the coronavirus pandemic.

Over two centuries ago, Napoleon Bonaparte had reportedly made this prophetic prediction of China: “There lies a sleeping giant. Let him sleep! For when he wakes, he will move the world.” The great French statesman evidently never actually said this; however, the popular cliché has been widely adopted and then attributed to Napoleon to describe the evolving Chinese-American relationship. Nonetheless, Napoleon—as a historic military leader who built a large empire and ruled over much of continental Europe—may have been guided by the Imperial China’s three historic “rise” periods of the Qin-Han (221 BC-220 AD), Sui-Tang (581–907), and Mind-Qing (1368–1912) rulers. But even Napoleon could not have imagined a post-coronavirus China that the rest of the world had to engage and address as the lion—not as the sheep.

History calls for the United States to once again rein in its inherent “isolationist” sentiments and ensure that no nation is able to singlehandedly seize power to transform the extant world order and the universal values and norms that have been cultivated by making sacrifices throughout not one but two World Wars in the twentieth century.

Dr. Patrick Mendis, a former American diplomat and a military professor, is a Taiwan fellow of the Ministry of Foreign Affairs of the Republic of China and a distinguished visiting professor of global affairs at the National Chengchi University as well as a visiting scholar of the Taiwan Center for Security Studies in Taipei.

Dr. Swaran Singh is a professor of diplomacy and disarmament in the School of International Studies at Jawaharlal Nehru University and the chairman of the Centre for International Politics, Organisation, and Disarmament in New Delhi. The views of the authors expressed in this analysis neither represent the official positions of the current or past institutional affiliations nor the respective governments.