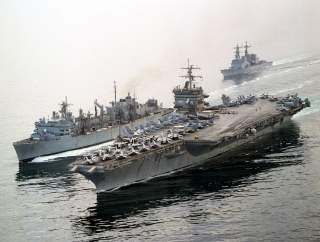 Secretary of State Mike Pompeo openly challenged China’s and Russian’s Arctic intentions at the May 2019 Arctic Council Meeting in Rovaniemi, Finland. This marked a dramatic rhetorical shift in the usual diplomatic line that the United States regarded the Arctic as a venue for cooperation and research and that climate change is the clear and present danger to Arctic security. Climate change unquestionably is altering the Arctic landscape and will have long term effects. However, Pompeo’s statement was a significant expansion of the warning by former Secretary of State Rex Tillerson that the United States is “late to the game” in the Arctic and needs to start making policy, security, and economic investments in the Arctic or be left on the sidelines. Even though Pompeo did not suggest that the Arctic Council should take any particular action(s), it was clear that the Trump administration was not satisfied with what was happening in the far North.

Pompeo issued a blunt rebuke of China’s recent declaration that it is a “near Arctic” state and Russia’s territorial ambitions vis-à-vis its Northern Sea route and its expansion of bases. Evidently, his speech writers had listened to what analysts were saying about the Arctic Council’s passive approach to Arctic governance. They aired concern that the rapid expansion of economic activity in the region threatened that the council would “fall victim to subversion” from influences inside of the Arctic (Russia) and non-Arctic States (China).

None of these recent statements should come as a surprise. Tillerson knew the importance of the Arctic from his time as CEO of ExxonMobil when he cut deals in 2013 with Rosneft, the state-owned Russian oil company, to enable ExxonMobil (and by extension the United States) to have an economic foothold in the Arctic oil and gas economy. Because of sanctions, ExxonMobil abandoned its joint venture with Rosneft in March 2018. U.S. oil and gas companies have more or less abandoned the Arctic oil and gas economy, although there is continued talk of a natural gas pipeline project between an Alaska natural gas consortium and China’s Sinopec. But, because of sanctions and the maturity of the oil, gas, and mining deals that have already been concluded, it will be impossible for the United States to displace Russian, Indian, French and Chinese financed oil, gas, mining, and infrastructure projects in the richest new oil and gas region in the world.

This is a problem on two levels. First, U.S. participation would have been beneficial since it could help influence supply levels and price stabilization since the United States is now a net energy exporter. Further, the influence over world energy prices is beneficial to the U.S. economy. Secondly and perhaps more importantly, U.S. participation would provide an economic lever to press for responsible development standards in all sectors (mining, oil and gas, etc.) since an accident in one part of the Arctic affects all of the coastal states. As things now stand, an oil and gas accident, the sinking of a passing ship carrying noxious cargo, or another type of incident affecting the Arctic marine environment, is a “jump ball” in terms of who will pay for the mess even though accidents will likely affect all coastal countries. If the United States were a more active participant, it is probable that U.S. companies, their shareholders, and regulators would push for a better-defined liability scheme.

The United States and some allied militaries are starting to pay more attention to Russian military activities in the Arctic, including its upgraded military base structure and increased modernization of its forces in the region. NATO is starting to discuss possible security challenges posed by China’s statements that it is a “near Arctic” state. China’s statement in its January 2018 White Paper that Beijing, as a member of the UN Security Council, would have to promote “peace and security” in the Arctic—a curious statement since 85 percent of the Arctic Ocean is completely under the legal jurisdictions of coastal countries. The remaining 15 percent is considered high seas; not under the jurisdiction of any single country.

For its part, DOD sounded warnings in its new Arctic Strategy in which it assessed that the Arctic is a potential corridor for “great power competition” and it pledged to increase its force posture, contest excessive maritime claims, and work with allies and the U.S. Coast Guard to ensure that the rules-based order in the Arctic persists. In addition to the new DOD Policy, U.S. military leaders have embraced the fact that the Arctic has strategic importance and U.S. military exercises involving the Arctic are slowly on the upswing. A few icebreakers (two thus far; now known as “polar security cutters”) are being funded and will deliver in 2023. Also, the U.S. Navy’s reestablishment of the Second Fleet in May 2018 suggests more Navy deployments to the Baltics and possibly the Arctic. The secretary of the navy has even gone so far as to say that the U.S. Navy would be mounting Freedom of Navigation (FON) operations in the Arctic to challenge Russia’s Northern Sea Route (NSR); however, there are good reasons to question whether such a move would make good policy or operational sense since it would seem to this analyst that driving a wedge between Russia and China in the Arctic needs to be the highest policy priority in the administration versus FON operations in the remote NSR.

Analysts are also increasingly leery of the much increased economic and political cooperation between Russia and China in Arctic development because it helps further drive a wedge between the United States and Russia; the two Arctic countries with the largest reserves of oil and gas. The success of the jointly owned Yamal LNG project (which assures China a reliable supply of natural gas) is an example of how increased Chinese investment in Russian oil companies appears to be paying off for both sides (since Russia needs inbound capital and China needs raw materials/energy). This bilateral economic activity is almost certain to continue given that 20 percent of Russia’s GDP is derived from Arctic economic activity and China has ongoing needs for energy and raw materials that can move by sea.

The Arctic is a growing market for bilateral economic activity but worldwide trade is growing rapidly between Russia and China. In June 2019, Presidents Xi Jinping and Vladimir Putin signed deals valued at US $20 billion in various sectors including nuclear power, hi-technology, e-commerce, 5G communications, etc. This came on the heels of a more than 20 percent increase in bilateral trade in 2018 and projections by the Chinese Commerce Ministry assert that bilateral trade will increase to over US $200 billion per year. A large portion of that increase will almost certainly involve Arctic natural resources.

What should be of greatest concern to U.S. and allied navies are recent reports of Russian requests that China help finance and develop Russian ports and infrastructure along its Northern Sea Route. These press reports are fully consistent with China’s unabashed discussion of China’s wishes to “work with all parties to build a “Polar Silk Road” by “encouraging its enterprises” to “participate in infrastructure construction” for polar routes, including (by name) the Northwest Passage (NWP) and NSR. There have also been sporadic reports of China expressing an interest in developing the route and some Canadian academics have been promoting it as a way to jump-start the route’s commercial viability.

The implications of China owning a large “stake” in what will likely become strategic Arctic waterways is concerning since China could use its economic leverage to deny passage to U.S. or allied ships or those ships that threaten its interests. To be clear, this has not happened and China has not declared that this is one of their strategic goals; but, money talks! It is also not that far-fetched for China to use its investments along these routes as the premise for building or financing ports and infrastructure. According to Becker, Downs, et. al., this nationalist investment pattern has followed in South Asia and West Africa with mostly State Owned Chinese Enterprises (SOEs). With those actions (commercial on their face) came the People’s Liberation Army (PLA) Navy, which began using the facilities to support their vessels’ routine deployments and also started threatening those that might interfere with China’s right to make investments and use military force to protect Chinese nationals and their property interests. China’s July 2019 white paper, “China’s National Defense in a New Era,” makes very clear that it will develop bases and overseas logical facilities to address current “deficiencies” in the ability of the PLA to protect its citizens residing overseas and their interests (including commercial enterprises). By contrast, the U.S. National Security Strategy (December 2017) and the National Defense Strategy (2018) are silent on the point of whether U.S. defense investments and military power will be used to protect U.S. citizens abroad or U.S. overseas commercial investments.