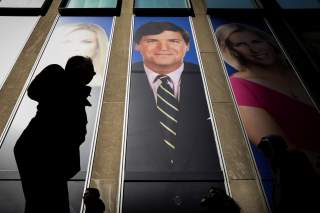 WHEN FOX television host Tucker Carlson recently attacked conservative faith in free market economics, he probably surprised a number of his viewers. For too long, Carlson charged, libertarians and social conservatives have ignored the fundamental part economic structures play in undermining communities. Families are crushed beneath market forces. Disposable goods—fueled by consumer culture—provide little salve for drug addiction and suicide. Markets are a “tool,” Carlson said, not a “religion.” “You’d have to be a fool to worship” them.

Carlson put a primetime spin on an argument that has been brewing for some time on the right. Just as the 2008 economic collapse and the national prominence of Bernie Sanders have begun to shift the Democratic Party’s stance toward socialism, so the long effects of the downturn and Trump’s election have caused a rethinking of conservative commitment to free markets. Time magazine profiled policy entrepreneurs attempting to give heft to a post-market-fundamentalist gop. The Niskanen Center, a redoubt of the #NeverTrump movement, has backed away from libertarianism in favor of “moderation.” And the journal American Affairs is proving a fascinating avenue of contrarian right—and left—thought.

The nominees for the Intercollegiate Studies Institute’s “Conservative Book of the Year” provide another index of this growing uncertainty about markets. The shortlist of five contained two books by political theorists. The first, Patrick Deneen’s Why Liberalism Failed, argues that the American left and right are both committed to an atomistic liberalism that, through the logic of individual choice and rights, has worked in tandem to uproot communities and enlarge the state. The winner, Yoram Hazony’s The Virtue of Nationalism, is a qualified and semantically-precise defense of nationalism as the best, realistic basis for a global order. Even Suicide of the West by Jonah Goldberg, another award finalist that many saw as opposed to Deneen and Hazony, expressed a greater level of uncertainty about the side effects of free markets than might have been expected from a stalwart contributor to National Review five years ago. Then there is the popularity in some conservative circles of the heterodox socialist historian Christopher Lasch. Lasch’s later career combined criticism of elites, feminism and the concept of progress with a sustained attack on their capitalist foundations. Like Carlson, Lasch connected drug addiction with the consumerist nature of modern economies.

The irony that self-described conservatives are belatedly discovering the disruptive power of free markets is not lost on critics of American conservatism. It is a widely noted paradox that many conservatives have committed themselves to one of the most transformative forces in human history. The earliest self-conscious proponents of conservatism in America were not in fact as committed to free market orthodoxy as their successors. Conservative intellectuals in the 1950s and 1960s, including some associated with key movement organs like National Review, were ambivalent about a conservatism based upon capitalism and advanced arguments that anticipated current debates. These market-skeptical conservatives lost a series of political and philosophical battles that led to the absurdity of conserving the process of creative destruction. Now their old arguments are appearing in new garb.

ONCE UPON a time, American politicians desperately evaded the designation “conservative.” The preferred label was liberal. In 1948, New York Times Magazine found that major leaders across the political spectrum—from Republican stalwart Robert Taft through Thomas Dewey, Harry S. Truman and Henry Wallace—called themselves liberals. The Republican Party was conservative, former president Herbert Hoover said, “in the sense of conserving true liberalism.” At most, Taft would call himself a “liberal conservative.” It was widely accepted that the United States was a liberal nation committed to liberal values, the very argument advanced by Louis Hartz in The Liberal Tradition in America. But in the early 1950s there was a vogue in “fashionable circles” to, as Arthur Schlesinger Jr. put it, “dismiss liberalism as naive, ritualistic, sentimental, shallow.” The brief popularity of “conservatism” among certain political thinkers helped to transform American political language.

Three decades of shocks—the Depression, two World Wars, the Holocaust, atomic and hydrogen weapons, fascism, mass politics, secularism, the Cold War—blasted away Victorian pieties. While many intellectuals embraced existentialism or the believing skepticism of the “end of ideology,” a number of Anglophile thinkers contended that what society needed was a healthy dose of tradition, hierarchy, transcendence and orthodox or neo-orthodox religion. Peter Viereck, the poet and historian who first championed what became called “New Conservatism,” began his 1949 conservative treatise by asking “what are the values we can live by in the postwar crisis?” His answer was a “revolt against revolt” and a humane conservatism of the “moral, aesthetic, and intellectual values” that make life worth living. Viereck’s Conservatism Revisited inaugurated numerous books and articles in favor of an American conservatism modeled on the British Conservative Party, or what might be called Toryism with a human face.

In politics, most of this loose group of writers and academics were largely middle-of-the-road Republicans or Democrats, especially admiring of Adlai Stevenson’s learning and bearing. In economics, too, they were moderates. They favored markets and private ownership but defended trade unions and the New Deal as institutions that preserved social cohesion and sustained capitalism through crisis. In Viereck’s breakthrough essay, “But – I’m a Conservative,” he professed agnosticism on the best economic system for a society. What mattered was that it was chosen legitimately and “baptized” in tradition. In a later essay, he indicated a preference for “mixed economy Keynesianism.” Another New Conservative, John Hallowell, a political science professor at Duke, believed in “the necessity for a controlled economy” and the value of “many features of the so-called welfare state.” August Heckscher, opinion editor of the moderate Republican New York Herald-Tribune, criticized the American right’s pejorative use of “welfare-state.” Not only is welfare “a supreme end of the government,” Heckscher wrote in Confluence, a journal edited by a young Henry Kissinger at Harvard, it is constitutional and “basic to every sound conservatism.”

These conservatives cherished social stability against disruption and dehumanization. They drew on the insights of Edmund Burke—then undergoing an academic and cultural reappraisal—and the concept of original sin as reasserted by the prominent theologian Reinhold Niebuhr. Although they preferred markets over state ownership, the New Conservatives recognized the power of capitalism to upend society. In The Quest for Community, Robert Nisbet, a sociologist associated with New Conservatism, hoped for a new laissez-faire that took communities into account. The free market was an unnatural economic order, Nisbet argued. It had been brought into existence “by the planned destruction of old customs, associations, villages, and other securities” and yet only functioned because of those same mediating institutions. Raymond English, a professor at Kenyon College, claimed that the basic assumption of “economic conservatism” was fundamentally the same as Marxism: that humans are economic beings, motivated by selfish materialism in a lifelong struggle. In English’s view, Marxists and libertarians both wrongly believed that political interference in economics could never “be for the general welfare,” only privileged classes. “Social reform is not the same as egalitarianism,” Viereck complained. “And why is any merely material and economic system more sacred than the moral duty of compassion for want?”

The New Conservative project faced major difficulties. Not least of all because, despite Republican disavowal of the term “conservative,” in the American context “conservatism” popularly meant old guard Republican opponents of the New Deal and support for “the American enterprise system.” Viereck had intended the “New” Conservatism to mean “non-Republican, non-commercialist, non-conformist.” As early as the 1950s, though, he was regretting the term “conservative” because of its association with anti-New Deal Republicans. Viereck insisted that “any non-moronic conservative must favor” the New Deal because it had done more than anything to “prevent class-radicalism & communism.” Further complicating Viereck’s hope was the fact that the man who became most associated with “conservatism” in the mid-1950s was a Bob Taft Republican from Michigan.

RUSSELL KIRK, author of The Conservative Mind, a winding history of Anglo-American ideas and personalities, did as much as anyone to legitimize the concept of conservatism in America. The eccentric professor turned down Alfred Knopf’s demands for major cuts to his manuscript to publish with a small, right-wing publishing house in Chicago, best known for William F. Buckley’s God and Man at Yale. Kirk’s tome spoke to the conservative moment of the early 1950s and, spurred by strong and prominent reviews in major publications, became a shock best-seller. Like Viereck and the other New Conservatives, Kirk celebrated tradition, order and transcendent principles. Unlike virtually all the other writers associated with the New Conservatism, his personal politics were down-the-line old guard Republican. The book’s success decisively established the basic language of American conservatism and Kirk’s politics, and indefatigable networking encouraged right-wing Republicans to embrace the term conservative. “We are beginning to succeed,” Kirk wrote to his publisher Henry Regnery, “when we make such people come over and use our terms.”

Deeply romantic, Kirk celebrated traditional societies and the conservative leaders and thinkers he believed ensured their posterity. He detested “ideologues.” Although he called himself “the most orthodox of thinkers on pure economic theory” and enshrined reverence for private property as a basic conservative canon, he was critical of libertarians and “doctrinaire apologists for free enterprise.” In The Conservative Mind, Kirk tweaked the Austrian economist Ludwig von Mises’ claim that “capitalism gave the world what it needed.” It led to a high standard of living, Kirk agreed, but “turned the world inside out,” reducing “personal loyalties” to “financial relationships.” Capitalism produced the bugbear of the New Conservatives—“mass man”—while industrialism “was a harder knock to conservatism than the books of the French equalitarians.” The New Conservatives recognized that the embrace of capitalism and industrialism was especially strong in the United States. One sympathetic observer, Cornell professor Clinton Rossiter, wrote that the “rugged individualism” embraced by the Republican right was “an explosive charge” on society. Rossiter compared the American right with English conservatism. Americans were more optimistic, materialistic and individualistic, he concluded. To build a political movement of imaginative conservatism, as Rossiter, Viereck and Kirk hoped for, or a new laissez-faire, as Nisbet proposed, ran against powerful structural forces and the American psyche.