Will Conservatives Rally Behind Trump? 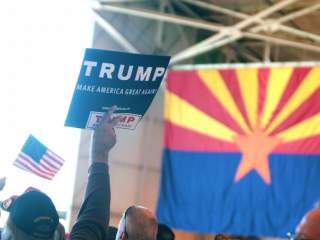 It was an odd feeling watching the conservative despair that greeted Ted Cruz’s decision to end his presidential campaign after yet another landslide loss to Donald Trump.

While some of my comrades were despondent to see a constitutional conservative’s White House bid come to a close, the real source of displeasure was Trump as the near-certain Republican nominee.

Why so strange? I’ve been a conservative all my adult life and a partisan Republican since childhood. I voted to reelect Ronald Reagan in our elementary school’s straw poll in suburban Massachusetts (he won and actually carried the Bay State in November).

That legally meaningless gesture was the only time I happily voted for a Republican presidential candidate. I don’t regret my first real presidential vote for Bob Dole, though I knew he wouldn’t win (the fact that he didn’t gave me even fewer reasons to regret it). But George W. Bush was a doozy.

In 2000, I had planned to support Pat Buchanan’s lonely Reform Party presidential bid all year long. But the Bush-Gore race was so close and the third-party business was such a circus. The Texas governor said all—well, some—of the right things about exit strategies, the futility of nation-building and above all a “humble foreign policy.”

So George W. Bush it was. Less than four years later, we were at war with Iraq. The Iraq war tested my loyalty to the Republican Party and even the conservative movement like nothing had before. By about 2006, when the war was clearly a fiasco but pointing this out to many Republicans was like calling for the enacting of Bernie Sanders’ full economic program, I felt my party had gone mad.

John McCain was valiant as a prisoner of war in Vietnam and quite decent in our one extended personal interaction (I helped chauffeur him around when he visited my college campus in the late 1990s). But I found him singing about bombing Iran and proposing a foreign policy that suggested he wasn’t entirely kidding utterly horrifying. He also cared even less about constitutionally limited government at home than George W. Bush, whose compassionate conservatism blew a hole in the federal budget.

Sarah Palin seemed like the sane one on the ticket. If I raised any of these concerns, I was told I was effectively voting for Hillary Clinton and then Barack Obama. “But I’m not going to vote for the Democrats,” I would say. “I’ll support a conservative third-party candidate.” I voted for Bob Barr, a Republican congressman who pushed for Bill Clinton’s impeachment turned Libertarian.
Needless to say, conservatives weren’t quite as understanding of these arguments then as they are now in the age of #NeverTrump. And they are contemplating third-party votes that will have a much bigger impact on the November results than my futile protest ballots.

I agonized over voting for Mitt Romney, who I had supported against Ted Kennedy and for governor in my home state, like a radio talk show host whose audience was made up 50 percent of Hillary haters and 50 percent Trump haters (a real dilemma many of them are going to face, by the way).

This year, I was actually closer to the Republican mainstream on these things. I wasn’t planning on voting for Trump. Though he may seem like a latter-day Buchananite now, I remember all the mean things he said about Buchanan in that fateful 2000 contest, when he was Jesse Ventura’s handpicked candidate to block him from the Reform Party nomination. I don’t fully trust him even when he says things about the Iraq war that are good deal more sensible than anything I’ve heard the last three Republican nominees say.

While I am not totally convinced Trump will be every bit as bad as some anti-Trump conservatives say, the combination of his narcissistic personality and statist impulses does seem like a bit much to risk. I was, however, planning on holding my nose and voting for Cruz if he made it to the general.

Therefore, I know what is like to believe, as John F. Kennedy once said, that party loyalty sometimes asks too much. I can identify with the radical sense of alienation so many conservatives feel from their party and its base.

Sometimes, I feel a bit guilty to say that I like having some company in all these things for once. I thought Gary Johnson’s 1 million votes in 2012 was going to be the most sort-of kindred spirits I’d ever find. And Johnson isn’t really pro-life.

Before the Ohio primary, I called a friend of mine who was active in Republican politics to get a sense of where he thought things stood. He became engaged with Reagan’s election in 1980. He calmly recalled how his parents’ generation hung up pictures of Franklin D. Roosevelt and were a bit perplexed by the event that led to the collapse of the New Deal coalition and the rise of the Nixon-Reagan coalition.

My friend good-naturedly suggested that perhaps we were living through such a time of transition. If so, he said, Reagan conservatism has had a pretty good run.

I’m not sure I’d go that far yet. But when I see so many people complaining we have a Republican nominee who isn’t very conservative, will be reckless in international affairs and is more likely to lose to the Democrats than keep his promises if somehow elected, I can’t help but think: what else is new?