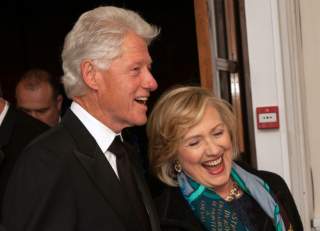 Hillary Clinton made history in two ways this week. The most obvious is that she is the first woman to be nominated for president by a major party, putting her one step closer to shattering that ultimate glass ceiling.

Perhaps even more significantly, however, Clinton is a transitional figure between her husband’s New Democrat politics and a more-left Democratic future symbolized by Bernie Sanders.

A seventy-four-year-old socialist is not often the future. But the idea that Democrats no longer have to triangulate to win elections, that they don’t have to trim their sails as much as they did in the 1990s, seems validated by recent events.

In the Democratic primaries, Sanders was limited only by his coalition’s relative lack of racial diversity. Had he done better with black and Hispanic voters—and in some states he did reasonably well among younger Democrats in both groups—he might have toppled Clinton. Some future Democrat won’t have the same problem.

For now, Clintonism and the new more progressive Democratic politics coexist more or less peacefully, if uneasily. On the same day that most fervent Sanders delegates staged a walkout to protest Hillary Clinton’s nomination, Bill Clinton charmed the convention into submission with a well-received speech that wasn’t interrupted by hecklers.

It was striking that the two big events of Day Two of the Democratic convention was Sanders supporters angry even at their own candidate for acquiescing to Hillary (he moved for her to be nominated by acclamation after losing an anticlimactic roll call vote as expected) during the day, storming the media tents, and Bill Clinton stealing the show in primetime with an effective, not especially self-aggrandizing speech.

Before Bill Clinton spoke, Democrats played a video praising his economic record, including the creation of twenty-three million new jobs. But Democratic fiscal policy circa 2016 is a far cry from deficit-cutting Rubinomics.

The truth is, Sanders was running against Bill Clinton’s Democratic Leadership Council politics more than anything else: partial Glass-Steagall repeal, NAFTA and other free trade agreements, capital gains tax cuts, a crime bill that arguably contributed to mass incarceration of African Americans, symbolic concessions to social conservatives despite being socially liberal overall, a U.S. foreign policy in which preventive war plays a significant role.

Even Iraq and Libya, the Clinton offenses that are most clearly Hillary, are a product of DLC/neoliberal thinking that post-Bill Democrats are less inclined to find persuasive.

Hillary Clinton has transformed herself on most, if not all, of the issues that drive progressives mad about Bill (foreign policy remains the biggest exception). She has embraced Black Lives Matter and criminal-justice reform, spun a decade and a half of support for the Defense of Marriage Act her husband signed into unstinting gay-marriage advocacy, talked about jailing Wall Street executives and morphed abortion from something that should be shrouded in euphemism except when discussing how it should be rare into a more full-throated defense of the practice.

None of this would have been considered smart politics in the 1990s, when Bill Clinton was reacting to the Democratic image problems that helped them lose to Ronald Reagan and George Bush during the previous decade. They all are at least defensible political moves now.

Barack Obama memorably said he didn’t seek the White House to push school uniforms, a not-too-subtle jab at Bill Clinton’s small-ball politics. Pre-Hillary, Obama has been the glue that has held the progressive left and the more centrist Democrats together. That’s why his speech to the Democratic convention tonight is so important.

If you are an upset Sanders delegate, you can shout “We trusted you!” at Elizabeth Warren. You can even chant “Lock her up!” about Hillary. But can you really disrupt Obama?

Obama is trusted by both sides of the Democratic divide in a way that Clinton just isn’t yet, although the vast majority of liberals who don’t like her are at least willing to live with her, convention dissension notwithstanding.

The president was the first step in a transition that Hillary is going to have to continue if she is elected. She certainly has the shamelessness to give it a try. The only question is whether she has the basic believability to pull it off.