Will the Democrats Run on an Impeachment Platform? 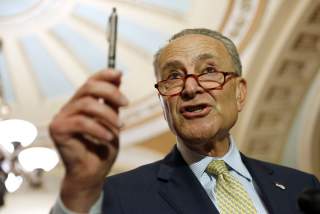 In the United States, the Democratic Party may seem like a unifying bunch on the surface, but like their Republican colleagues, Democrats frequently disagree amongst themselves about a whole host of public policy issues.

Is free tuition in public schools a plausible idea? Should the party open its doors to more independents and unaffiliated voters? Will an open door policy chip away at the progressive vision so many of the rank-and-file now support? Should Democrats cooperate with President Donald Trump on problems that have cross-party appeal like domestic infrastructure and bureaucratic reform? Or, in the spirit of Bernie Sanders, Elizabeth Warren, and the deep blue progressive state of California, should the Democratic Party become the Resistance Party, objecting to everything and anything the White House proposes?

With the midterm elections only five months away, Democrats around the country can add another question to the agenda: is calling for the impeachment of Donald Trump a winning campaign theme?

Tom Steyer is a liberal hedge-fund manager from San Francisco whose name occasionally pops up in conversations about possible Democratic presidential contenders in 2020. He believes a Trump impeachment is not only a political hammer against Republicans but a moral calling for the country. The billionaire has spent $40 million on advertisements pushing for Americans to sign on to his “impeach Trump” petition—a petition that has received about 5.4 million signatures. “The Founders gave us impeachment to answer a reckless, lawless and dangerous president,” Steyer told Politico last month, “and every day that his behavior is accepted, every day that you don’t oppose it, it becomes enshrined as the way things are done.” In Steyer’s eyes, if you’re a Democrat who opposes Trump’s agenda but refuses to get with the program, then you are nothing but enabler a Trump who routinely disrespects the presidency, defiles the U.S. Constitution, and who possesses authoritarian tendencies.

There is nothing that members of "the Resistance" would love more than for a Democratic-majority House of Representatives to refer articles of impeachment against President Trump to a Democratic-majority Senate, which in turn would throw him out of office (the fact that no president in U.S. history has ever been removed from his job hasn't dulled the fantasies). For that implausible dream to be even remotely possible, however, Democrats would need to win an extremely lopsided victory of epic proportions in November. And for politicians who have been a fixture of Democratic Party politics for decades—Nancy Pelosi, Chuck Schumer, Steny Hoyer, and the like—you aren't going to get those congressional majorities if impeachment is the issue the party chooses to run on.

When Pelosi says that "I do not think impeachment is a policy agenda," or that impeachment is "divisive,” she has a valid point. While 42% of Americans in a recent CNN poll supported impeaching President Trump, the numbers are heavily lopsided. Depending on which side of the political spectrum you are on, impeachment is either a mechanism to save American democracy from a tyrannical Trump (71% of Democrats favor the tactic) or a phony, deliberate, and unsubstantiated constitutional coup (87% Republicans disapprove of it).

A Trump impeachment, if it were ever to come about, would tear the country apart. If the 1998-1999 Bill Clinton impeachment saga was tiresome and ugly, a similar episode starring Donald Trump would be a hyper-partisan media circus that would only entrench the tribalist nature U.S. politics has taken over the past several years. Indeed, the result of impeachment could very well be an Americans electorate even more disgusted by the American political establishment than when the process began.

After all, the GOP tried the Tom Steyer approach during the 1998 midterm elections. Speaker Newt Gingrich and his lieutenants were confident that they could hammer Clinton’s infidelities, moral lapses, and poor judgment into a greater congressional majority on Capitol Hill. Clinton at this particular time was in the fight of his life, with a tormentor of a special prosecutor in search for blood and a Republican Congress that saw taking Clinton down as the sole legislative objective. But, what Gingrich and the Republics got instead was one of the worst political embarrassments in an American midterm election—a result so underwhelming that the House GOP conference was agitating for Gingrich to go. And go he did. Only days after the election, Gingrich resigned the speakership.

There is a lesson here for today's Democratic Party, one that veterans like Schumer and Pelosi see even if the anti-Trump grassroots on the left cannot. And the lesson is this: absent clear and overwhelming evidence from Special Counsel Robert Mueller's investigators that Trump committed a high crime and misdemeanor that is so severe and so obvious that even the president's party can't spin it, using impeachment as a plank of the campaign simply doesn't pay enough electoral dividends. It may excite base Democratic voters and draw tens of millions of dollars into campaign committee's coffers, but in a year where the Democratic base is already roaring and ready to vote, more red meat may not be needed.

The Democrats have a good shot at reclaiming the House this November after eight years in the minority. If the party’s red-state incumbents can manage to keep all their Senate seats and if it can flip Nevada and Tennessee, Democrats could also retake the upper chamber. But it’s delusional to think that making Trump’s overthrow a major issue will be the magic formula that brings the Democratic Party newfound power on Capitol Hill. Nancy Pelosi can often appear out-of-touch, but on the question of Trump, impeachment, and midterm politics, she couldn’t be more right.

Daniel R. DePetris is a contributor to multiple publications, including CNN, The Diplomat, The American Conservative, and many others.