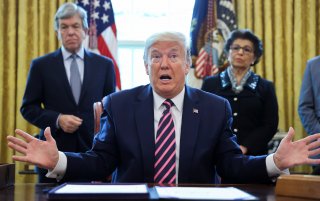 The presidential election comes on the dawn of a new decade after a tumultuous period that included a pandemic, a president redefining the image of the office, making controversial diplomatic overtures, and sometimes accused by opponents of being an aspiring tyrant.

The opposition party thinks the best chance for retaking the White House is to appeal to the country for a simpler time, a calmer era, before the chaos and drama wrought on the country by the current administration.

After a stretch of shaking things up, the party out of power was making a bet that America wanted no more shaking, just a steady, maybe even a little boring, placeholder to keep the ship of state between the lines. That status quo of yesteryear was starting to look pretty good about now, would be the argument.

It’s what became famously known as a “return to normalcy” campaign.

It should also be noted there are marked differences. The party out of power one hundred years ago was the Republicans. An incumbent president wasn’t running for re-election. Everyone should be thankful the coronavirus pandemic is not as deadly as the Spanish flu of 1918. While there have been some international flare-ups, the country most assuredly isn’t emerging from a World War.

Still, just as President Woodrow Wilson tried and failed spectacularly to enter into the controversial League of Nations, President Donald Trump wasn’t successful in securing a nuclear deal with North Korea. Wilson won a war. Trump kept the unfulfilled promise of numerous predecessors in locating the U.S. embassy to Israel in Jerusalem and renegotiated NAFTA.

With regard to one aforementioned accusation then and now, it should be said that Wilson demonstrated more substantive authoritarian designs than Trump has ever shown.

American University professor Allan Lichtman, who has correctly predicted the last nine presidential elections, has contended that every presidential election is about the party in power. That would have been the case in 1920. While Wilson was not on the ballot, his policies were.

Democrats nominated Ohio Gov. James Cox for president and Wilson’s assistant secretary of the Navy Franklin Roosevelt, a young politician on the move, for vice president. The progressive ticket ran in part on completing Wilson’s dream of the United States joining the League of Nations.

Republicans nominated Ohio Sen. Warren Harding, a bit of a moral reprobate unbeknownst to Republicans and most other voters at the time. The GOP nominated his near opposite in Massachusetts Gov. Calvin Coolidge for vice president. Harding and Coolidge ran on what at the time were conservative policies of higher protective tariffs and more restrictions on immigration.

As for the handwringers today who say it’s never been this bad: If World War I and the Spanish flu weren’t enough in the years leading up to 1920, then America was enduring a string of bombings from anarchist far worse than the domestic terrorist of today such as Antifa or the white nationalists that showed up in Charlottesville. While fears of a rising global role of Russia and China persist today, in Wilson’s final term the communist takeover of a world power like Russia fueled concern over the communist threat in the United States. Some things are beyond the control of the administration in power. But politics isn’t always fair.

The 2020 Democrat nominee Joe Biden, the seventy-seven-year-old former vice president, is no Warren Harding, who was fifty-five when nominated.

But, just as Biden won his party’s nomination after slogging through a crowded field and losing the initial primaries, Harding didn’t get the Republican nod until the tenth ballot at the Republican National Convention in Chicago. One Republican senator at the time, Frank Brandegee of Connecticut, commented on the field of GOP aspirants, “Harding is the best of the second-raters.”

That’s still more unity than the Democratic National Convention in San Francisco had, taking forty-four ballots before deciding on Cox.

Harding ran on “return to normalcy.” He was chided at the time about whether he should have said, “normality.” But, that’s beside the point.

In 2020 Biden’s argument seems to have always been some variation of a return to normalcy. He began his campaign in spring 2019 saying Trump’s presidency was “an aberrant moment in time,” adding, “We have to remember who we are.” For all the talk of resistance and “wokeness,” a normalcy strategy is why Democrats were unwilling to nominate a socialist revolutionary or an untested small-town mayor for president this year.

It wasn’t always clear if Harding had a finite definition for “normalcy.”

“By ‘normalcy’ I do not mean the old order, but a regular, steady order of things,” Harding explained. “I mean normal procedure, the natural way, without excess. I don’t believe the old order can or should come back, but we must have normal order, or, as I have said, ‘normalcy.’”

Ultimately, “a return to normalcy” was about as well defined as “hope and change” or “make America great again,” or any number of feel-good slogans—a blank slate for which voters could draw their own positive conclusion.

Another thing the current coronavirus pandemic brings back is the “front porch campaign,” of sorts. Biden is conducting his campaign from his home through virtual town halls and virtual fundraisers. Trump hasn’t done any of his trademark rallies since the lockdowns began. It remains to be seen whether the traditional rallies will return at all this year.

Harding essentially conducted his entire campaign from his Marion, Ohio home, and the public came to him—a throwback to William McKinley. That was in contrast to Cox who did four hundred campaign speeches across the country.

At any rate, “normalcy” carried the day in 1920. Harding won sixteen million votes to Cox’s 9 million, and delivered an Electoral College shellacking of 404 to 127 votes, winning thirty-seven of forty-eight states. Cox only managed to win the solid South.

The chance of a landslide for either party in today’s political environment is nearly impossible. So, the outcome one hundred years ago is likely no predictor. Also, as noted, many dynamics are very different then and now. Things were definitely worse in the four years leading to 1920 than leading to 2020. But, now one knows how much sway the coronavirus will have by November, whether the economy will have recovered, or what other factors might emerge regarding either Trump or Biden.

Such events are enough to make one long for 1820, when things were moving so well for the young country during the “Era of Good Feelings” that James Monroe ran unopposed for president.