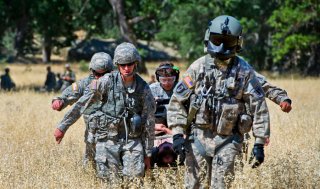 The 9/11 terrorist attacks kicked off the United States’ Middle Eastern wars and diverted its attention from China’s burgeoning restlessness. But events of the past decade—Xi Jinping’s ascension and Vladimir Putin’s annexation of Crimea—reanimated the great power narrative. With the recent withdrawal from Afghanistan and Russia’s second military buildup on Ukraine’s border this year, America and its allies are recalibrating their focus. But as the Western mindset transitions, strategists must not overlook useful developments of the Middle Eastern wars that can be harnessed for the next era of warfighting. These developments include America’s most agile medical units known as Austere Resuscitation and Surgical Care (ARSC) teams.

After experimenting with Forward Surgical Teams (FST) in the early nineties, the U.S. Army fielded its first official twenty-person FST in 1997; these teams have since been deploying on combat operations to provide forward-staged, life-saving surgery. But as larger Middle Eastern operations gave way to pinpoint special operations in rural locations, these twenty-person teams became superfluous—a demand for smaller, more mobile, and even farther forward surgical teams materialized.

Around the same time, in 2009, the Department of Defense (DoD) implemented a “golden hour” policy that mandated battlefield casualties be transported to a medical treatment facility within an hour of injury. The mandate compounded the demand for small, mobile surgical teams to support smaller military operations. The mandate also provided medical researchers with the opportunity to analyze the importance of “golden hour” treatment.

The DoD identified and collected data on battlefield deaths from Iraq and Afghanistan between 2001 and 2014. A study of 4,596 of these deaths revealed that 88 percent occurred before casualties arrived at medical treatment facilities. Of those deaths, almost 25 percent—nearly 1,000—were described as potentially survivable, and almost 91 percent of potentially survivable deaths were due to hemorrhage.

Noncompressible torso hemorrhage (NCTH), which effectively means a tourniquet can’t be used, accounted for most of the lethal hemorrhages (67.3 percent), making NCTH the primary cause of preventable battlefield death. But these deaths can be significantly reduced if surgery is available within the “golden hour.” ARSC teams developed to meet demands.

What ARSC Teams Are

ARSC is an umbrella term—these teams are not standardized, but a 2018 DoD subcommittee defined ARSC as “advanced medical capability delivered by small teams with limited resources, often beyond traditional timelines of care, and bridging gaps in roles of care to enable forward military operations and mitigate risk to the force.” Effectively, ARSC teams stabilize patients who might not survive evacuation to the next level of care via damage control resuscitation and surgery with limited resources, time, and personnel.

“These teams range in size from four to 10 personnel depending on the Service and their specific mission,” DoD spokesperson Maj. Charlie Dietz told me. “However, all of them have at least a single surgeon and anesthesia provider along with varying combinations of nurses, medics, and emergency physicians.” Eleven configurations of ARSC teams across the U.S. military branches have been deployed.

Because these teams are small, and they forward deploy to constrained and unconventional medical settings only minutes from combat injury, ARSC team members must excel clinically—treating combat trauma isn’t easy in a hospital let alone the back of a truck. But ARSC team members must also excel tactically to defend themselves and their patients. They must be proficient in all types of emergency general surgery as well as weapons and communications systems; tactical movements; and survival, evasion, resistance, and escape.

ARSC teams are new, and clinical data are not yet available, but case reports show promising results. For example, data from 190 casualties in a study of after-action reports concluded that ARSC teams provide “a unique [damage control surgery] capability that can be successfully used in a variety of flexible roles.”

But improvements can be made. Terminology is just now being standardized, and recommendations for selection and training standardization are just now being fielded. While ARSC teams must be both clinically and tactically proficient, many are not, making them liabilities rather than assets.

The Future of ARSC

As the Middle Eastern wars wound down, the U.S. military used special operations in lieu of larger conventional forces. The demand for larger medical teams dissipated, and ARSC teams developed to fill the gap. But because these teams developed ad hoc, they only act as a stopgap between the ground medic and nearest hospital. There has been little effort to incorporate these agile teams into big-picture military planning as the United States refocuses on great power competition.

Rather than operating alone as they often did in the Global War on Terror, special operations are reintegrating into a wider mission, but reintegration doesn’t mean disappearance. Great power competition isn’t synonymous with large-scale combat operations—although they are a dangerous contingency. The military aspects of competition with China and Russia may come in many forms ranging from large-scale combat to gray-zone warfare. Even as the U.S. military prepares for a large-scale contingency, it must also maintain its day-to-day operations of irregular warfare, including its ARSC capacity.

Gen. Richard Clarke, the commander of U.S. Special Operations Command, intentionally calls the U.S. emphasis on China and Russia a rebalancing, not a “shift” or “pivot” because counterterrorism missions aren’t disappearing. A 2020 report published by the American Enterprise Institute explains, “Retaining competency in counterterrorism is itself a crucial contribution to great-power competition, because suppressing non-state threats is a prerequisite to allowing the rest of the American government to focus on other things.”

But the Middle East itself may even be an important theater for great power competition—44 percent of China’s oil comes from the region. China is also Africa’s primary trading partner, and special operations supported by ARSC teams will continue to play a central role in that vast, austere environment.

Even in large-scale combat, ARSC teams can provide care to special operators as they recalibrate to impose costs on Chinese and Russian actions, respond to crises, acquire information, and perform strategic raids. But beyond special operations support, ARSC teams might even take on other roles like providing point-of-injury care to casualties that can’t be reached by traditional medical evacuation because of China’s missile capabilities, air defenses, and air power.

“Large scale casualty events, lack of air superiority, and delayed evacuation can create challenges,” Dietz says. “However, human physiology will continue to drive the need for surgical bleeding control for those patients who have non-compressible hemorrhage. As such, small, forward-positioned surgical teams will remain essential to military operations.”

As the United States looks to Asia, ARSC teams should be a planned option within the U.S. military’s spectrum of medical capabilities that are utilized when the mission requires their agility rather than as an ad hoc stopgap.

Jenna Biter is an editorial intern at The National Interest and an M.S. candidate in National Security at Liberty University interested in national security and Russian Area Studies.