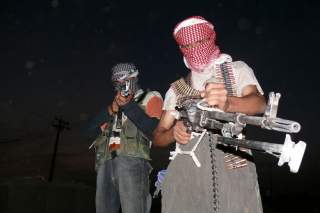 As militants loyal to Islamic State (IS) claim responsibility for increasing numbers of attacks across the Middle East and North Africa, including a recent massacre of European tourists on a Tunisian beach, questions are arising as to just how far-reaching IS’s reach is across the world.

There is good reason to be concerned about the global spread of IS. For example, there are indications that South Asia may be the group’s latest front. Fighters loyal to IS have deepened instability in Afghanistan, especially in Nangarhar province where Taliban fighters have been pushed out. These pro-IS fighters may grow in number in light of the recently announced death of the Taliban’s Mullah Omar, which will likely lead some Taliban members to leave the organization and shift their allegiances to IS.

In fact, terrorist factions in several South Asian nations have already pledged allegiance to the Islamic State. A number of these groups—which include renegade factions of the Pakistani Taliban (TTP), Tehreek-e-Khilafat, and Islamic Movement of Uzbekistan—are based in Pakistan; two groups—the Heroes of Islam Brigade in Khorasan and the al-Tawheed Brigade in Khorasan—are in Afghanistan; and one—Ansar al-Tawhid—is based in India.

IS’s plans to deepen its global presence were made quite clear a year ago when pro-IS groups released a map detailing a five-year expansion plan. The graphic depicts the many countries that the group hopes to bring under its control as part of its self-proclaimed “caliphate.” And yet a close inspection of this map yields a striking discovery: One Muslim-majority nation that would seem to be an obvious IS target is not emblazoned with the group’s trademark black flag.

Bangladesh has apparently been spared.

This is surprising for several reasons. First, many European nationals of Bangladeshi origin have supplied IS with mercenaries. Additionally, the country is volatile, with constant political feuds and some radicalized elements of society. This makes the country quite vulnerable, particularly against the backdrop of IS’s increasing influence in nearby Afghanistan and Pakistan.

So why has Bangladesh avoided IS’s crosshairs?

Part of the answer can be gleaned from comments made by a former U.S. ambassador to Bangladesh, Dan Mozena. He has remarked: “A moderate, tolerant, democratic country, Bangladesh, the world’s seventh most populous country and third largest Muslim majority country, is a viable alternative to violent extremism in a troubled region of the world.”

Indeed, the majority of Bangladesh’s large Muslim population rejects violence, and the nation is more concerned with achieving economic prosperity amid numerous challenges. These range from a general disregard for the rule of law, rampant corruption, and a judicial system that suffers from political interference. These all provide a weak foundation for economic modernization. The lack of a national consensus on future policy has diminished momentum for economic reforms, and deteriorating prospects for near-term improvements in economic freedom make it unlikely that the relatively high growth rates of recent years can be maintained. And yet Bangladesh has somehow made great progress. Indeed, Bangladesh is a rare example of a Muslim-majority democracy with a growing economy.

While Ambassador Mozena has rightfully described Bangladesh as a moderate and tolerant country, there have admittedly been instances of extremist violence. The Jamaatul Mujahidin Bangladesh (JMB), which translates to “Party of the Mujahideen,” is a militant organization in Bangladesh that originated in 1998. The group gained international notoriety when it coordinated an audacious, country-wide bombing campaign on August 17, 2005.

On that day, the JMB detonated an astounding 459 time bombs in 63 of Bangladesh’s 64 districts, injuring over 100 people and killing 2. The JMB’s leaders at the time of the bombing were Siddique ul-Islam, also known as “Bangla Bhai” (Bengali Brother), and Shaykh Abdur Rahman. Fortunately, both were captured in March 2006. Justice was doled out in unusually swift fashion, and both were executed on March 30, 2007.

Ever since their execution, no major terrorist incident has rocked Bangladesh on the scale of the August 17, 2005 attack. Bangladesh’s current government has ushered in a process of de-radicalization, with Dhaka ramping up efforts to rein in Islamist extremists. Dhaka’s modus operandi in de-radicalization has been increased law enforcement actions such as neutralizing small training camps of budding terrorists and arresting foreign terrorists attempting to enter Bangladesh. In addition, the JMB’s top brass has also been arrested, effectively defanging the organization and hindering its ability to continue with militant activities. Also, the United States and Bangladesh signed a Counterterrorism Cooperation Initiative on October 22, 2013. This enabled U.S. expertise to help Bangladesh achieve greater compliance with international counterterrorism standards.

Islamic fundamentalism in Bangladesh does not only manifest as militant violence, but also as a political force in the form of the Jamaat-e-Islami (JeI). This party has historically played important roles in coalition-building in Bangladesh’s 300-seat parliament. The JeI’s 18 seats in 1991, 3 seats in 1996, 14 seats in 2001, and 2 seats in 2008 attest to the group’s small but dedicated core of supporters. The JeI’s mantra of “vesting complete faith in Allah’s law,” however, was not enough to secure the support of militants such as Bangla Bhai, who rejected the JeI’s decision to accept female leadership in Bangladesh in the form of current Prime Minister Sheikh Hasina and former Prime Minister Khaleda Zia. Bangla Bhai, in fact, wholly rejected the JeI’s ideals, and instead charted a course of destruction and violence that thankfully did not last long. At any rate, today the JeI, as with the JMB, has been defanged. Large numbers of its cadres have been arrested and put in jail, and it has been banned as a political party. It is also banned from running in elections.

Bangladesh is no stranger to mass violence. Nonetheless, this form of violence, seen in 2014 and during other election years, is different in a major way from the violence incited by the likes of Bangla Bhai: The former has traction, and the latter does not. During election years, activists of all political parties engage in bloodshed as part of their determined efforts to win elections for their candidates and to help them stay in power. Meanwhile, to reiterate, the ideals of Islamic extremism are largely rejected by the people of Bangladesh; the country’s Muslims are generally moderate and tolerant.

An example of Bangladesh’s moderate and tolerant posture can be observed when Muslims, Hindus, Christians, and Buddhists join and enjoy each other’s religious festivals like Puja, Eid, Christmas, and Buddha Purnima together. National holidays are declared for the major religious festivals so that all people regardless of their religious identity can participate.

A large demonstration that included university teachers, artists, singers, other cultural personalities, students, and the general public mobilized against the destruction of a sculpture of folk singer Baul Lalon Shah, a symbol of secular culture, in front of the Dhaka Airport. Such widespread sentiment indicates that in Bangladesh, people generally reject communalism and intolerance. It is this mentality of the Bangladeshi people to embrace and enjoy each other’s cultures that makes Bangladesh less appealing for radicalization.

The JeI—even with its mantra of “Allah’s Law,” which in some ways echoes IS rhetoric—has a very different modus operandi and set of priorities from the likes of the JMB. The JeI, through its participation in politics, wishes for a larger say in the governmental politics of Bangladesh; several JeI top brass, in fact, have served as ministers in the cabinet. While the JeI has been described by some as a terror outfit, its activities are in fact more reactions to political decisions made by the ruling party. The JeI’s major protests are always in response to prosecutions of its top figures. The JeI does not protest about Bangladeshi women not wearing burkas, and it does not stage marches that advocate for the strict imposition of sharia law. The JeI seeks to regain its status as a key parliamentary player and influential coalition-builder that it enjoyed in the past.

Thanks to increased counterterrorism efforts spearheaded by Prime Minister Sheikh Hasina, IS has few allies that can help it tap into Bangladesh’s large Muslim population. Pro-IS sentiment, simply put, is very weak in Bangladesh. Consider that in an ignominious list of the most pro-IS tweeting countries, Bangladesh is nowhere to be found. IS’s much-vaunted social media reach has not had the desired effect on Bangladesh’s largely moderate and tolerant population, which at the end of the day is more concerned about putting food on the table than embracing religious fundamentalism.

Ominously, however, there are warning signs that the Bangladesh could one day succumb to IS’s influence. In addition to those European nationals of Bangladeshi origin who have fought for IS, two Bangladeshis were arrested recently for conspiring to fight in Syria. A British citizen of Bangladeshi origin was also arrested while attempting a recruitment drive in the northeastern districts of Sylhet and Habiganj, districts which border the Indian states of Tripura and Shillong. In early 2015, a regional co-coordinator for IS was arrested in Bangladesh along with eight other accomplices in attempts to “establish a caliphate state in Bangladesh.” There have also been reports of IS promotional activities over social media with an “ISIS in Bangladesh” Facebook page and YouTube videos showing individuals pledging allegiance to IS, all of which have been removed. Additionally, if the JeI is unable to rehabilitate itself and become an influential political force, its desperation may well lead it to start incorporating more extremist schools of thought.