Will Israel and China Sign a Free Trade Agreement? 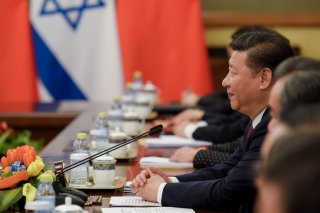 The discussions indicate the latest step in China’s attempt to increase its influence in the Middle East, following efforts to enhance its partnerships with other important players in the region, including Iran, Saudi Arabia, and the Gulf Cooperation Council (GCC), the six-country political and economic union that includes Saudi Arabia along with Bahrain, Kuwait, Oman, Qatar, and the United Arab Emirates. The South China Morning Post article interprets China’s negotiations with Israel as perhaps being motivated by more than economic ambitions; its author notes that such “a trade pact would make it easier for China to work with Middle Eastern nations on broader issues by showing it does not align only with Arab nations as in the past.”

Will Israel’s growing intimacy with China imperil its relationship with the United States? It is highly unlikely. In January 2022, Haaretz reported that Israel would “notify Washington about significant deals it strikes with China, and said it would reexamine these deals if opposition is raised.” Then, in August, The Times of Israel noted that due to pressure from successive American presidents, first Donald Trump and now Joe Biden, many in Israel considered the “honeymoon period” between their country and Beijing to have concluded.

At the time of the Haaretz story toward the beginning of the year, however, Middle East Eye opined that “Ultimately, Israel’s promise to the US over China indicates a short-term perspective, aiming to gain some points with the Biden administration at the expense of Israel’s long-term economic interests.” Consequently, reports of an imminent free trade agreement between China and Israel suggest that the latter could be hoping to prioritize its economic interests—although it remains unclear how much of a tradeoff this represents.

It will likely take more than a trade deal to meaningfully impact relations between Israel and the United States. After all, just this week, the State Department was widely criticized for what was deemed an inadequate response to the Israel Defense Forces’ May killing of Palestinian-American journalist Shireen Abu Akleh. A recent essay in Mosaic magazine by Assaf Orion, the director of the Israel-China Policy Center at Israel’s Institute for National Security Studies, contends that fears of Israel “Falling Into China’s Orbit” are highly overblown. “The Jewish state has drawn realistic conclusions rooted in a recognition of both the risks and the benefits presented by China, and structures its policy accordingly,” writes Orion. “Likewise, Jerusalem doesn’t have to choose between Washington and Beijing, because it’s already chosen the former.” But if Israel were to enter a trade pact with China, it would nonetheless go against the wishes of two consecutive U.S. presidential administrations.

Further, even the perception of closer ties between Israel and Beijing could have an effect on American relations with each of these countries, and perhaps on the role of the United States in the Middle East more generally.

Focusing on China is an especially useful tool for those pushing for the United States to maintain a muscular foreign and defense policy. For example, as China’s presence in Africa has grown in recent years, former government officials have made the case that the United States must be prepared to match Beijing’s move as a way to balance out its influence. In Washington, too, consensus that a rising China poses dire challenges to the United States led to the passage of the Chips and Science Act, a $280 billion technology investment bill, with bipartisan support.

Some in the United States have already been asserting that calls for a reduced American presence in the Middle East have opened the door for China to pursue its own economic and political interests in the region and replace American influence with its own. Signing a bilateral trade deal with the United States’ closest regional partner will surely embolden those voices.

From an Israeli perspective, this is also an interesting occurrence. In January, Omar Barghouti, the co-founder of the Boycott, Divest, Sanctions (BDS) movement told Middle East Eye that

Israel has pre-emptively and desperately attempted to strategically pivot towards China, India and other non-western states to compensate for its eventual loss of its enablers, funders and sponsors in the West [...] This attempt has little chance of success given that in these countries, unlike in the US and Europe, Israel totally lacks strategic leverage.

Although Israel continues to face international condemnation for allegations of human rights abuses and state-sanctioned violence, recent news suggests that Barghouti’s prognosis that “China will have little use for ... increasingly a world pariah, like Israel” may be incorrect. In fact, Israel and China have been able to maintain a cooperative relationship, despite the former vacillating between condemnation and silence on China’s human rights abuses in Xinjiang and the latter’s standing support for Palestinian statehood.

Nevertheless, for Israel, China cannot replace the United States—and isn’t trying to. Thus, if reports from months past are accurate, Israel would not enter a potentially impactful trade deal without clearing it with Washington first. This raises doubt that a trade deal between China and Israel is imminent after all.