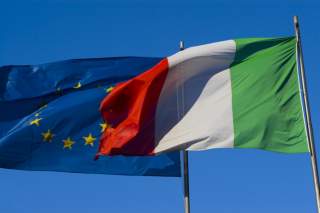 Italy’s economy is faltering again. Its continued weakness threatens the eurozone. As its third largest economy, Italian failure could place unsupportable burdens on Germany and the few other strong economies presently sustaining the union. The country’s economic setback also weakens the crucial reform agenda set by Italy’s new prime minister, Matteo Renzi. An end to this effort would deprive Italy, and by extension, the rest of Europe’s troubled periphery, of any prospect for the economic efficiencies and growth with which to meet financial obligations. A declaration of defeat for the common currency and dissolution would be premature, but the trends are worrisome.

The economic news certainly offers little encouragement. Second-quarter figures recently released show that Italy has slipped back into recession. Conventional reckoning designates this as its third in five years. Such descriptions, however, are little more than a technical game. The underlying fact is that Italy has suffered a single, long recession for the past three years, during which it has enjoyed only one quarter of growth. The Italian economy is now 9 percent smaller than it was before the crisis broke and has shown no gains on balance since 2000. Because the economic weakness has limited the flow of tax receipts, Rome’s budget deficit this year looks set to exceed the 3.0 percent of gross domestic product (GDP) allowed by EU guidelines. Italy’s outstanding public debt stands at some €2.1 trillion, verging on an outsized 136 percent of GDP, up from 130.2 percent last year.

This continued weakness is all the more ominous because the rest of the zone, including its stronger members, seems also to have faltered. Germany’s all-important factory orders showed a sharp decline recently, disappointing widespread expectations of an increase. The French economy is stagnant and only avoids the recession label on technical grounds. During the first quarter of the year, the economies of seven of the eighteen euro zone members shrank, and many governments are cutting their growth forecast for the rest of the year. Spain grew barely 0.5 percent in the second quarter, from a remarkably depressed base. Also ominous are reports of deflation. French consumer prices fell 0.4 percent in July, Portuguese prices fell 0.7 percent, and Spain saw the steepest price slide in five years. This picture lessens the prospects of any lasting financial solution, while the German weakness in particular, if it lasts, could take from the rest of the zone its greatest source of support.

The Italians blame their economy’s recent setback on renewed turmoil in the Middle East and on the tensions with Russia over Ukraine. Both places, they point out rightly, are important export markets for Italian products, especially the fashion and luxury goods at which the Italian economy excels and for which it has a strong reputation. But accurate as such claims no doubt are, they cannot explain this much-longer period of economic malaise. In that context, the specific reasons for the second quarter’s economic shortfall hardly matter. It is this ongoing weakness that not only threatens the zone’s immediate stability, but also makes fundamental reform simultaneously more urgent and more difficult to implement.

It was former Italian prime minister Mario Monti who first explained the essential need for fundamental structural reform. Economic growth is, he argued, essential for Italy and the rest of Europe’s periphery to meet their financial obligations and so resolve the crisis. But the legacy of past budget profligacy makes it impossible to use stimulative government spending to promote growth, as Italy and others have done in the past. If investors got wind that Italy was turning back to such practices, they would worry over a new avalanche of debt, turn away the Italian obligations already trading in markets, and in the process, make it insupportably expensive, if not impossible, for Rome to borrow. Since the austerity required to avoid such reactions also dampens the pace of economic growth, the only answer to Italy’s dilemma, Monti argued, were reforms that could otherwise make the economy more dynamic, efficient and competitive. He certainly had a fertile field in which to sow his reform seeds. Italy had built up a stifling array of regulations in labor and product markets that had made the country notably uncompetitive and inefficient, even by European standards.

Monti made some impressive initial gains in labor-market reform, but the effort slowed when he left office. It was, as a consequence, encouraging when Renzi renewed the reform effort upon entering the prime minister’s office last February. But even now that politics seems to have aligned for reform again, this economic weakness raises doubts. Because the good effects of reform will take time and will require shifting budget priorities, the effort demands patience and a willingness to make interim sacrifices, qualities that are difficult enough to come by in good economic times, much less in a pressed environment.

The extent of the strain is evident in Renzi’s budget maneuvers for just the first stages of his reform agenda. His aim, for instance, to free up labor markets by bringing Italy’s heavy labor taxes into line with the eurozone average will deny Rome revenues of an estimated €32 billion that his government will need to make up with savings elsewhere in its budget. That would be a tall order in the best of economic environments. It is doubly difficult in a shrinking economy where other revenue sources are also shrinking and demands for social services are growing. Renzi’s government would have to find an additional €18 billion to rationalize the unemployment benefits program as promised, €7 billion for promised tax cuts to low-income people, and €5 billion for Italy’s long-neglected schools. It would also need to find €13 billion to refurbish much-neglected infrastructure. Ports in Italy, for example, are in such disrepair that it takes seventeen days to export goods, half again as long as the EU average.

No doubt there is enough in Italy’s notoriously bloated budget that the prime minister could tap to finance these reform objectives. But having the room and even finding those sources is very different from actually implementing a change in budgetary priorities, especially in a pressured economic environment. Undersecretary to the prime minister, Graziano Delrio, has quickly assured all and sundry that government plans to wring savings from elsewhere in the budget are on track—but then again, he would say that.

If, despite the exigencies of immediate economic setbacks, Renzi can stick to these and further plans for fundamental economic reform, there is reason to expect accelerated economic growth down the road, despite the overall budget austerity otherwise required. That prospect could relieve much of the present financial strain by promising a renewed flow of real economic resources with which Italy could discharge its overhead of financial obligations. Even if none of the rest of Europe’s troubled periphery were to follow such a reform example, the relief from Italy’s burdens would help the eurozone generally by freeing resources from its stronger economies to help others. If others—Spain, Greece, France, Portugal, and so on—follow the reform example, the zone would offer a promise of still-greater relief. But if immediate economic pressures derail the reform effort, in Italy and the rest of the periphery, the financial crisis would have no end in sight, and whatever Germany’s commitment, the probability of the zone’s dissolution would rise meaningfully.