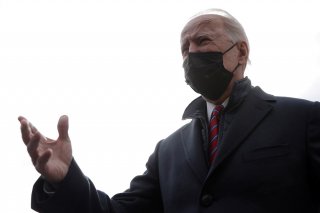 President Joe Biden has earned a generally positive approval rating during the first two weeks of his term in the White House—but individual polls reveal a stark partisan divide in perceptions of the president, hinting a brutal blow of Republican resistance ahead.

Biden originally positioned himself as the unity candidate at the onset of his presidential campaign, promising to mend the disconnection between both sides of the aisle and work to swiftly pass bipartisan legislation.

But with pressure ramping up on the president to pass another round of coronavirus relief, Biden’s considering ditching the unity pledge and passing the bill with or without Republican support—a decision could have an impact on voters’ future sentiment regarding the president.

A Marist poll released Monday found that 49 percent of respondents said they approve of Biden’s job performance since he’s taken office, while 35 percent said they disapprove and 16 percent are unsure. The results included that 91 percent of Democrats gave Biden’s performance positive marks, with a plurality of independents—46 percent—saying they approve of his job so far. Republican disapproval, meanwhile, is at 78 percent.

Another poll, conducted by Monmouth University, discovered that Biden has the majority approval among participants, with 54 percent saying they approve of his job performance so far, while 30 percent disapprove. But the survey highlighted yet another instance of sharply divided partisan lines, as 90 percent of Democrats, 47 percent of independents and just 15 percent of Republicans approve of Biden’s job.

While this gap may appear concerning for lawmakers and voters, polling experts are not surprised with the results.

Sapiro added, “All research shows that the public follows their leaders. The difficulty right now is that to the degree that the Republican party has become in many ways the Trump party, with deep connections to the extremes like QAnon, many Republican legislators are afraid to work publicly with Democrats or to seem to go against the extreme in the party for fear of being primaried to their right.”

And clear-cut partisan splits at the start of a presidency aren’t unusual, as both former presidents Donald Trump and Barack Obama battled with the heat of brutal push back from their opposing party. Though, Biden’s overall approval ratings are short of Obama’s roughly 62 percent during the initial days of his presidency, and compared to Trump—who started with the lowest approval marks in modern polling history—Biden has maintained consistently higher ratings than his predecessor.

It’s important to note, however, that Biden’s make up of his approval ratings is vastly different than that of Trump’s, as the president has been boldly favored by independents—a group that often disapproved of the former president’s job performance. Experts think continuous support from independents can bolster Biden’s presidency and overall success in passing legislation.

“Stalwart Republicans are still with President Trump. Just like presidents Trump and Obama, we see a sharp partisan divide between how people view presidents of the same party and presidents of the other party. Getting a majority of Americans for Biden is about winning at the margins; shaving off small slices of Republicans, capturing as many of the small population of independents as he can, and running up the score among Democrats,” John Cluverius, assistant professor of political science at the University of Massachusetts Lowell, said.

Sapiro slightly echoed Cluverius’s remarks, adding that while there “is not much” that presidents can do to garner votes from their opposing party, Biden “must work to keep Democratic turnout and votes, and must work to gain support from Independents, including former Republicans who have been repelled by the Republican right and apparent support for the insurrection attempt.”

Biden may be luring pushback from Republicans—especially more recently over his $1.9 trillion stimulus package and executive orders to reverse Trump-favored policies—but it’s also remarkable that hundreds of GOP voters have disaffiliated from the party across the country since the riot at the U.S. Capitol on Jan. 6.

“Biden has already gained support from some Republicans, but it’s hidden. Voter registration data show a lot of Republicans either disaffiliating from the Republican party or becoming Democrats outright,” Cluverius said. “The way he keeps shaving off support is by ending the pandemic, passing popular policies, and avoiding scandals.”