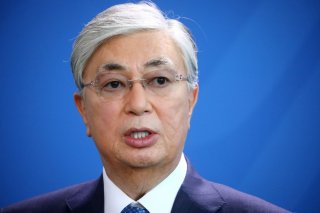 As the first female president of Moldova, Maya Sandu, appointed Natalia Gavrilita to be the fourth female prime minister of the country, other Eastern European and Central Asian states are taking notice of the political advancement of women in the region. But progress is uneven in the region. Lithuania’s remarkable success has elevated it to number eight in the world in closing the gender gap, Georgia has placed forty-ninth, but Russia, Armenia, Azerbaijan, and the Central Asian states are in the second half of the list among 156 assessed countries in the 2021 Global Gender Gap Report.

Kazakhstan ranks eightieth, one position ahead of Russia. Despite having equal access to education and health care, women in Kazakhstan continue to suffer from disparities in economic opportunities and political representation. And although more girls than boys enroll in college, and more women attain master’s and doctoral degrees, women are still earning on average only 67 percent of what men earn. Paradoxically, the more successful a woman’s career is, the greater the level of pay discrimination she faces. The pay gap is particularly wide among women leaders of organizations—they are paid half of what their male counterparts earn in equivalent positions. In comparison, women in the United States currently earn on average 84 percent of what men earn, including in executive positions.

Kazakhstan has made notable strides in two main areas concerning gender equality—women’s access to education and health care. The latest Global Gender Gap Report gives Kazakhstan very high scores for educational attainment, 0.995 (where 1.00 = parity) and 0.975 for health and survival. The economic participation and opportunity index of 0.728 is lower, mostly due to the persistent income inequality.

The coronavirus pandemic exacerbated the economic gender gap, disproportionately affecting women in Kazakhstan and across the globe. The World Economic Forum, which runs the annual Davos summit of political and economic leaders, has estimated that the pandemic will delay closing the gender gap worldwide by an entire generation. It will take 135.6 years instead of 99.5 years as it predicted in 2019. Eastern Europe and Central Asia will be on track to gender equality in 134.7 years.

But Kazakhstan wants to speed up this process. In July, it became the latest country to join the World Economic Forum’s Global Gender Gap Accelerator program. Only a few countries have taken this step to counter gender inequity through a national public-private collaboration platform between the government and main employers, the only successful way to increase the economic participation of women and eliminate gender pay discrepancies.

With a territory the size of Western Europe and one of the lowest population densities globally, closing the gender divide in Kazakhstan will mean boosting economic growth and reducing vulnerability to poverty, especially in rural areas. As half of the country’s population lives in rural and underdeveloped areas, the pandemic has not only exposed economic and social vulnerabilities, but is also likely to exacerbate them and put rural women at an increased risk of poverty.

The Organization of Economic Co-operation and Development (OECD), which Kazakhstan aims to join in the next decade, has calculated that if women’s economic participation rates converged to men’s by 2030, overall GDP would rise by an estimated 12 percent across member states. This would be a boon for a state that only became independent thirty years ago.

The lowest gender gap scores of Kazakhstan are for political empowerment of women, with the index hovering at 0.141, which places the country 106th out of 156 states in the 2021 report. Kazakhstan’s National Gender Strategy of 2006 envisioned women occupying at least 30 percent of decision-making roles at all levels of government by 2016. The target seems close in some areas, while others have seen a backslide. Women’s parliamentary representation, for example, has significantly increased—from 17.8 percent in 2011 to 27.1 percent in 2021, almost equal to that in the United States.

The latest electoral law reforms in 2019 boosted women’s representation in parliament by introducing a mandatory 30 percent quota for women and youth on the electoral party lists. However, only the Ak Zhol party’s candidates were led by a woman in the January 2021 election. In May 2019, Ak Zhol made history supporting Kazakhstan’s first female presidential candidate, banker and member of parliament Daniya Yespayeva. Although Yespayeva did not win, her nomination will remain trailblazing for women in the region.

At the same time, the number of women in ministerial positions has declined from 20.5 percent in 2014 to 9.5 percent now. In fact, there are only two female ministers in the current government and all four deputy prime ministers are men. Just four women serve as Kazakhstan’s ambassadors compared to sixty men. Furthermore, although Kazakhstani women make up 56 percent of government administrative staff, they hold just 12 percent of the political positions in the state institutions, according to Kazakhstan’s Bureau of National Statistics.

The evident disparity prompted Kazakhstan’s President Kassym-Jomart Tokayev to propose this year to increase the number of women in leadership positions in government agencies and state-owned companies. Embracing the Global Gender Gap Accelerator program and establishing a joint body of government ministers and business executives to work for achieving gender parity is a promising mechanism to ensure women attain more economic and political power. Kazakhstan’s women are determined to bridge the gender gap sooner than predicted, at least by one generation.