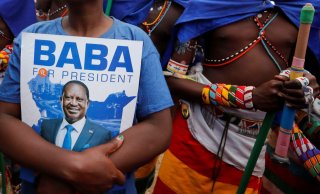 Although it does not get much press attention in the United States, Kenya is having an important summer, with a presidential election looming in the weeks ahead. With luck, this important event in one of Africa’s half dozen most pivotal countries could give a boost to the overall democratic trajectory of the continent—and provide the world what would be a rare dose of good news these days.

Africa has come a long way in recent times. In the 1980s, when one of us was a Peace Corps volunteer in the former Zaire and most African countries had gained their independence only a couple of decades before, Africa had no real democracies and very little open political debate. Things have improved considerably since that time. There was major progress in the 1990s that continued into the 2000s.

Over the last fifteen years, that progress has plateaued, and in fact, lost a little ground. But it has not been reversed. A good election in Kenya could help get things back on the right path more generally across the continent, perhaps.

There have been several major turning points in Africa’s generation-long pursuit of more representative government and more open political debate. Elections became common in the years after the fall of the Berlin Wall in Europe and the world’s “third wave” of democratization. Notably, in the month following Benin’s 1991 presidential election, African journalists in Windhoek, Namibia, emphasized the need for a free, independent, and pluralistic press. The Windhoek Declaration was soon created and has since inspired press freedom not only in Africa, but around the world. In 1990, only four countries were considered “Free,” and only three were assessed by Freedom House as having a free press. Two years later in 1992, nine countries were “Free,” and six countries were credited with a free press. This took place as the continent’s first real democracies were sending up shoots.

Progress continued in the early 2000s. The number of “Free” countries peaked at eleven in 2006; that same year Freedom House determined eight countries to have a free press. In addition to an increase in multi-party elections taking place across the continent and an expansion of privately owned media outlets, the digital sphere grew during this time. With the internet came the opportunity to redefine the direction of news and information.

Unfortunately, as the era of social media arrived a few years later, life got more complicated. Just as with the Arab spring, Twitter, Facebook, and other new vehicles of communication were not able to produce big new breakthroughs in democracy or press freedom in Africa. Since 2006 the number of “Free” countries has declined from eleven to eight. Between 2006 and 2017, the number of countries assessed by Freedom House as having a free press went from eight to three. Just as the “Arab spring” turned out to be less than advertised, Africa overall also suffered setbacks in freedom, democracy, and the media in the second decade of the century. Yet the positive numbers are still much better than a generation ago; not all progress has been lost.

Consider a few specific cases among the bigger countries of the continent. Ethiopia, Sudan, and the Democratic Republic of the Congo (DRC) have probably lost ground in recent times. All were considered “Not Free” by the 2022 Freedom in the World country reports. Media were severely restricted in each of these countries. At the end of 2021, Ethiopia had the second highest number of journalists in sub-Saharan Africa in jail. Attempts to further silence the press were evident in DRC as three journalists were assassinated and at least 106 were subject to detention—more than double of the reported abuses in 2020. After the October 2021 coup in Sudan, journalists were arrested, and broadcast stations were shut down. In southern Africa, Angola, reported as “Not Free,” has had the same ruling party since independence in 1975 and most of the media is owned by the state.

In some places the picture is mixed. Nigeria is reported as “Partly Free” by Freedom House and is said to have a “vibrant media landscape.” However, media freedom is often restricted by officials harassing and arresting journalists, in addition to legislation such as criminal defamation laws.

South Africa, on the other hand, is detailed as “Free” with freedom of the press upheld by the constitution and in practice. Tanzania is assessed as “Partly Free.” Its media landscape may be opening up under the new leadership of President Samia Suluhu Hassan. The trend is not all good; her government temporarily suspended two newspapers. But the overall atmosphere is modestly improved relative to previous years.

Returning to Kenya, it is reported as “Partly Free” today by Freedom House, with vibrant and diverse mediascapes. Not all is well; laws such as the Cybercrimes Act in Tanzania and Kenya contain vague language often used to restrict journalists or quell dissent. But most reports we have heard from the field this spring and summer give evidence of a vigorous election campaign well covered by the press.

In short, there are troubling trends in Ethiopia, DRC, Sudan, and Angola. There is hope from Tanzania to Nigeria to South Africa—and to Kenya. The continent as a whole has made huge progress over the last generation yet lost some of that ground over the last fifteen years. The verdict is mixed.

All of which brings us back to Kenya’s elections. Twenty years ago, the political opposition won an election for the first time, marking the 2002 election as a watershed moment. Despite backsliding in recent years, there is also an overall optimistic outlook on the upcoming elections, as the incumbent prepares to step down. The August 2022 election will be only the second time a Kenyan president will leave office when the designated term limit so requires. In addition, the level of post-election violence experienced in 2007 seems unlikely, especially after the creation of the 2010 constitution and the Supreme Court’s decision to require a redo of a flawed election in 2017, as well as less political campaigning and organizing along purely ethnic lines. These developments provide outlets in Kenya other than violence who might feel that the electoral process has been less than fair.

We will soon see. The first-round vote is August 9.

Tina Luchetta and Michael O’Hanlon are scholars at the Africa Security Initiative, a program administered by St. Lawrence University and the Brookings Institution.