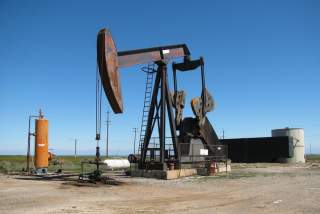 With oil prices falling, some are worried—and others hope—that the U.S. shale oil bubble will burst and, subsequently, that U.S. oil production will drop. However, given a number of factors, the production of shale oil is not likely to slow significantly, even at current lower prices.

There are two popular theories as to why the price of oil has dipped. The first is that Saudi Arabia is overproducing in an attempt to kill U.S. shale and retain market share. The second is that the United States is collaborating with Saudi Arabia to punish Russia, as a large fraction of Russia’s federal revenues come from oil.

In reality, there is little evidence to suggest either of these theories is correct. While shale vulnerability and Russian exposure are positive externalities to Saudi Arabia in a lower-price paradigm, it is more likely that the Saudis are overproducing primarily to exercise power over other OPEC members. A decline in price also reduces revenues for Saudi Arabia, and as such, it is not inherently beneficial to keep prices low. But, lower prices will send the message that cooperation and honoring quotas is in all members’ best interests.

In any case, the shale sky is not falling.

To understand the effect of lower prices on the shale-oil industry, let’s look into North Dakota’s Bakken, one of this country’s largest oil fields. Oil production from the Bakken has increased by 1 million bbl/d in the last five years, helping to drive the massive increase in U.S. oil output, and now accounts for 15 percent of all U.S. production. A key question: is the shale boom in trouble in the face of low oil prices? Based on my resource characterization research and production scenario analyses, the answer is no in the short- and mid-term.

The outlook for U.S. shale production is better than naysayers think, as production is somewhat insulated from price volatility by a number of factors: resource heterogeneity, rent distribution, drilling contracts, existing production and long-term planning. But, if lower prices prevail over a long period of time, the production will begin to decline. Although all U.S. shale oil fields have unique characteristics, the Bakken is an interesting case to consider for what could happen under low-price scenarios. In fact, because of the transportation issue, remoteness and other cost factors, other plays in Texas like the Eagle Ford and the Permian basin may be even more shielded from a price dip.

The Bakken is a highly heterogeneous oil field. This means that the amortized cost of production per barrel ranges from about $20/bbl in the most productive areas to over $100/bbl in marginal areas. The rents (profits) from oil and gas production are distributed throughout the entire production pathway. In times of high oil prices, oil companies can afford to pay a lot for services. In times of lower prices, the cost of services will drop. As prices fall, so will costs, but production doesn’t necessarily have to.

Because most rigs are under contract between service companies and oil companies, the rigs will drill for the duration of the contract, regardless of what the oil price is. As such, there is a lag between a price drop and when drilling actually stops and rigs are let go. Additionally, although the production of an individual well drops significantly (by about 50 percent in the first two years), the rate of decline slows thereafter, and wells will produce some oil for a long time. Even if all drilling stopped immediately (it won’t, for many reasons), in four years from now, North Dakota will still be producing about 400,000 barrels per day, all from wells that exist today. This production rate is still more than what the state had produced in its history until 2011.

It is not clear that a low-price paradigm will prevail in the long run, and many think it will not. The larger producers in the Bakken (Continental, Statoil, XTO and Hess) are well diversified, cash rich, have strong balance sheets—or some combination of the three—and will continue to drill even at lower oil prices.

Depressed oil prices may hurt some marginal companies, and will cause the wind-down of development in marginal areas, but at large, oil-production levels in the United States will likely remain steady, at least for the foreseeable future. That is good news for shale producers and the economies that depend on those revenues and jobs.

Scott McNally is a research assistant with the Geopolitics of Energy Project at Harvard Kennedy School’s Belfer Center for Science and International Affairs. He has engineering degrees from the University of Texas and Stanford University.