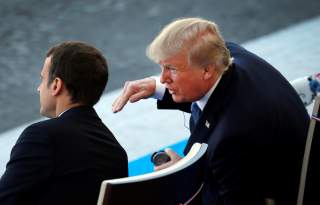 So the bromance is back. It began with a military parade in July 2017. Now it may lead to actual combat together. In a phone call on Sunday, Donald Trump and Emmanuel Macron agreed to “coordinate a strong, joint response” to Syria’s chemical attack this past week. The Assad regime, they said, “must be held accountable for its continued human rights abuses.”

Where are the British, who actually experienced a nerve gas attack on their own soil that was delivered courtesy of the Putin regime? MIA. Unlike the suave Macron, the prim Theresa May has never been able to win Trump’s affections. For one thing, she has failed to deliver the kind of military pomp that so impressed Trump on Bastille Day, which prompted him to schedule a parade in Washington in November to celebrate martial valor. Instead, Trump has bridled at the prospect of being treated like a pariah in London and outright refuses to visit. Perhaps the British will join an air strike on “Animal Assad,” as Trump dubbed him, to punish the Syrian despot for his latest atrocity, but it is Macron who is indisputably in the driver’s seat.

It represents quite a turnabout for Trump, who only last week wanted to extricate himself from Syria, to now be drawn further into the conflict. Only last week, Trump stated at the White House, “I want to get out. I want to bring our troops back home.” His statement was met with a chorus of indignation from Washington’s foreign-policy class. At a national-security meeting last Tuesday, the generals explained that it was a bad idea to leave the field open to ISIS. Now Assad has given Defense Secretary James Mattis, who looked as though he might be coming into bad odor with Trump, an opportunity to retrieve his fortunes. What’s more, it’s John Bolton’s first day at the National Security Council. Odds are that a man who wrote a memoir called Surrender Is Not An Option will not seek to restrain the president’s more bellicose instincts.

Perhaps Trump will confine himself to another pinprick strike à la April 2017. But the diplomatic maneuvering taking place suggests that Trump’s fulgurations about America First and his desire for a rapprochement with the Kremlin are taking a back seat to working with Europe. Trump did not bestow a nickname on Vladimir Putin in any of his tweets, but his aim of a rapprochement with him is looking increasingly iffy. In a new interview with Susan Glasser in Politico, Julia Ioffe speculates that Putin and Trump are headed for a real clash, one that could have calamitous consequences. At this point, it looks as though Trump may have better odds of striking a deal with North Korean dictator Kim Jong-un, who has just confirmed that he is ready to meet with Trump, than with Putin.

But perhaps Trump’s greatest test will come next week when former FBI director James Comey’s new book A Higher Loyalty appears. Trump’s aides are hoping that a trip to South America and a summit meeting with Japanese prime minister Shinzo Abe at Mar-a-Lago will help to distract their boss from what is sure to be a bombshell of a memoir depicting Trump in the most thuggish light possible. But perhaps it is only Trump’s chum Macron who will be able to soothe his rage. A joint military action would allow Trump to preen himself on his decisiveness for weeks, highlighting the contrast between him and the supposedly feckless Barack Obama who failed to enforce his redline. A new Franco-American Entente Cordiale is rapidly arriving. The Anglo-American special relationship, you could even say, has been mothballed. When the Macrons arrive later this month, Trump plans to honor them not only with a private dinner at Mount Vernon, but also with the administration’s first official state dinner. Ooh la la.