Will Macron's Overhaul of the French Economy Succeed? 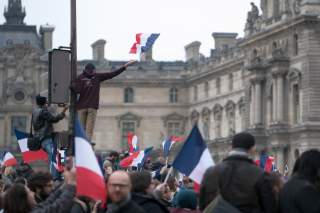 Emmanuel Macron is nothing if not ambitious. True to his campaign promises, he has put forward bold proposals to reform France’s stifling regulatory and tax regimes. Since his party has won a handsome majority in the assembly, prospects for his effort look good right now. Eventual public acceptance remains an open question, however, and it has been street protests more than votes that have killed reform efforts in the past. Still, his effort holds out a greater prospect for economic health in France than in a long time. It would also do much for the health of European Union.

Proposed reforms would begin to lift economic weight of France’s burdensome labor code, the 3,200-page Code du Travail. Its rules raise costs, impede growth, depress productivity and limit the economy’s flexibility at every turn. They, for instance, demand that all companies with fifty or more workers offer a minimum of five-weeks paid leave and 156 weeks parental leave. They limit the workweek to thirty-five hours and—in some cases—demand retirement when workers turn sixty-two years old. They obligate companies with one thousand or more employees to place laid-off workers in new positions and retrain them at the firm’s expense. They give employees the right to challenge their dismissal for up to five years and impose severe penalties on firms that lose such cases. Because the code insists on nationwide pay and work-rules, it limits the ability of management to adjust for changing economic conditions. The rules also discourage inward investment by forbidding international companies operating in France from laying off workers in the country while their subsidiaries elsewhere in the world are in good financial health.

These regulations, combined with high corporate taxes and complex—as well as restrictive—zoning rules, have done great harm to the French economy. During the past seven years, France’s gross domestic product has never grown above 1.5 percent a year in real terms. Because rules on layoffs and dismissals are so restrictive and expensive, management has shown a great reluctance to hire full-time help for fear that they could do nothing with them should economic circumstances change. Accordingly, job growth has stalled, while more than half of French workers now work on limited contracts, not as full-time employees. French unemployment overall verges on a high 10 percent of the workforce overall, and youth unemployment stands at almost 22 percent.

Macron would need the ambition of a Napoleon to take on all this. His recent proposals do, however, make a start. He would keep the economically stifling thirty-five-hour workweek and the equally burdensome rules that workers retire at what is considered today to be a relatively young sixty-two years of age. Otherwise, he would build on tentative reforms from the previous administration, called the El Khomri law, that he promoted when he worked for the Socialist government. His proposed changes would allow more firms to opt out of nationwide labor agreements on overtime pay and work rules. While the El Khomri law allows such deviations only after a union-called referendum, Macron would allow employers to call a referendum and shrink the number of consulting in-house bodies required to approve such changes. His reforms would also cap compensation amounts in employee dismissal cases and further limit the time employees have to make such complaints. To encourage inward investment, he would allow foreign employers in France to lay off workers regardless of the state of their other subsidiaries elsewhere in the world.

Outside the code, he would relieve the country’s tax burdens. Macron would cut the country’s onerous 33.33 percent corporate tax rate gradually toward a more internationally competitive 25 percent rate. To encourage investment generally, he would repeal the special 3 percent tax on dividend distributions, tax passive income at a flat 30 percent instead of today’s variable scheme that can go as high as 45 percent, and repeal France’s historical wealth tax, except on real estate. Reform would also aim to even burdens in society by reducing the difference between private and public pensions and extending unemployment benefits from only workers to the self-employed. To limit the budget impact of the tax cuts, he would trim the number of civil servants, thereby cutting public spending from 55 percent of the country’s GDP to 52 percent, and by doing so keep budget deficits within the EU-mandated 3 percent of GDP. He is, however, vague on how he would accomplish this.

In many ways, these new proposals constitute a Gallic equivalent of Germany’s Hartz reforms. Berlin instituted the reforms earlier in this century to free its economy from what then were similar burdens. Germany’s remarkable economic gains since then certainly make a powerful case for going in that direction. That country’s real economy has expanded at a faster rate than most of the rest of Europe, certainly faster than France. It has, at times, shown impressive growth spurts at annual rates or 3.5 and 4.0 percent. Germany’s unemployment rate recently came in at under 4 percent of the workforce, while its youth unemployment rate stood at on enviable 6.8 percent, especially if one is looking at it from Paris. France’s proposed reforms, as long as the list is, are nowhere near as extensive as the Hartz reforms, but any movement in the same direction clearly has promise.

Macron has more than just the German example to propel him in that direction. French economic reform is essential, he knows, to get Berlin on board with his ambitious program for the Eurozone. The new French government wants to impose a consistent fiscal policy on the zone, one made through zone-wide policy and budgeting, approved by a Eurozone parliament and managed by a Eurozone finance minister. He also wants Berlin to reflate the German economy to provide export opportunities to France and other EU members. But German chancellor Angela Merkel and her government have made clear their opposition to any such moves until fundamental economic reforms in France and elsewhere relieve their concerns that such arrangements will burden Germany with a heavy weight of dependents.

Under pressure from his desire to move Berlin, his own underperforming economy, and the need for a new president of a new party to show progress, Macron has settled on an expedited process to implement his reforms. He has asked the National Assembly, where his party recently won a commanding majority, to grant him the power to alter labor regulations by decree. The reforms would then go into effect before any lengthy and probably divisive parliamentary debate could delay them. If he gets this power, which seems likely, the government will then negotiate the details of the decree with unions and employers groups over the summer and presumably put them into effect as early as September. The process is not quite as antidemocratic as it seems. Once in effect, the new rules would require legislation from the assembly.

Even with a pliable assembly and decree power, these reforms face a battle. France’s powerful unions are far from on board with them, and it was their months-long street protests that blocked reform under the last administration—or rather forced such a watering down that Macron resigned in protest. Already, Philippe Martinez, head of the second largest and more leftist union group, CGT, has called for a day of strikes and demonstrations on September 12, presumably just in time for the proposed decrees. He has expressed the union’s extreme opposition to any change that allows the negotiation of wages and work rules at the company level. On a more positive—or rather less negative note—Laurent Berger, head of the larger French Democratic Confederation of Labor (CFDT) union, has said that he will wait to appraise the results of coming negotiations and that for now “[t]here is no blind trust or widespread distrust.” Especially since the CFDT recently surpassed the CGT as the nation’s largest private-sector union, those contrasting attitudes would seem to augur well for reform, or at least better than how matters stood under the Socialists. Also on the positive side is the feeling expressed recently by government spokesman Christophe Castaner that the nation voted “to free up labor in the country.”

The stakes clearly are high. France’s economic prospects depend on reform. To no small extent, prospects for the Eurozone do as well, not the least because Brexit removes a strong economy from the equation, one that Germany otherwise could have counted on to bear some of the burden. Perhaps there is reason for optimism given that Macron’s election speaks to a welcome and more farsighted aspect to French politics than has prevailed to date—one that will not readily repudiate the ballot box in favor of street protests and that will allow the reforms needed to improve French economic and Eurozone prospects. The test will come in the fall. No doubt the French economy and the EU will survive if the reform effort fails, but their political-economic future will look a lot less promising.