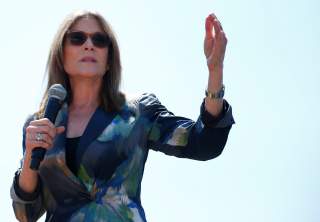 Marianne Williamson has emerged as one of the more internet-savvy 2020 Democrats in a field overflowing with attention-seekers. Her mature manner, sultry feminine voice, and her insistence that Democrats focus on deeper, spiritual rot than on niche public policy led her to be the top democratic candidate people searched for on Google after her debate performance last month.

Yesterday she revealed a detailed plan for her proposed “United States Department of Peace,” an idea that further separates the self-help author and spiritualist from the cavalcade of senators and congressmen she’s challenging for the nomination.

The concept of the department is not original to Williamson, but it is something she’s been committed to for well over a decade. She was supportive of the idea when it was proposed by former Congressman Dennis Kucinich (D-OH) during his presidential campaigns in 2004 and 2008. While the focus of Kucinich’s Department of Peace was international diplomacy and nuclear nonproliferation, Williamson’s proposed department would be far more omnipresent.

This is far from just adding another diplomatic wing to the State Department. Such an entity would conceivably become the most powerful position in the presidential cabinet.

The Department of Peace (DOP) would juggle responsibilities in both the domestic and foreign spheres, from overseas aid to gun violence in America’s schools. The secretary of peace would sit in on the National Security Council, and be empowered to coordinate with numerous other departments, including the State, Defense, Justice, Education, and Agriculture.

This single department would put allocating foreign aid, instituting new national education programs, and overhauling the entire criminal justice system all under one roof. Theoretically, would the secretary of defense and the attorney general take more orders from the secretary of peace or the president?

The plan mentions a follow-up agency called the “Department of Children and Youth” that DOP would also work with but doesn’t go into details of that program. But Williamson puts a heavy focus on early childhood intervention. Her plan seeks to “teach violence prevention and conflict resolution” in public schools, along with treating gang psychology.

Hillary Clinton, the first female presidential nominee of a major party, wrote in her 1996 book It Takes a Village that raising children requires a community effort. Williamson puts this idea on steroids, with the view that childrearing has to become a policy issue on a national scale. “Lasting peace requires its active and systematized cultivation at every level of government and society . . . Nothing short of broad-scale investment and government reorientation can truly turn things around,” her page says.

The United States currently spends $50 billion on foreign aid, an amount President Donald Trump has mulled cutting. Williamson wants to go in the opposite direction, allowing the DOP to provide massive increases in humanitarian assistance which “may include aid for things like food security, health care, education, women, children and a variety of other types of aid.” The purpose would be to rebuild foreign countries and communities up to, presumably, western standards of safety.

According to Williamson, this department of vast designs would actually to be a net gain to the U.S. budget. Its funding would only require moving around current expenditures, and in the long run it would allow significant cuts to the military budget and prevent the emergence of expensive, violent conflicts by stopping their source.

While not forgetting its mission to end war, solve racism, fix the prison system, and stop gun violence, DOP will also ensure that America’s children will be provided healthy snacks. That’s why the department will “examine how elements of our food supply affect our behaviors.”

Finally, the department will create and administer a U.S. Peace Academy, a sister organization to the U.S. Military Academy at West Point founded in 1801. The academy will give attendees a “4-year concentration in peace education,” followed by a required five-year stint in either domestic or international conflict resolution. This will not just be a school for diplomats, but a one-stop factory for miracle workers trained to solve every displeasing problem in the United States and the globe.

Today Marianne Williamson reached the 130,000 individual donor criteria set by the Democratic National Committee to appear in the September and October primary debates. However, she has failed to reach 2 percent support in at least four credible polls and is unlikely to do so by the end of August. Thus, William’s vaunted Department of Peace is unlikely to see verbal combat on a national stage.