Will Modi's Visit Kick off a New Era in U.S.-India Cooperation? 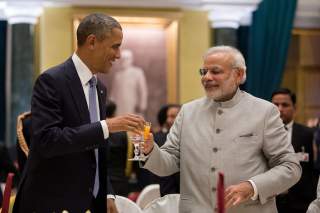 The upcoming visit of India’s Prime Minister Narendra Modi to the United States on June 7–8 at the invitation of Speaker Paul Ryan, to address a joint session of Congress, is being described as a historic movement in the bilateral ties between India and the United States. Modi will have an opportunity to reiterate to U.S. leaders that a resurgent India is committed to working together with the United States in ensuring peace, security and development in South Asia and other parts of the globe. He will also fulfill President Obama’s invitation for a bilateral visit and the two leaders will review the progress of bilateral ties.

The relationship between India and the United States was not so strong when Prime Minister Modi came to power in May 2014. In fact, bilateral ties between two largest democracies were remarkably low. At the same time, given Modi’s personal differences with the United States, diplomats and experts in both countries opined that relations between New Delhi and Washington would continue to face bad weather in the future. Surprisingly, however, showing his pragmatism and statesmanship, Modi decided to redirect efforts to sustain and deepen ties with the United States. This became soon evident when he made a state visit to the United States in September 2014, at President Obama’s invitation. Subsequently, Obama became the first U.S. president to be the chief guest at the Republic Day Parade in January 2015. Since then, bilateral ties have progressed significantly, with the two countries having held two summit-level talks and signed many transformative agreements, including the Strategic and Commercial Dialogue, to expand cooperation in all areas of common interest in the first two years of the Modi government.

Economic and trade relations form one of the most important segments of bilateral ties. This is evident from the fact that trade between India and the United States is now $100 billion, and President Obama and Prime Minister Modi have set a goal of increasing it to $500 billion in the next few years. For that to happen, the two countries have established an India-U.S. Investment Initiative, as well as an Infrastructure Collaboration Platform. U.S. industry has also expressed its desire to be part of India’s “Smart City” program by developing three smart cities in Ajmer, Vishakhapatnam and Allahabad. The passing of reforms such as the Goods & Services Tax will further boost economic ties between the two countries.

The defense sphere has emerged as a cornerstone of bilateral ties. New Delhi and Washington have extended 2005’s defense agreement for the next ten years. This underscored the two countries’ shared interests in the defense area. The United States has become India’s largest defense supplier, with bilateral defense trade between the two countries surpassing $14 billion in 2015. To further boost defense trade, both countries have made significant progress on the Defense Technology and Trade Initiative, with four “pathfinder projects” having already been identified: Raven unmanned aerial vehicles, intelligence-gathering and reconnaissance modules for the C-130J Super Hercules aircraft, mobile electric hybrid power sources, and uniform integrated protection ensemble—Increment 2. These and other projects would also contribute towards the success of the Modi government’s “Make in India” initiative, as India would coproduce them. The deepening defense and nuclear ties would increase India’s access to American advanced technology.

With the aim of strengthening military engagement with the United States and dealing effectively with the issues of terrorism, piracy and other security threats, the Modi government has agreed in principle to sign three agreements: the Logistic Exchange Memorandum of Agreement (LEMA), Communication and Information Security Memorandum (CISMOA), and Basic Exchange and Cooperation Agreement (BECA). The LEMA will allow both the countries to access fuel and supplies from each other’s bases. The CISMOA will enable the two countries to share confidential intelligence securely in both peacetime and war. The BECA would provide India with topographical and aeronautical data and products that will aid navigation and targeting. At the same time, to ensure that these agreements should not affect India’s strategic autonomy, the Modi government has asked the United States to make them India-specific. In particular, Defence Minister Manohar Parrikar made it clear that the LEMA does not mention the stationing of American troops on Indian soil. He also said that “India is in for joint military exercise but not for joint patrolling.” Thus, these agreements, if finally signed, cannot adversely impact India’s sovereignty. Further, the U.S. House of Representatives has passed amendments to the National Defense Authorization Act of 2017 seeking to bring India at par with NATO allies for the sale of defense technology and equipment; the Senate is likely to pass the same amendments.

The two countries have concrete reasons to deepen security ties with each other. There is a growing feeling among U.S. security officials and experts that, given America’s economic slowdown and increasing security crises in the Asia-Pacific the Middle East, as well as other parts of the world, it is not possible for the United States to ensure peace and security alone. Thus, Washington needs to engage rising powers like India for this purpose. As the Modi government has sped up the process of military modernization, buoyed by increased foreign direct investment in the defense sector, Washington sees economic opportunities in deepening defense ties with New Delhi.

The rise of China and its recent assertive posturing in the South China Sea is another reason for the United States to expand security and military relations with India. In fact, the Modi government has shown a desire to work with the United States in ensuring freedom of navigation and flight throughout the region, including in the South China Sea. This shift in India’s stance is critical, as it reflects the government’s determination to take a firm stance on China. This understanding has been reinforced by the Modi government’s special attention to developing triangular and quadrilateral coalitions with the United States, Japan and Australia as a part of its regional security strategy.

For its part, India is concerned by China’s position on disputed territories and by the growing nexus between Beijing and Islamabad. New Delhi feels that the presence of the United States in South Asia would help maintain the balance of power in its favor. New Delhi also knows it cannot aggressively pursue military modernization without access to advanced U.S. weaponry and technology. Modi’s ambitious Make in India initiative would not be successful without the active participation of the American defense industry, given its expertise in the field. Isolating Pakistan internationally for failing to adequately address terrorism also requires New Delhi to sustain security talks and military exercises with Washington. Another factor that has played an important role in transforming the relationship is the strong presence of the Indian-American community.

It is expected that during Prime Minister Modi’s visit, India and the United States could finalize a commercial agreement between Westinghouse Electric and the Nuclear Power Corporation of India to build six nuclear reactors in Gujarat. Given the fact that during his visit to New Delhi in 2015, President Obama had reaffirmed the United States’ position that India meets the requirements of the Missile Technology Control Regime and is ready for membership in the Nuclear Suppliers Group, and that it supports India’s early application and eventual membership in all four regimes, and that the United States has recently reiterated its commitment in this regard, it is hoped that Modi and Obama will chart out a plan to ensure India’s entry into the NSG and the other three regimes. If the NSG grants membership to India before Obama leaves office, he will be remembered as another champion of India-U.S. relations.

New Delhi and Washington could also sign defense agreements like the LEMA and others to put cooperation on a new horizon. At the same time, the two leaders are expected to discuss issues like terrorism in South Asia, U.S. military assistance to Pakistan, the H-1B visa and other issues. Thus, Prime Minister Modi’s visit could add a new chapter to the transforming India-U.S. ties.

Sumit Kumar is an ICSSR doctoral fellow at the UGC Centre for Southern Asia Studies. His PhD research work is on U.S.-India Strategic Partnership (1980–2008).