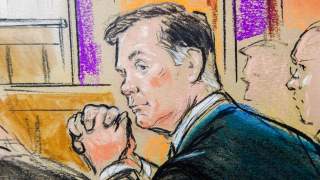 Tuesday was a bad day for President Trump. It will be harder to dismiss special counsel Robert Mueller’s Russia investigation now that he has criminal convictions under his belt. And it is more difficult for Trump to argue all the charges that have been brought have little to do with him personally now that his former personal attorney has implicated him in campaign finance violations.

Throw in the indictment of California Republican Representative Duncan Hunter Jr., putting what should be a safe House seat in play, and it has the feel of the final weeks of the 2006 midterm elections when Democrats were able to run against a GOP culture of corruption. The Democrats, you will recall, won that election and Nancy Pelosi became speaker of the House.

The “witch hunt,” as it has been called ad nauseum, has found some witches.

With Michael Cohen in the dock and pleading guilty, still more witches are sure to be discovered. For no one has more dirt on Trump than his longtime fixer.

But will any of it be presidency-endangering? Cohen attorney Lanny Davis teased the audiences of CNN and MSNBC that it might be so: “Mr. Cohen has knowledge on certain subjects that should be of interest to the special counsel and is more than happy to tell the special counsel all he knows.”

If Cohen can prove Trump had foreknowledge of Russian hacking into Democratic emails, he will have advanced the ball further than anything we publicly know about the Mueller investigation. For even after Paul Manafort’s conviction on some of the charges against him, the special counsel has yet even to allege a Trump-Russia conspiracy over the 2016 presidential election.

After the surveillance of Carter Page, the arrest of George Papadopoulos, the indictments of former national security adviser Michael Flynn and Manafort deputy Rick Gates, the discovery of the Trump Tower meeting, and the conviction of the the erstwhile Trump campaign chairman, no charges yet filed so much as attempt to assert the broader conspiracy exists.

Most the charges and much of the evidence against Manafort predate the Mueller probe and even the campaign, though his affiliation with Trump clearly enhanced his legal exposure.

That doesn’t mean Mueller won’t get there eventually. The first trial established Manafort had money problems around the time he accepted an unpaid senior position in the Trump campaign. The second will no doubt show the extent of Manafort’s financial entanglement with Russian interests.

Mueller’s last round of Russian indictments hinted in the footnotes that he was getting closer to Trump ally Roger Stone. Stone has no formal role in the administration and was never officially involved in the campaign. But it gets closer.

The special counsel has proceeded cautiously, but when he strikes he usually tries to take away the easy talking points against his investigation (though perhaps less so in some of his hiring choices). Still, no one has been charged with colluding at this point.

Solid evidence of collusion as Hillary Clinton defined it—as opposed to the unsavory example of Fusion GPS-style dirt-digging—appears to be what occurred at Trump Tower. That is the kind of evidence that is likely what it will take to truly jeopardize Trump’s presidency. Barring a massive collapse in Republican support for Trump after the midterm elections, nothing Mueller or Cohen has so far exposed to the public will cause a sufficient number of GOP senators to convict and remove the president from office.

That’s why Republicans, not Mueller and his however many “Angry Democrats,” are the target audience of the Trump and Rudy Giuliani show broadcast regularly on Twitter and cable TV. While many of the attacks have been specious, from Christopher Steele to Bruce Ohr, they have landed some real blows that will increase Mueller’s burden of proof with the lawmakers who will decide whether the next episode will end differently than it did for a previous Lanny Davis client, former President Bill Clinton.

Events have overtaken enough of Trump’s defenses that it would be imprudent to exonerate him before seeing all the facts. But the less this investigation is about Russian collusion and the more it is about sex and campaign finance violations, the more it will resemble Kenneth Starr’s far-flung Whitewater probe (which won fifteen convictions): embarrassing to the president, yet unsuccessful in bringing him down.