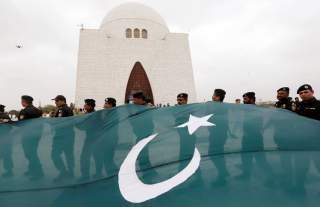 Pakistan’s supreme court’s unanimous—if disputably reasoned—decision to remove Nawaz Sharif as prime minister, together with the Pakistan Muslim League’s easy management of leadership transition, has likely averted months of political turmoil. A decision by the justices to leave Nawaz in office could have evoked bitter condemnation by a united front of opposition parties and set the stage for widespread, possibly violent agitation spearheaded by Imran Khan and his Tehreek-e-Insaf movement. If sustained, the military would probably have felt compelled to intervene.

An abrupt end to the Sharif dynasty and possible fracturing of the league over leadership succession, once thought possible by his opponents, was avoided with the designation of party loyalist Shahid Khaqan Abbasi as prime minister. Possessing an overwhelming majority in the national assembly, he should be able to serve through to the scheduled national and provincial elections next summer. The dynasty that has lasted nearly thirty years seems firm for the time being. Nawaz’s younger brother, Shehbaz Sharif, remains in command of the party’s election machinery in its heartland, Punjab Province, and Nawaz has a strong presence behind the scenes.

Admittedly, several loose ends could upset politicians’ designs, even throw the country into crisis mode. Court cases are still pending against Shehbaz and Imran. Also, it is yet to be determined whether Nawaz should be criminally charged. Notwithstanding, there is reason to believe that the country’s elites, particularly members of the judiciary and the country’s military, would prefer for Pakistan to have a cooling period in which potentially disruptive actions are shelved until the outcome of the next election.

In a Pakistan settling back to business as usual, the country’s policy agenda is likely to be notable for its continuity. The hallmark of the Sharif years—infrastructural development, now buttressed by Chinese financing—will hold priority. Major economic reforms intended to address fundamental structural problems will continue to be stymied by an elite largely comfortable with the status quo. The country’s mixed record on dealing with militant extremist groups seems unlikely to change any time soon since the strategic motives behind the selective approach toward these groups remain.

In foreign policy and security policy, the elected government’s deference to the military will be largely unaffected by the recent political developments. To be sure, some of the rough edges of the civilian-military relationship may be smoothed out. Nawaz had to be periodically reigned in by the generals while both Abbasi and Sharif are known to have established an easy relationship with the military.

China, which had reason to fear instability in the country, is undoubtedly breathing easier with the apparently smooth political transition. The civilians have had the lead in negotiating an expanded economic relationship with China that has resulted in the China-Pakistan Economic Corridor. Relations with India and Afghanistan can be expected to remain essentially unchanged. As men of business, Abbasi and Shehbaz, like Nawaz, may be inclined toward a cautious rapprochement with India but will be bound by the same red lines drawn by the military. Mutual suspicions and distrust are almost certain to keep any new overtures to Afghanistan limited. And there is little a risk-averse Pakistan is likely to do in an election year that would please a frustrated Trump administration pressing for greater cooperation on Afghanistan.

For those still looking to upset dynastic politics, and seeking deep changes in Pakistan’s domestic and foreign policies, eyes remain fixed on Imran Khan. Imran was the driving force behind recent political developments. He initiated the crisis first with his organized street protests. He challenged the legality of the Nawaz government over its alleged election manipulation and he also challenged its legitimacy on grounds of corruption. Regardless of the public’s political beliefs, Imran has acted to sensitize people to the inequities of the system and to the need for a cleaner leadership.

What protest politics could not give to Imran Khan, the judiciary has given to him. Imran turned to the judiciary, whose judges come from the same educated urban middle-class social strata from which he draws his main support. They may have silently espoused some of his ideas of accountable and clean governance responsive to public aspirations for a fair and just society. Perhaps particularly revolting to the Supreme Court justices was Nawaz Sharif’s attempt to set up dynastic politics by grooming his daughter, Maryam. In all likelihood, the jurists were influenced by the legacy of judicial activism left behind by former Chief Justice Iftikhar Chaudhry in his challenge to former Prime Minister Pervez Musharraf. The current court ended up handing down what basically amounts to more of a moral indictment than a legal verdict against Nawaz and his family.

Imran is unlikely to stand still. He will keep up the pressure on the reconstituted government. He goes by instinct and impulse and is daring. He might be tempted to build on the momentum given to him by the Supreme Court’s judgment. In the wake of the ruling, the way Imran sees himself and his movement as agents of the common man against the ruling elites is coming into sharper relief. Although he is widely suspected to have previously had the military’s backing, Imran now seems more prepared to directly confront the military. In a recent interview he contended that in power he would strengthen civilian rule and make sure that the army does not run the government.

Moreover, in calling for a basic reorientation of Pakistan’s international relations Imran seems ready to challenge the military’s tight grip on foreign policy and security policy. He proposes that Pakistan detach itself from American influence and reject all U.S. aid. And he has revived an older demand that the country pull out of a war on terrorism against fellow Muslims that he declares is being fought on behalf of the United States. Framing his rhetoric in nationalistic terms, Imran is clearly tapping into popular post 9/11 sentiments about American motives.

While Imran has not succeeded in forcing an early election, this failure may have perhaps contributed in helping to build confidence among Pakistanis in a process of change through democratic institutions rather than through mass agitation. It has demonstrated the resilience of the political system to withstand threats to stability that can easily come from the large body of disinherited and marginalized population, including confused and dispirited youth looking for desperate and extremist solutions. Imran had the backing not only of his party supporters, but also much of the urban middle-class intelligentsia. They may or may not share his overall agenda but they do subscribe to his view that corruption and lack of accountability are contrary to democratic values.

Pakistan has come a distance from the days when the army would decide that a certain civilian government should be replaced by another one. All it needed was to find a willing partner from among the political parties. Very conceivably, the military was involved in helping the court to build the case against Nawaz. But if it was involved, then it played the role of a collaborator, not as an instigator, which is less of a central actor position than in the past. Of course, it remains to be seen whether the military would be prepared to stand by and allow a mercurial, populist figure like Imran to accede to power.

Another, more immediate test for democracy looms with a decision by Nawaz to hold city demonstrations and lead a march through Punjab’s Grand Trunk Road. Anxious to prove his party’s unity and assert his ascendency within his family, and seeking political rehabilitation, Nawaz seems ready to resort to tactics familiarly associated with his political opposition. Although claiming not to seek confrontation with the country’s institutions, any disruptive demonstrations that lead to violence could seriously upset a period of normalcy, which is where the country may be headed.

Democracy in Pakistan is not mature or strong. It is faint, but it shows signs of stabilizing. And it seemed to move forward after the Supreme Court’s July 28 judgment upheld the rule of law, which demonstrated the continuing independence of the judiciary and restored public confidence in the judicial process. And that bodes well for the country. Unfortunately, normality also perpetuates the country’s dynastic politics and policy stasis just at a time when so many Pakistanis are ready for change.

Marvin G. Weinbaum is director of Afghanistan and Pakistan Studies at the Middle East Institute and Professor Emeritus at the University of Illinois in Urban-Champaign.

Touqir Hussain, a former ambassador of Pakistan and diplomatic advisor to the prime minister is an Adjunct Professor at Georgetown University.