Will Pakistan's Support for Terrorists Destroy Its Relationship with America? 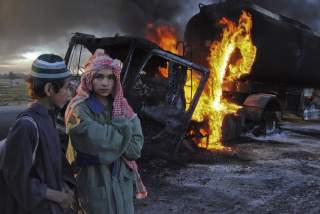 As troubled as U.S.-Pakistan relations are now, they could soon get a lot worse.

On December 3, U.S. Secretary of Defense James Mattis will visit Islamabad. It’s expected to be a short sojourn; he likely won’t be there for more than a few hours.

This isn’t particularly surprising. Neither side has been in the mood for long and warm conversations lately, and especially since August, when U.S. President Donald Trump announced a new South Asia strategy that demanded—in no uncertain terms—that Pakistan go after militants on its soil, such as the Afghan Taliban and Haqqani Network that target Americans in Afghanistan, and that called on rival India to step up its role in Afghanistan. Predictably, Islamabad was not pleased.

And yet, as troubled as U.S.-Pakistan relations are now, they could soon get a lot worse.

In the weeks that followed Trump’s announcement of the new strategy, a succession of top administration officials, including Secretary of State Rex Tillerson, traveled to Islamabad to deliver sharply worded follow-up messages to their Pakistan counterparts about the need for Pakistan to move against terrorist sanctuaries on their soil—and quickly. One can expect Mattis to convey a not-so-friendly reminder.

Speculation—fueled in some cases by U.S. officials themselves—abounded about punitive steps that the Trump administration might take if it concludes the Pakistanis aren’t addressing U.S. demands. The options included expanding drone strikes, revoking Pakistan’s non-NATO ally status, sanctioning Pakistani security officials deemed by Washington to harbor ties to terrorists, and even starting the process of designating Pakistan as a state sponsor of terror.

Today, more than three months after the announcement of the new strategy, American officials appear unconvinced that Pakistan has taken action against Afghan Taliban and Haqqani Network targets. In a briefing on November 28, Gen. John Nicholson, the commander of U.S. forces in Afghanistan, bluntly stated that “We have been very direct and very clear with the Pakistanis . . . we have not seen those changes implemented yet.”

The White House didn’t announce a specific timeframe, though it made clear that it would give Pakistan some time to address American demands. Speaking on Capitol Hill in October, Mattis said that the administration would try to work with Pakistan “one more time,” but he warned that “if our best efforts fail, the president is prepared to take whatever steps are necessary.”

Based on estimates I’ve heard from U.S. officials, the Trump administration won’t start seriously evaluating Pakistan’s activities and considering possible next steps until the first few months of next year.

This gives the relationship some breathing room—but probably not for long. Reading the tea leaves, the trend lines are not great for the U.S.-Pakistan partnership.

Several weeks ago in Islamabad, I oversaw a Track II dialogue on U.S.-Pakistan relations. I was struck by the deep divergences in our discussions, and particularly on those issues that figure particularly prominently in Trump’s South Asia strategy—such as terror groups in Pakistan that stage attacks in Afghanistan. During the dialogue, Pakistanis insisted their nation was dealing with such outfits, while the Americans—just like their government—were skeptical. On this topic, efforts to reach common ground were largely unsuccessful. If our Track II discussions couldn’t tease out any convergences on the Haqqani Network issue, then it’s hard to imagine our two governments will fare any better.

Consider as well what has happened in Pakistan just over the last ten days.

On November 24, Hafiz Saeed, the leader of the Pakistani terror group Lashkar-e-Taiba, was released from a ten-month-long house arrest. Legal authorities contended there was insufficient evidence to justify detaining him any longer. Saeed, according to India, the United States, and the UN, is a terrorist and the leader of an organization that carried out the November 2008 Mumbai terror attacks, which killed 161 people, including six Americans. Washington has long demanded Islamabad put Saeed behind bars, and it has a $10 million bounty on him. But Saeed is now a free man, and he enjoys the freedom to travel around the country and make public appearances, as he has routinely done since the 2008 attacks, barring several other brief periods of house arrest.

The timing of Saeed’s release is striking. It came just a few days before the ninth anniversary of the Mumbai attacks, and just a few days after the U.S. government delinked Lashkar-e-Taiba from aid certification requirements. This means that Washington no longer needs to certify that Pakistan is taking action against Lashkar-e-Taiba before releasing aid to the country. Why the United States made this move is unclear; perhaps it was meant as a carrot to better entice Pakistan to take action against other terror groups, like the Haqqani Network. At any rate, Washington was furious about Saeed’s release. The statement released by the White House was one of the strongest in recent memory about Pakistan’s handling of the Lashkar-e-Taiba chief: “If Pakistan does not take action to lawfully detain Saeed and charge him for his crimes, its inaction will have repercussions for bilateral relations.”

The other notable development in Pakistan in recent days was a protest of religious conservatives in Islamabad. Early in November, several thousand members of hardline Islamist political parties entered the capital and launched a sit-in on one of the capital’s major interchanges.

The protesters’ main demand was that the government fire a law minister who had changed (by mistake, Islamabad later said) the wording of an oath that electoral candidates must declare about Muhammad being the final prophet. These protesters also railed against religious minorities and lionized a Pakistani police officer who assassinated the governor of Punjab province in 2011 merely because he supported the cause of a Christian woman sentenced to death by Pakistan’s draconian blasphemy laws. Indeed, one of these protesters’ core rallying cries is “death to blasphemers.”

For more than two weeks, the sit-in dragged on. Finally, after a botched crackdown by police on November 25 led to violence, the government and military concluded an extraordinary agreement with the protesters. In effect, the deal gave a group of religious hardliners everything—including the kitchen sink. Not only was Hamid, the law minister, forced to resign, but the state also agreed to release all arrested protesters within three days; to investigate and propose legal action against those that planned the botched crackdown; and to pay for all public and private damages caused by the protest.

So, in effect, at the very moment when the United States is ramping up its demands that Islamabad crack down harder against terror, Pakistan set free a notorious terrorist and capitulated to religious extremists. True, neither Saeed nor the Islamabad protesters pose immediate threats to the United States. Still, these recent developments won’t make Washington any more confident that Pakistan is willing and able to take bigger steps in its counterterrorism and counterextremism fights—steps that go beyond the largely effective campaign it has waged against anti-state terrorists in the tribal areas of North Waziristan.

As for those entities—read: the Afghan Taliban and Haqqani Network—that do pose immediate threats to the United States from their perches in Pakistan, it’s still unclear at this point what Pakistan will do about them, and how Washington might respond if Pakistan doesn’t respond the way the United States wants it to respond. Nearly two decades of the same demand haven’t produced the desired result for Washington, so there’s very good reason to believe that history will repeat itself once again. True, the Trump administration’s threat to take harsh or tough—and in some cases unprecedented—steps may change the calculus for Pakistan and compel it to act differently this time around. But then again, Pakistan’s core national interests have long necessitated that it retain links to militants on its soil. And interests are powerful things. As the famous saying goes, there are no permanent friends or enemies, only interests.

So American demands, no matter how threatening, may prove no match for Pakistan’s immutable interests. Additionally, Washington’s willingness to use tough measures may be blunted by the realization that possible Pakistani retaliations—shutting down NATO supply routes on its soil, suspending intelligence sharing for counterterrorism—could imperil America’s own interests.

Regardless of all the uncertainty, this much is true: at some point in the coming weeks, there will be a reckoning. Washington will take stock of what Pakistan has done on the counterterrorism front and make some type of decision. The nature of that decision, and of any potential Pakistani responses, will go a long way toward determining the trajectory of the relationship.

Given the turbulent history of the U.S.-Pakistan relationship and the troubling signs of recent days, the coming reckoning could well be a painful one.

Image: School boys stand near fuel trucks which were set ablaze in the Bolan district of Pakistan's Baluchistan province December 12, 2011. Gunmen on motorcycles opened fire to nine fuel trucks in the Bolan area of southwestern Baluchistan province, setting them on fire and killing one of the drivers, police and witnesses said. REUTERS/ Amir Hussain