Will Populism Come To Russia? 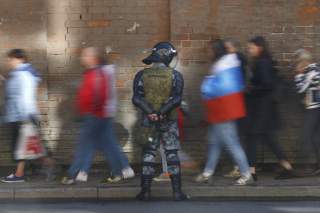 Is Russian president Vladimir Putin a populist? According to the Russian analyst Alexander Rubtsov, director of the Center for the Study of Ideological Processes, this is not the case. In an article in the Moskovskij Komsomolets he wrote:

“Rigorous theories have developed ‘necessary and sufficient’ characteristics of populism: its stance ‘for the people against the elite’, its manipulation of popular values and expectations, the emphasis on a charismatic leader, the bypassing of institutions, the difference between real choices and the propaganda media diffusing populist visions . . . In view of the absence of a whole series of such characteristics, they remove Putin from the category of populists and even see in him ‘a bastion of anti-populism’ in his internal policy (notwithstanding his scandalous relations with populism and anti-establishment movements abroad). He does not threaten his elites, does not communicate live with his followers, does not incite them to mobilize, he famously avoids debates and has no chance of losing elections. All this is not considered to be in the spirit of true populism, in fact it is rather the opposite.”

Rubtsov is right: Putin is not a populist and the reasons he gives are certainly valid. However, the most important reason is that the only movements and parties that can be labeled “populist” are those which are pursuing illiberal policies in liberal democracies, which means: within systems where there still exists the possibility of democratic alternation of power through the ballot box. This possibility does not exist in Putin’s Russia.

However, this does not mean that the Kremlin is not riding the waves of European and American populism brilliantly, using populist movements and parties to its own advantage. The anti-EU and anti-NATO stance of the majority of these parties fits perfectly with the geopolitical objectives of the Russian leadership. Its strategy is to bind these movements closer to the Kremlin by signing “cooperation agreements.” Two populist parties with which such agreements were signed, the Austrian Freedom Party and the Italian Lega Nord, recently entered the governments of their respective countries. However, populism could also be a double-edged sword. The populist wave is an international phenomenon, causing not only turmoil in Europe, but also in the United States, Latin America, Australia and Asia.

Is it reasonable to expect that only Russia will be safe from this worldwide phenomenon? Russia is no longer an isolated territory, cut off from the rest of the world, as it was in Soviet times. It is part of the world economy, its youth is educated, its middle class is travelling abroad, and—most importantly—its population is connected with the rest of the world through the Internet and social media. In Europe the anti-elite mood of the populist parties turned against mainstream governments and political parties. However, these derided governments and despised politicians came to power in mostly fair and democratic elections. In the last eighteen years in Russia the presidential and parliamentary elections have not been fair and democratic: they were rigged and manipulated, while candidates of the so-called “non-systemic” opposition were prevented from participating. If one can speak of an “elite” which is estranged from the population and which has become a separate “caste,” then this is the case in contemporary Russia. This means that probably in Russia the objective conditions for the development of a populist movement are even more ripe than elsewhere.

It would appear that the Kremlin has reached this conclusion. In April 2017 a new think tank was founded by the Presidential Administration: the “Expert Institute for Social Research.” This institute has the task of organizing forums in the different regions of the Russian Federation. One of the first activities of this new think tank was the publication of a report on populism, written by Gleb Kuznetsov and Yekaterina Sokolova. In this report the authors begin by analyzing the general causes of this phenomenon. They consider populism a product of a post–industrial society in which the old classes have disappeared to make place for “quasi-classes,” for which the left-right divide has lost its meaning. The economic crisis of 2008/2009 has played a major role in the emergence of populist parties, write the authors. They must be considered a “post-shock” phenomenon which, while emerging later, were triggered by the crisis which led to the impoverishment of the middle classes. In particular, the theme of “social justice” has become a major concern for the youngest generation, those between twenty to twenty-nine years, because in the coming ten to fifteen years the income of this group will show a tendency to decrease and they will have no certainty of reaching a satisfying standard of living after the age of thirty-five. This problematic situation is compounded by the existence of social media which enables horizontal contact among like-minded people to be made. The analysis of the two authors’ report is based on the situation in Europe and the United States.

But what about Russia? According to Izvestia, “A source from Izvestia, close to the Presidential Administration, emphasizes that there is a special, classified section of the research which is dedicated to Russia and not planned to be made public.” Apparently, the debate about populism in Russia is such a sensitive subject that the authorities want to keep it outside the public arena. It is a sign of the deep angst of the leadership about this unpredictable phenomenon.

But the authors of the report have in fact aired some interesting ideas. According to them, the populist wave will arrive six to seven years later in Russia than in Europe and the United States. They explain this time difference by the fact that Russia has been damaged less by the crisis of 2008/2009 than the West. In Russia, on the contrary, the crisis of 2014–15 was more significant, which means that the “after shock” will arrive about six years later. It is interesting that according to this narrative the arrival of the populist wave in Russia will coincide with the end of Putin’s fourth (and last) presidency in 2024.

There is also some indication of what is in the “secret” part of the report. One of the authors, Kuznetsov, told a paper that in the near future “this set of [new] technologies will necessarily be used by Russian politicians.” He was referring to the anti-corruption meetings of Alexei Navalny. “This means,” he said, “that the path we travel from the emergence of populism to its culmination will be significantly quicker than in the United States or Europe.” Kuznetsov warned: “The Kremlin is always slower than the opposition.” However, he indicated that the Kremlin has at its disposal an important instrument “for boosting populist methods”: the All-Russian Popular Front. Kuznetsov proposed that this organization, founded by Putin in 2012, would in the future serve “as the nucleus of a classical populist organization.”

However, this All-Russian Popular Front is anything but a classical populist organization. The Front was presented for the first time by Putin, on May 6, 2011, at a conference of the United Russia party in Volgograd. The idea was to bring more “diversity” into the Duma alongside United Russia. On this list, apart from United Russia could be added up to 25 percent of “outsiders”: representatives of Kremlin-friendly trade-unions, agricultural associations, veterans’ organizations and so on. At that time the Front was presented as a “modernization” of the party, which would create a new, broad coalition around the party—some kind of “silent majority” representing different ideological positions. In fact, this new All-Russian People’s Front was “a faithful copy of the “National Front” of the German Democratic Republic. In the GDR it was the only list in the elections for the Volkskammer, the East German parliament.” However, in the Duma elections of December 2011 the All-Russian Popular Front didn’t participate.

The role of the new think tank of the Presidential Administration seems to be to prevent the emergence of real populism by creating fake populism with the help of new “political technologies,” copied from populist movements, to prevent, contain, and control the emergence of populist movements in Russia. The director of the board of the think tank, Andrei Shutov, is very clear. He sees a parallel between today’s opposition and revolutionary movements at the beginning of the twentieth century. “From 1905 on,” he has said, “parties developed which did not behave themselves in the best way in February 1917. Unfortunately, today, too, in a section of the opposition parties there is no idea of a national consensus, of basic values, which are shared by society and the ruling class. In order to realize their goals they are ready to sacrifice the government [and] the national interest. In their time that was what the Bolsheviks did. Look, in a section of today’s opposition there are analogous ideas . . . If you read about the tactics, on political behavior in 1917 and compare that with Navalny’s position today, then you find very many related similarities. However, in 1917 power [of the state] was weak, it was very much up for grabs, today, thank god, the state is powerful, powerful particularly thanks to the leadership of Vladimir Putin.”