Will President Trump End the 'Total Disaster' War in Afghanistan? 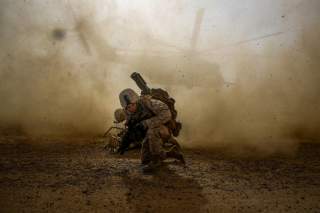 The Afghan war, now in its sixteenth year, has arguably become one of the world's most consequential conflicts. The steady stream of news from Afghanistan is as relentless as it is depressing. More important, the eerie silence in Washington, DC to discuss the future course of Afghan conflict—and America’s role in it—is deafening. President Donald Trump, now the third U.S. president to lead the Afghan mission, has called the war a “total disaster,” which the United States should abandon altogether. Trump, who has claimed to have a foolproof plan to defeat the Islamic State, has not yet discussed his strategy for fighting America’s longest war. The silence, however, does not qualify as an improvement from the policy of the Obama administration, whose excessive caution while dealing with Afghanistan and arbitrary deadlines for withdrawal of U.S. troops made the Afghan campaign more challenging.

Nonetheless, the stakes are high for the United States. For one, the security conditions have exacerbated, and the emboldened Taliban now controls more territory in Afghanistan than any time since 2001. Pakistan, who is in cahoots with the Taliban, continues to provide the group with extensive sanctuaries and support network on its territory. At the same time, the Islamic State has made significant inroads into Afghanistan and has carved out a footprint in eastern parts of the country. Meanwhile, the Afghan National Defense and Security Forces, who are boldly fighting the insurgency, have endured an alarming number of causalities and have suffered a 2.4 percent attrition rate every month. Civilian casualties have hit a record high with 3,498 deaths and 7,920 injured in 2016 alone, with a ten-fold increase in losses caused by the Islamic State. Additionally, the influx of returning Afghan refugees from Pakistan and Europe, and over 600,000 people internally displaced by rising insecurity, have created a humanitarian crisis. Last year, the UN reported that one-third of Afghans (9.3 million) needed immediate assistance. Moreover, regional countries have engaged in unhelpful machinations to deepen their ties with armed groups that undermine American and Afghan interests. Among them Iran and Russia have extended their support to the Taliban, including sharing intelligence with the group, to contain the growing threat of the Islamic State. Unfortunately, these grim realities, coupled with an absence of a coherent U.S. strategy to address the terror group, have sown anxiety among U.S. allies and partners.

More vitally, Washington’s continued silence is dangerous. Earlier this month, Gen. John Nicholson, the U.S. commander in Afghanistan, told Congress in his testimony that the Afghan war is at “stalemate.” However, Trump has a better chance of success in Afghanistan than his predecessor, Barack Obama, a hesitant warrior who focused less on winning the war and more on not losing it. In the course, however, Washington was repeatedly reminded that the Afghan mission was broader than initially anticipated, but little was done to adjust accordingly. More crucially, by any measure, U.S. and coalition forces have won every major battle with the Taliban and other militants, but these tactical feats have not yet led to a decisive victory. This is mainly because the Taliban are free to retreat, train and regroup in sanctuaries inside Pakistan. Pakistan’s duplicity is arguably the greatest contributor to international failure to achieve stability in Afghanistan.

In his testimony, Nicholson told Congress that “it is very difficult to succeed on the battlefield when your enemy enjoys external support and safe haven,” and called for a “holistic review” of U.S. relations with Pakistan. Pakistan has repeatedly shown through its actions that any chaos it can manage in Afghanistan is better than a noncompliant regime in Kabul. In the past, concerns about Pakistan’s sincerity have even prompted suggestions that the United States engage in unilateral action against militants inside Pakistan. Pakistan uses “good” militants as proxies not only because they are expendable and low-cost compared to deploying military forces, but also because it offers Pakistan a plausible deniability.

More significantly, Pakistan has bolstered Taliban’s two-pronged approach in Afghanistan: to stoke fear by inflicting maximum damage and to undermine the Afghan government by temporarily seizing key provincial districts across the country. In doing so, Taliban has targeted district governors, police chiefs and provincial leaders. Meanwhile, the Taliban’s leadership council, or the Quetta Shura, has been steadily moved from the city of Quetta in Baluchistan province to the northeastern city of Peshawar. Key Taliban leaders are reportedly hosted by Pakistan army officials in military garrisons in Peshawar. More vitally, the Taliban’s has gradually moved from their guerrilla hit-and-run tactics into more conventional military methods in the battlefield. Among the group’s new tactics are conducting large-scale coordinated raids and sabotage activities, such as planting land mines and IEDs across major roadways to block the mobility of Afghan forces and starve them for resources.

Furthermore, Taliban fighters reportedly have access to advanced weaponry, including night-vision goggles, sniper rifles, sophisticated communication equipment and drones for reconnaissance and propaganda purposes. Additionally, the group has significantly improved its human and open-source intelligence gathering capabilities, including operating robust informant networks, which collect and disseminate information in a decentralized structure. Access to these resources and the change in battleground tactics exceeds beyond the Taliban’s traditional capabilities and suggests that it is propped up by a support network.

That said, Washington should devise and coalesce around a new Afghan strategy that sets clear, realistic and achievable goals for success in Afghanistan. The new approach needs to be locally tailored, regional in scope and acknowledge the reality that Afghan stability is intrinsically linked to Pakistan’s sincere cooperation. Consequently, Washington should pursue a policy of realpolitik with Pakistan, by clarifying whether Pakistan is an imperfect friend or a clever adversary. Additionally, Washington should avoid the temptation to send more U.S. troops, as asked by Nicholson in his testimony, and instead heed additional deployment under a new Afghan strategy.

Furthermore, the Trump administration should take two additional actions to support its new Afghan strategy. First, speedily appoint and actively support a serious U.S. ambassador and a special presidential envoy. The two envoys should be tasked to make deals, reach political compromises, and relay tough messages to regional players. Second, address the dangerous weakness in the offensive capabilities of the Afghan security forces. The United States should specifically focus on expanding the special forces contingent, building the air force and buttressing the Afghan intelligence units—a cost-effective bargain compared to sending more U.S. troops. Doing so would serve as a force multiplier and would help to reduce the reliance of Afghan National Defense and Security Forces on American and coalition air power.

In the meantime, Washington should not expect the Taliban—or Pakistan—to sue for peace. Despite infighting in the insurgency, Taliban commanders and shadow governors are actively expanding their turf. The optics of finding an intermediary who can speak with authority for the Taliban and broker peace are moot. Similarly, without a sustained effort to pressure Pakistan to deny Taliban sanctuaries, no additional troops or funds will achieve victory in Afghanistan. By any measure, Pakistan’s subversive power play in Afghanistan has been unsuccessful, without improving its strategic position. Instead, it has alienated Pakistan from potential friends in Kabul and Washington.

Nonetheless, success is achievable in Afghanistan, but there will be no quick and total victory. A change in U.S. strategy is overdue, and how Trump decides to proceed in Afghanistan will be among his most difficult tests. The Afghan war transcends beyond its border and cannot be resolved in a single country context. Washington should review the broader scope of its tumultuous relationship with Pakistan and make clear at what point does Pakistan overreach. However, continued silence in Washington will not make the Afghan war go away.

Javid Ahmad, a non-resident fellow at the Atlantic Council and at West Point’s Modern War Institute, is a senior intelligence manager at iJET International. The views expressed here are his own. On Twitter: @ahmadjavid.