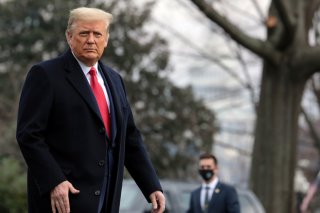 President Donald Trump has flirted the notion of a 2024 presidential bid in recent weeks, but sources say that he’ll withdraw from the running if he forecasts another brutal election defeat.

Amid a chaotic ending to his presidency as coronavirus cases and hospitalizations surge to unseen figures and as Congress fails to strike a deal on another stimulus package, Trump has reportedly spent days calling allies for advice over how to “stay part of the conversation” for the next two years, sources told POLITICO. Although the president has hinted to supporters that “I’ll see you in four years” for another White House run, Trump noted to allies on the calls that he’ll back out in two years if he foresees the possibility of losing again, the sources said.

In discussions with allies, Trump specifically asked for guidance on campaigning during presumptive President-elect Joe Biden’s presidency and how to maneuver the next two years. The president has speculated heading to the Middle East, according to sources familiar with the calls, to champion his policies and work that his administration did, including regularizing relations between Israel and Arab nations.

Trump is set to boost his candidacy right after Biden takes office, likely using his baseless claims of voter fraud as the centerpiece for his presidential run, an illegitimate message that would tarnish his own reputation and that of the GOP.

“Donald Trump was a historically unpopular and divisive president who was impeached, bungled a global pandemic that costs hundreds of thousands of lives and was constantly plagued by scandal,” Anthony Fowler, a public policy professor at the University of Chicago, said. “In 2020, he notably underperformed relative to other Republicans running in the same states. Furthermore, his attempts to undermine the credibility of our elections have likely weakened American democracy and the Republican Party.”

Fowler added that a Trump GOP primary win in four years would “further damage America and the Republican Party.”

The president reportedly called Fox News host Sean Hannity, former White House communications director Bill Shine, allies Corey Lewandowski and David Bossie and former U.S. Ambassador to Germany Ric Grenell for advice, all of which aren’t discouraging him to toss his candidacy, according to POLITICO. Some allies have pushed him to formally launch his run on Inauguration Day—like he did in 2017—while others suggested to wait a few months before announcing it.

A 2024 presidential run for Trump would also block the Republican party from evolving, experts say, as it would meddle the fresh urgency for a new round of GOP candidates to enter the presidential playing field. His bid would take fundraising money away from his competitors who may have a stronger chance at securing the party’s nomination, as Trump’s candidacy could be “irrelevant” come election season due to his swamped attempt in 2020.

“Most of the national-level politicians in the Republican Party have a strong interest in nominating somebody other than Trump in 2024,” Christian Fong, assistant professor of political science at the University of Michigan, said. “Those who oppose the direction in which Trump tried to lead obviously don't want to see him come back, and many of those who followed along are more interested in winning the White House for themselves rather than bringing Trump back.”

The Republican party split during Trump’s White House term, as some support his ideology, while more moderate members of the GOP have attempted to separate themselves from the president.

Several candidates have emerged into the political spotlight to take the reigns of the GOP in a post-Trump era, including Vice President Mike Pence, Secretary of State Mike Pompeo and former United Nations Ambassador Nikki Haley.

If the president is serious about running again in four years, University of Michigan Political Science Professor Jenna Bednar said, then “he needs to maintain control of the Republican Party now.” Otherwise, “the Republican Party leadership has a strategic choice and that will depend on how Biden runs his administration.”

Bednar noted the GOP’s presidential choice will depend on how Biden operates in the Oval Office and said that if the president-elect maintains a policy agenda with “broad appeal” on both sides of the aisle, then “Moderate Republicans might prefer a candidate who can compete against a successful Biden, one who is steady and can accomplish the party's goals,” which wouldn’t be Trump.

“If, on the other hand, Biden pursues policies targeted toward minorities without including policies that benefit the general public, then Trump might be just the right candidate, one who can run on anger and resentment,” Bednar added.

Over the last four years, Trump has built a strong base of MAGA supporters, along with loyal allies on Capitol Hill that have backed his voter fraud allegations from the 2020 presidential election. With this spreading support, Fowler said he “can't say I'd be shocked if Trump emerged as the Republican nominee in 2024.” The expert “underestimated Trump in the past,” as he thought Trump had little chance of winning the 2016 Republican primary and general election.

“During his presidency, I assumed that other Republican leaders would not tolerate his corruption and incompetence as much as they did. And even now that he has clearly lost the 2020 election, many Republican voters and elected officials still stand by him and undermine the integrity of our democracy,” Fowler said. “So I can't say I'd be shocked if Trump emerged as the Republican nominee in 2024, but I think this would harm America and the Republican Party.”

Grover Cleveland is the only president to successfully win a non-consecutive White House term, though a number of other commander-in-chiefs have attempted the same pursuit.