Will Putin Really Return To The Kremlin in 2024? 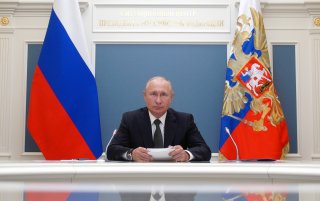 President Vladimir Putin now has the legal right to remain in power until 2036, after a large majority of Russians voted in favor of Kremlin-backed constitutional reforms.

During a week-long national referendum, Russians voted on a package of constitutional amendments that included a provision to reset Putin’s term limits, which would allow the Russian president to serve two more six-year terms after his current one expires in 2024. Putin has served almost continuously as Russia’s president since 2000, with the exception of the period from 2008 to 2012, when he served as prime minister under his hand-picked successor Dmitry Medvedev.

Other prominent amendments included a ban on senior officials holding foreign citizenship, a prohibition against “expropriation” of Russian territory, and a provision defining marriage as being between a man and a woman. The new constitution also enshrined ‘social rights’ such as guarantees that minimum wages will exceed subsistence minimum income and that pensions will be adjusted for inflation.

Russia’s Central Election Commission announced on Thursday that 77.9 percent of voters had supported the proposed amendments, while 21.3 percent had opposed them. Voter turnout for the referendum was reported at 65 percent.

Following the Kremlin’s victory, all eyes are on Putin’s political future. Although Putin now has the legal right to run for an additional two terms, some Russian political insiders and experts are not entirely convinced that he will opt to do so.

Alexey Chesnakov, a political analyst who previously served as a Kremlin aide, told the National Interest that Putin’s future plans remain far from clear, and that is likely the way the Russian president would like to keep them.

“The Chinese have a concept known as ‘dragon in the fog’: a strong player in an incomprehensible space who can strike at his competitors at any moment from an unexpected angle,” Chesnakov said. “This image does a good job of explaining the logic behind Putin’s behavior: He wants to remain a ‘dragon in the fog’ until the end of his presidency.”

Chesnakov explained that Putin does not want the Russian political elite to spend the next several years attempting to curry favor with possible successors instead of “working for stability.” Keeping the possibility of another run in 2024 open would help thwart such maneuvering. Resetting the presidential terms would also, Chesnakov argued, send a signal to foreign leaders that Putin feels confident about his ability to remain at Russia’s helm for at least the next decade.

But there is another possible reason behind Putin’s decision to push for a new constitution: a desire to secure his legacy.

“If this decision is viewed strategically, Putin undoubtedly wanted not only to give himself an opportunity to run again, but also to make changes that would fixate his ideological and political discourse into the Russian political system,” Chesnakov said.

If Putin does decide to return to the Kremlin in 2024, he will be able to exercise even greater power as president. The constitutional amendments adopted on Thursday strengthened the president’s influence over the judiciary. For example, the president no longer needs to seek approval from the Federation Council, the upper house of Russia’s parliament, in appointing or dismissing the Prosecutor General. The president also now has the ability to propose that the Federation Council dismiss senior judges, whereas under the old constitution, only fellow judges could make that recommendation.

The parliament has also gained new powers. The State Duma, the lower house of Russia’s parliament, now has the ability to confirm or reject nominees for prime minister and other key cabinet positions. Some political experts, however, argue that these changes are not so significant in practice.

“If we look at the substance of these reforms, then the presidency becomes the dominant institution, whereas the new powers granted to parliament are non-critical, peripheral, and in the big picture do not provide it with any leverage,” said Tatyana Stanovaya, founder of political analysis firm R Politik.

Stanovaya noted that in the case of the State Duma approving cabinet ministers, if the lower house fails to confirm the government’s candidates three times, then the president under the new constitution has the right to appoint them himself.

The referendum was originally scheduled for April 22, but the coronavirus pandemic forced the Kremlin to delay the vote. Although Russia initially succeeded in containing the spread of the disease, it later emerged as a global coronavirus hotspot, with 661,165 confirmed infections as of Thursday, according to a real-time database from Johns Hopkins University.

Coronavirus has likewise delivered a blow to Russia’s economic prospects. Alexei Kudrin, chairman of Russia’s Accounts Chamber, has warned that the number of unemployed Russians could triple by the end of this year, from 2.5 million to 8 million.

The combination of pandemic and economic troubles dampened Putin’s popularity ahead of the referendum. In April, Putin’s approval rating dropped to 59 percent, his lowest rating since 1999, according to polling reported by the independent Levada Center. The Russian president’s approval ratings have been steadily declining over the past several years due to mounting economic disillusionment.

Yet even against this background, the opposition failed to generate any significant momentum against the Kremlin’s proposed constitutional reforms. Even though the proposal to reset Putin’s term generated controversy, the new constitution’s new social guarantees enjoyed broad support among the Russian public. No less significantly, the opposition never managed to form a coherent strategy for opposing the new amendments.

“We see that the pro-government camp had a single strategy: to go out to vote for the amendments,” said Denis Volkov, deputy director of the Levada Center. “Among opposition camps, however, some argued for a strict boycott of the referendum, others advocated voting against the new constitution, and others still proposed an alternative package of amendments. This total fragmentation among the opposition allowed the system to achieve the needed result.”

Dimitri Alexander Simes is a contributor to The National Interest.