Will Russia Be the Real Loser in the New U.S.-China Cold War? 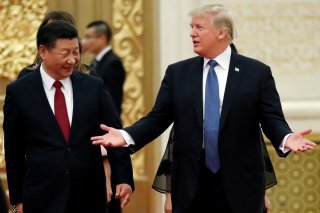 China found itself in the international wilderness after its suppression of the 1989 Tiananmen Square student protests. The violent crackdown elicited widespread condemnation from the West and, shortly thereafter, the United States and the European Union imposed an arms embargo on China that remains in place to this day.

In the subsequent years, Beijing found an unexpected partner in post-communist Russia. The collapse of the Soviet Union had financially devastated the Russian arms industry, making it very eager to do business with an economically-ascendant China. Over the following decade, China bought up Russian fighter jets and missile systems as part of its quest for military modernization, emerging as Russia’s largest arms customer in the process.

More than thirty years later, a new crisis could once again bring China and Russia closer together. An outbreak of a novel strain of coronavirus in the Chinese industrial center of Wuhan has over the past few months spiraled into a global pandemic and economic depression, inciting an international backlash against China along the way.

Amidst the recent turbulence, Russia was among the few nations that sided with China against its critics. With the current global health crisis taking an increasingly geopolitical turn, Moscow and Beijing are looking to each other for support.

The coronavirus pandemic has battered China’s global image in recent months, as well as its business interests overseas. The United States has led the charge against Beijing, with the Trump administration blaming China for the outbreak and a growing number of Republican senators threatening to adopt punitive legislation against the People’s Republic. Numerous European governments have accused China of seeking to exploit the crisis for political gain and of sending them faulty testing equipment.

Even several of China’s close African partners have lashed out at Beijing for reportedly discriminating against their citizens as part of its public health restrictions.

Several key Asian economic heavyweights, on the other hand, have moved to lessen their reliance on China. Japan announced earlier this month that it would offer financial incentives for domestic companies to move their production in China back home. India introduced new restrictions on foreign investment to prevent “opportunistic takeovers” of its companies by Chinese buyers.

In this context, Russia has emerged as one of China’s few and most vocal defenders on the global stage. Russian foreign minister Sergei Lavrov denounced calls for China to pay compensation for damages caused by the coronavirus pandemic as “unacceptable” and shocking. “My hair stands on end when I hear such things," Russia’s top diplomat stated.

Russian president Vladimir Putin likewise slammed criticism that China did not act quickly enough to contain the pandemic as “counterproductive” during a phone call with Chinese President Xi Jinping on April 16. But the Russian leader went even a step further, praising “the consistent and effective actions” taken by the Chinese authorities in combating the virus and declaring that the crisis served as “further evidence of the special nature of the Russian-Chinese comprehensive strategic partnership.”

Moreover, whereas other countries have recently cut economic ties with Beijing, Moscow has moved to strengthen them. On Wednesday, the Kremlin announced that it was granting permission for the Russian National Welfare Fund to begin investing in the Chinese yuan and Chinese state bonds.

The Russian government is also eyeing new major projects with China once the pandemic subsides, including a new gas pipeline to China and an ambitious new railway that would connect the ports of the Arctic and India Oceans.

For its part, Beijing has moved to buy up more Russian oil as global prices plummet. China’s imports of Russian crude oil in March increased by 31 percent from a year earlier, Reuters reported. These growing oil purchases from China have helped Russian oil companies stay afloat amidst falling demand in Europe due to coronavirus.

Russia’s interest in closer relations with China is nothing new. Since 2014, Moscow has actively courted Beijing to help offset pressure from the West. What the pandemic has done, however, is further convince Russia that China is the future, said Alexey Maslov, director of the Institute of Far Eastern Studies at the Russian Academy of Sciences.

“China is viewed as a country that has not only defeated coronavirus, but is also successfully overcoming economic hardships” he said. “Furthermore, many are expecting China to begin actively expanding its influence and promoting a new geopolitical model once it deals with its internal challenges.”

Maslov contended that China would need a great-power partner like Russia to help it achieve its global ambitions post-coronavirus, especially amidst growing pushback from the United States. He told the National Interest that Moscow could, in turn, use this leverage to gain Beijing’s support for its geopolitical initiatives.

China is also exploring greater cooperation with Russia. Should relations with Washington continue to deteriorate, Beijing will put an even greater emphasis on developing economic ties with Moscow, predicted Xin Zhang, an expert on Chinese-Russian relations at the East China Normal University in Shanghai.

“If decoupling [between the United States and China] becomes a reality instead of just a buzzword at the negotiating table, then China will look to Russia and Eurasia as potential destinations for restructuring its industrial production chains,” he said.

Xin noted that one particular area where Russia and China are likely to speed up their cooperation post-coronavirus is de-dollarization. The two countries have over the past few years taken some initial steps to lessen their reliance on the U.S. dollar but Beijing’s low interest in the process has considerably slowed down progress. Growing tensions with the United States would change that, Xin said.

Some in Moscow, however, are worried that Russia could end up a loser in a new U.S.-China cold war. Although Russia has previously benefited from increased tensions between Washington and Beijing, recent developments threaten to go too far, warned Dmitry Suslov, a professor of international relations at the National Research University Higher School of Economics in Moscow.

“A continued intensification of the U.S.-Chinese confrontation presents Russia with serious challenges because the more serious this showdown becomes, the more pressure there will be on Russia to pick a side, something that it does not want to do,” he said.

Suslov added that China’s increasingly assertive foreign policy was another source of concern for Moscow. In the midst of the coronavirus pandemic, Beijing has adopted a new brand of “wolf-warrior diplomacy,” an approach that has led to numerous Chinese ambassadors becoming involved in high-profile spats with their host nations.

“To many Russian observers, it appears that coronavirus has destroyed yet another political-psychological constraint on China's foreign policy—one which had prevented China from promoting itself as a model for others and asserting itself as a global leader,” Suslov said.

Over the past decade, Russia and China have both called for a “principle of noninterference” in the internal affairs of others. Indeed, their common aversion to U.S. global democracy promotion efforts has served as a key rallying point for the two countries. Suslov, however, warned that an emboldened China could eventually demand that Russia follow its example.

Russia has so far watched China’s battle against coronavirus with admiration. Could too much triumphalism by Beijing threaten to turn these warm feelings into resentment?