Will Sisi Squander His Chance to Fix Egypt's Economy? 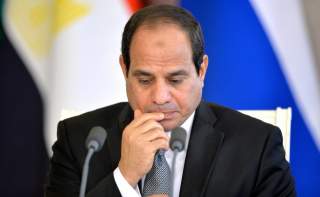 Ever since Saudi King Salman’s early April visit to Cairo, Egypt’s President Abdel Fattah el-Sisi has been in damage control mode, trying to contain a crisis sparked by two nearly simultaneous announcements: that Egypt would be transferring sovereignty of two Red Sea islands to Saudi Arabia, and that Riyadh would be providing an enormous economic aid package to Cairo. This news—coupled with reports that King Salman had showered senior Egyptian officials and parliamentarians with Rolexes—led many to conclude that Sisi had “sold” the islands.

The optics were awful, and catalyzed Cairo’s largest demonstrations in years, with thousands once again calling to topple the regime. Amidst the intense focus on the islands, however, the significance of the Saudi grant has largely been overlooked. Absent the $22 billion in Saudi aid, Egypt was seemingly on a glide path to economic collapse.

Egypt has long faced economic challenges, but over the past two years—since Sisi took power in a military coup—the situation has markedly deteriorated, precipitated by declining tourism and Suez Canal revenues, as well as a persistent Islamist insurgency led by ISIS. With foreign reserves dwindling to dangerous levels, a staggering 9 percent annual inflation rate, over 13 percent unemployment and an annual budget deficit of about 12 percent, Cairo’s finances, the Sisi administration’s durability and Egypt’s stability were all increasingly at risk.

While he has made concerted efforts to encourage foreign direct investment, Sisi has not tackled Egypt’s core structural economic problems, chief among them the military’s oversized role in the financial system—the army controls an estimated 30 percent of the economy—and food and energy subsidies, which account for nearly 20 percent of the annual budget. These subsidies, along with salaries for the seven million employees in the state’s bloated bureaucracy, and debt servicing, equate to 80 percent of annual government spending.

Complicating matters, a new baby is born about every nineteen seconds, constituting an annual growth rate of 2.6 percent, which means that Egypt’s population is poised to double to 180 million by 2050. Already, nearly half of Egyptians subsist on less than $2 per day.

The situation is so bad that even in Egypt, where denial is a perennial hallmark of the government, this past March Prime Minister Sherif Ismail was compelled to issue a dour 205-page policy statement on the state of the economy.

Even as popular anger about the islands persists, Saudi Arabia’s latest largesse could enable Sisi’s Egypt to reverse the current trajectory. The aid package consists of $20 billion to underwrite Egypt’s purchase of Saudi petroleum projects, as well as some funding to expand power generation capacity, and $1.5 billion to jumpstart some economic development in the Sinai Peninsula, where the ISIS insurgency has taken root.

This funding, which covers the next five years, couldn’t have come at a better time. In 2015, an Italian firm discovered an estimated three hundred trillion cubic feet of natural gas one hundred miles off Egyptian shores. The find, which is worth as much as $100 billion and will come online in two or three years, represents a potential boon to Egypt’s economy. Until this natural gas starts flowing, Riyadh’s grant will provide a critical cushion, helping Cairo to bridge its substantial and increasing funding gaps.

More important, this Saudi funding represents an opportunity for Sisi to finally undertake serious structural reforms, including increasing taxes on Egypt’s wealthiest, who currently pay a marginal rate of just 22.5 percent, phasing in value-added and capital-gains taxes, reducing public-sector wages, and streamlining regulations to improve the business and investment environment. The government says it will also better ration energy subsidies to the poor, cutting these expenditures by 43 percent next year. The tax increases and energy-subsidy reductions, while onerous, will allow Cairo to raise food subsidies for the legions of impoverished suffering under high inflation, while at the same time lowering the crippling deficit.

Regrettably, it’s unclear that Egypt will capitalize on this opportunity. Implementing these measures will require political capital, which in the aftermath of the island-transfer scandal is in short supply for Sisi. The last time when Sisi was flush with cash—Saudi Arabia, the UAE and Kuwait gave Egypt $20 billion in 2013—instead of making difficult decisions, Cairo muddled through, squandering the windfall and the chance for real and enduring change.

Washington and the International Monetary Fund, which in the coming weeks is poised to loan billions to Egypt, shouldn’t let Sisi miss yet another opportunity. Cairo has a history of deferring economic reforms, but the window may be closing. At a minimum, Saudi Arabia’s increasingly precarious economic situation means that two years from now, Egypt cannot count on another megagrant.

Despite Sisi’s currently diminished stature, the erstwhile general demonstrated—by improving the consistency and capacity of Egypt’s electricity grid in 2015 prior to the onset of the sweltering summer—that he is capable, when focused and committed, of implementing complex policies and delivering some positive change. While the controversy over the islands may eventually dissipate, Egypt’s economic crisis will not subside unless and until Cairo embraces reform.

David Schenker is director of the Program on Arab Politics at the Washington Institute for Near East Policy.