Will the Fed's Predictions for the American Economy Come True? 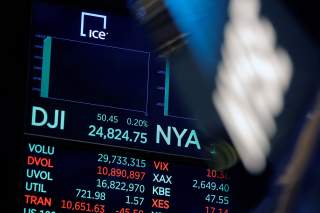 At its final meeting of the Yellen era, the Federal Reserve raised rates. But that doesn't really matter. Everyone expected the Fed to raise interest rates, and it delivered. What made people nervous was future moves by the Fed. Specifically, how would the Fed react to tax reform? And the Fed answered by suggesting it would not attempt to counteract it.

The Fed’s willingness to avoid counteracting the potential economic tailwind from Trumponomics is an important step in understanding the dynamics of 2018. With a tax reform package, the U.S. economy could accelerate in 2018. That is quite the statement given that the U.S. economy is nearing a decade long expansion.

One of the more pressing questions heading into the Fed meeting this week was how the Fed would react to this possibility. There were two possibilities. First, the Fed could see tax reform and coming too late in the cycle, the potential for overheating the economy, and therefore hint at an accelerated path of tightening to counter it. Alternatively, it could sit back and take the inflation and growth as a welcome reprieve from the past few years.

The answer was clear: take the inflation and growth from the tax reform, interfering little. Taking this route made sense for the Fed. It was already guiding markets toward three hikes in 2018, and the market already has two priced in. Without imminent tax reform, three was likely to be overly aggressive. But with tax reform highly likely to be passed, sticking to its previous guidance was not shock to the system.

With "most" of the participants accounting for tax reform in their projections for growth and inflation, the Fed raised estimates for growth in 2018 by 0.4 percent, but the estimate for inflation remained flat. This “growth without the inflation” prediction is one of the more interesting takeaways. The Fed’s mandate revolves around full employment and a stable price level. With the unemployment rate a 4.1 percent, the critical piece of the puzzle now is inflation. Even with the tax reform kicker, the Fed does not see accelerating inflation pressures, and therefore there is no reason to accelerate interest rate hikes. It is not a difficult calculus.

To a degree, this view of a growth surge without additional inflation pressure is unrealistic. It goes against many of the orthodox economic lessons and theories. Then again, those do not always play well in the real world, and there are reasons to believe that growth without much inflation could be the case. After all, wage pressures remain lackluster, and the latest Consumer Price Index report showed nascent weakness in services pricing. Services (less energy) have been the sole driver of inflation over the past several years. Maybe the Fed's projection on inflation may be more realistic than it appears on the surface.

To its credit, the Federal Reserve is not alone. While announcing no change to its policy stance, the European Central Bank (ECB) did a victory lap of sorts at its latest meeting. They too expect inflation pressures to be modest and upgraded their growth forecasts. Further, ECB President Draghi made clear that its monetary policy would remain loose for the foreseeable future, EU has much farther to go in its recovery, and that the ECB would only slowly withdraw policy stimulus when the time was correct.

The result of the announcement of the Fed and ECB was a sigh of relief. An overreaction by the Fed to the possibility of inflation pressures was a major risk to the current economic expansion. By suggesting that it is willing to allow inflation to pick-up before accelerating its tightening, the Fed is giving the global economy room to run in 2018.

For its part, the ECB is not leaving the party early either. Instead, Draghi made it clear that the United States and Europe were at different points in their recoveries with Europe having much further to go. For the ECB, the question becomes when to stop pouring gasoline on the fire. Ben Bernanke began to scale back quantitative easing nearly four years ago.

The Fed and ECB could not have been clearer about their willingness to keep this expansion going. All in, the central banks told markets to "have your growth, and don’t worry about the tightening." There are few things more bullish for markets than stimulative fiscal and monetary policy. In 2018, markets get both.