Will the Kurdish Quest for Independence Survive Regional Politics? 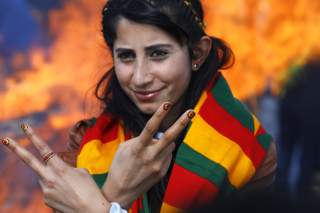 The Kurds of northern Iraq have endorsed the idea of an independent state by a 92.7 percent vote in a referendum held on September 25. This was a foregone conclusion and even the margin was not surprising. But, it has still set the cat among the pigeons because the vote for independence, although nonbinding, has come in the teeth of virulent opposition from all of KRG’s neighbors—Iraq, Turkey, Iran, Syria—with sizable Kurdish populations as well as from the United States and Russia. This means the KRG is isolated both within its own region and from the major powers, especially from the United States, which has provided to it the majority of its support since Saddam’s invasion of Kuwait in 1990.

It is not difficult to fathom the ostensible reason why the referendum was held as well as its outcome. The Kurds have been waiting patiently for their state, which the Treaty of Sevres (1920) had promised a century ago. The Treaty of Lausanne (1923) at the conclusion of the Turkish War of Independence not only denied the Kurds a state of their own but also provided international legitimacy to the division of the Kurdish population, now numbering approximately thirty million, among Turkey, Iraq, Syria and Iran.

Turkey, which is home to about a third of the total Kurdish population, has been in the throes of a Kurdish secessionist war since 1984. After a brief lull during the last decade this conflict has picked up steam again during the past two years. This was the result of President Erdogan adopting a hard line vis-à-vis the Kurdish issue in order to gain support from ultra-nationalist Turks to consolidate his power by bringing about changes to the Turkish constitution.

Paradoxically, since the 1990s Turkey has been the primary lifeline for the KRG involved in providing goods and services, primarily in the construction sector, to the land-locked entity. Above all, it has been the conduit for the export of oil through a Turkish-controlled pipeline from the KRG—often in defiance of Baghdad’s wishes. The referendum, and its potential impact on the aspiration of Turkey’s Kurds, has angered Ankara to the extent that it has announced that Turkey will from now on deal exclusively with the Iraqi government in connection with the export of crude oil from northern Iraq, thus threatening to cut off KRG’s access to the Turkish pipeline. KRG exports about six hundred thousand barrels of crude oil a day through Turkey. KRG’s economic dependence on Turkey provides Ankara a great deal of economic leverage with Erbil, which it will likely try to exercise over the coming days.

KRG technically forms a part of Iraq, so the country is the most politically affected by the outcome of the referendum, which threatens to begin unravelling a state already in a fragile condition due to the Sunni-Shia divide and the Islamic State’s continuing control of territory within Iraq. The problem has become more complicated because the KRG decided to hold the referendum not only within the delineated areas of the Kurdish entity but beyond its borders in contiguous Kurdish-controlled territories that it captured when the Iraqi army retreated in the face of the Islamic State’s assault in 2014.

The city of Kirkuk and its environs lie at the heart of this problem because Kirkuk is an ethnically mixed city and because the region is flush with oil, which Baghdad controlled until it was captured by the Kurdish Peshmerga. KRG has refused to give up control of Kirkuk because it considers it to be the heart of Kurdish territory. It also will not give up the oil it has claimed in the region. While Baghdad seems willing to treat the referendum, especially since it is nonbinding, as the KRG’s bargaining chip to persuade the central government to concede to some of its economic and political demands, it is absolutely unwilling to accept KRG’s permanent control of Kirkuk and its oil which is what the referendum signals.

Baghdad has threatened to go to war on this issue and closed Iraqi airspace to flights to and from the KRG. Whether Iraq can spare the forces to take on the Peshmerga in Kirkuk is another issue especially since it is engaged in fighting the Islamic State with American support to drive it out of the remaining Iraqi territory it controls. However, the Iranian-trained and supported Shia militia also engaged in the fight against the Islamic State take their orders from Tehran rather than Baghdad. Iraq’s Popular Mobilization Forces, the collective name for the Shia militia, have announced they will not accept Kurdish independence from Iraq. Popular Mobilization Forces leaders have particularly warned that the province of Kirkuk is likely to be the flashpoint between their forces and the Kurdish Peshmerga in the near future.

The Popular Mobilization Forces position mirrors that of Iran, which has also banned all flights to and from KRG transiting its airspace. Iran is committed to the territorial integrity of Iraq and particularly does not want the Shia-dominated central government to lose control of Kirkuk and its oil. It is likely to back up the Shia militia by supplying them arms if they decide to take on the Peshmerga in the mixed city of Kirkuk and elsewhere. Tehran is particularly disappointed that the KRG’s second-largest party, the PUK, which is in control of the eastern portion of the Kurdish enclave, including the city of Sulaimaniya, did not do enough to temper the outcome of the referendum. The PUK has maintained strong ties with Tehran, which has supported the Talabanis who control the PUK in their tussle for power with the Barzanis. And the Barzanis control the KDP that rules over Erbil and the central and western part of KRG.

Why then did President Barzani hold the referendum in the midst of such a hostile regional environment in which one wrong step might lead to a shooting war that is likely to add to the mayhem already raging in the Middle East? The answer most probably lies in the domestic situation in the KRG where the government has become very unpopular because of its corrupt and autocratic behavior. Elections to the KRG parliament have not been held for years and that August body meets only infrequently. There is an informal understanding between the KDP and the PUK (read the Barzani and Talabani clans) to divide up the loaves and fishes and rule unimpeded within their respective regions of influence. This has led to intensifying opposition against the KRG authorities and against both the major parties.

It appears that the existing leadership of the KRG decided to hold the referendum in order to divert the attention of their populace, especially the disaffected youth, from their shortcomings. One wonders if this diversionary tactic is worth the risk of another major conflagration that it may ignite in the volatile Middle East.

Image: A woman shows off her nails after being painted with the colours of the flag of Kurdistan Workers Party (PKK) during a gathering celebrating Newroz, which marks the arrival of spring and the new year, in the border town of Suruc, Sanliurfa province March 17, 2015. REUTERS/Umit Bektas