Will the Kurds Get Their Independence Referendum? 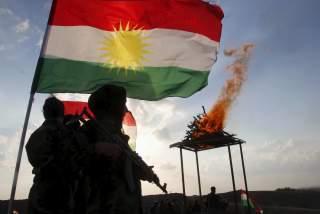 Kurdistan Regional Government president Masoud Barzani announced on June 7 that the region had set September 25 as the date for a referendum on independence. He was joined by members of the Kurdistan Democratic Party, the Patriotic Union of Kurdistan, Kurdistan Islamic Union, Kurdistan Islamic Movement and other small parties, including those representing Assyrian and Turkmen minorities. New signs on billboards throughout the KRG capital of Erbil tout “yes to independence.”

The Kurdish region faces a multiplicity of hurdles as it prepares for the referendum. The top among them are internal issues, such as demands on July 12 by the Change Movement (Gorran) and Kurdistan Islamic Union that elections for the regional parliament be held before—or during—the referendum and that the parliament be reconvened. External actors also pose challenges. Moktada al-Sadr, the powerful Shia leader in Baghdad has called on Masoud to postpone the referendum, according to a July 5 report by Asharq al-Awsat.

“The time has come for our own people to determine their future,” Falah Mustafa Bakir, the head of the department of foreign relations for the KRG, said in an interview. Fourteen years after the U.S.-led 2003 invasion and the problems between Baghdad and the Kurds have not been resolved by decentralization, autonomy and federalism, he said. “To have a democratic environment we need democratic practice and democratic culture,” Bakir said. The Iraqi government has breached the constitution, not distributed the federal budget correctly, and a referendum will bring about “stability and security.” It will also be a mandate for the Kurdish leadership to negotiate with Baghdad, Bakir said. “We can be good partners as two good neighbors,” he said. “This is a turning point in our history.”

Bakir said that they are aware securing independence will not be easy. Gathering the support for thirty-four local political parties for the referendum has been a challenge, as well as explaining to Baghdad that the region does not want a new round of conflict. In contrast to claims that Kurdish independence would make the area unstable, the last hundred years had “not seen stability and prosperity” in the region, he said. He pointed to the suffering of Kurds under Saddam Hussein when 182,000 people were killed during the Anfal campaign, and he also noted that under the current system, Baghdad does not share wealth and power with the north. “We assure our neighbors that this step will not go against the interest of these nations . . . we are for building bridges and we can assure them that the future independent Kurdistan would be a partner and ally.” Towards that end, the KRG is reaching out to its partners abroad. Bakir referenced the United States, the U.S.-led coalition, the UN and the EU. “First they can support dialogue between Erbil and Baghdad,” he said. “Second, the democratic values in the process of referendum need to be respected.”

The referendum doesn’t come in a vacuum but was scheduled to coincide with the winding down of the war against ISIS in Iraq. The Iraqi security forces liberated Mosul in early July after grueling battles in the Old City that saw ISIS blow up the famed Great Mosque of al-Nuri, which is where Abu Bakr al-Baghdadi declared the “caliphate” in 2014. To the west the Popular Mobilization Units, a group of mostly Shia militias that are an official paramilitary force of Baghdad, have successfully cleared a large area of ISIS. But the jihadists still have pockets in Tal Afar, Hawija and parts of Anbar province and they are not as defeated as it seems. Seventeen Islamic State members were ambushed near Rabia, near the Syrian border, by members of the Rojava Peshmerga on July 12, and ISIS members raided a village near Qayarrah, killing two Iraqi journalists in an area that was supposed to be free of the extremists.

The Kurdish region’s leaders argue that the Peshmerga, the armed forces of the KRG, proved themselves in battle with ISIS over the last two years. In meetings with European Union officials in Brussels on July 12, President Masoud said that 1,745 Peshmerga had been killed in battle with the extremists and more than ten thousand had been injured. The Peshmerga liberated thirty thousand square kilometers. Masoud reminded the EU that the Kurdish region was hosting 1.4 million Iraqi internally displaced persons and 233,000 Syrian refugees according to a report at the Kurdish media outlet Rudaw.

To shore up the region, the Kurdish leadership also wants to push through a series of reforms during the period leading up to the referendum. In May, Kurdistan Regional Government prime minister Nechirvan Barzani and Kurdistan Regional Government deputy prime minister Qubad Talabani met with a delegation of representatives from the United States, Germany and the UK. According to reports, Prime Minister Barzani told the UK’s Defense Ministry Senior Advisor for the Middle East that the government and the Ministry of Peshmerga were pushing further reforms for the Kurdish forces.

Bakhtiyar Mohammed, an advisor at the Peshmerga Ministry, said the reforms cover thrity-five different articles relating to issues as disparate as arming, training, logistics and upgrading barracks and living facilities for Kurdish soldiers. Reforms also seek standardization of salaries. Due to the Iraqi constitution, the KRG is not permitted to have an air force, but the Peshmerga want to expand their helicopter arm. This issue is still awaiting the approval of the president’s office, according to sources in the KRG.

The region wants to continue reducing the role of political parties in the Peshmerga. Prior to the war on ISIS, one of the issues the Peshmerga faced was that the majority of their forces came under the command of two units called seventy and eighty, which were affiliated with the PUK and KDP respectively. If you went to sectors of the frontline during the war it was relatively common to see political banners either at nearby, indicating which sector was run by which Peshmerga and whose umbrella party the men came from. This is a holdover from the days before 2003 during the struggle against Saddam Hussein and the 1990s when the Kurdish parties fought a civil war. The reforms since have tried to reduce the role of parties and professionalize the entire system under the Ministry of Peshmerga Affairs.

To sustain the process of creating a professional military, Kurdish commanders like General Najat Ali say the international community should continue to support the Peshmerga, thousands of whom were trained during the war on ISIS through the Kurdistan Training Coordination Center. “The international community should understand and respect the decision and help us, we are allied with the United States and we proved to the whole world we could fight ISIS,” said Ali in an interview. Samuel Helfont wrote in a May 2017 paper at the Foreign Policy Research Institute and the American University of Iraq Sulaimani that “helping the Kurds reform their military forces by building capacity of forces under control of the nonpolitical Ministry of Peshmerga is vital to achieving these goals.”

The Kurds are trying to mollify concerns in the United States and EU about independence. Barzani has said that there is no going back on the referendum and in Brussels he asked EU officials that if they could not support the right of Kurds to vote, then to at least stay neutral. U.S. State Department spokesperson Heather Nauert has called the referendum an “internal matter,” which implies the United States may not interfere.

During the war on ISIS many EU states and the United States formed a unique close relationship with the Kurdish region that included not only arms shipments and training, but also targeting funding for various programs. However with the referendum coming up there will be tensions over voting in areas considered disputed territory between the central government and the Kurdish autonomous region. This includes territories around Kirkuk, Khanaquin, Sinjar and Makhmur. The governor of Kirkuk, Najmaldin Karim, is a major supporter of independence, and in March the provincial council voted to raise the Kurdish flag at local Kirkuk government buildings. Iraq opposed the decision, and Iran’s foreign ministry spokesperson Bahram Qassemi said the flag would “increase tensions.” This is a sign of worse to come. While foreign powers may have sympathy for Kurdish rights to have a vote, if Iraq vehemently opposes electioneering in the disputed areas things will be different. Some of the borders of these areas were drawn during the recent conflict, with Peshmerga frontlines and those of Shia militias abutting one another. Kurdistan also faces hurdles with Iran and Turkey on its borders. Dealing with those two countries, and other Arab states such as Saudi Arabia, will likely be next on President Barzani’s list.

Image: Kurdish Peshmerga forces celebrate on the eve of Newroz Day, a festival marking their spring and the Persian New Year, in Kirkuk March 20, 2015. Newroz Day is also celebrated in other countries, including Turkey, Azerbaijan, Iran, Afghanistan and Tajikistan. REUTERS/Ako Rasheed