Will the Kurds Spark Another Middle Eastern Proxy War? 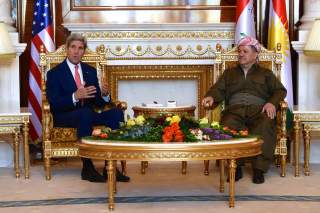 Many things have changed since the day in November 2013 when Reçep Tayyip Erdoğan and Masoud Barzani addressed a massive crowd in Diyarbakır, Turkey’s largest Kurdish city, celebrating the eternal friendship between the Turkish and the Kurdish peoples. In the following three years, Turkey abandoned its Kurdish Opening policy and is now once again at war with the Kurdistan Workers’ Party (PKK). The center of Diyarbakır has been the theatre of a months’ long siege and Turkey’s pro-Kurdish party is regularly threatened to be shut down. The Kurdistan Regional Government of Iraq (KRG) led by President Barzani has been fighting against the Islamic State of Iraq and the Levant (ISIL), the greatest threat faced by the Kurdish region since the early 1990s, and its leadership is struggling with a financial crisis and emboldened political rivals. But one of the few things that has not changed is the close partnership between the two leaders and this relationship is going to be crucial to the aftermath of the liberation of Mosul.

The Mosul operation against ISIL – launched to restore Iraq’s sovereignty over its second largest city – is unraveling the ambitions of regional players over the spoils of war. Among them, the KRG is the actor that has most to win and most to lose. President Masoud Barzani has promised his people a referendum on independence in the aftermath of the war, which will be held in the Kurdish region as well as in the disputed areas that the Peshmerga forces have liberated from ISIL. Independence is the dream of a vast majority of the Kurdish population, but the road to the referendum seems to be filled with formidable obstacles.

The call for independence has been voiced in a climate of rising instability due to the costs of the war on ISIL and the consequent economic crisis which has undermined the popularity of the president. The rule of Barzani’s Kurdistan Democratic Party (KDP) is also facing a growing threat from its political rivals since the two major opposition parties — the Patriotic Union of Kurdistan (PUK) and the Gorran (Change) movement — have formed an alliance. The opposition has assumed a much more tepid stance on the referendum, and observers have highlighted the risks that an independent Kurdistan would run in such a turbulent region. The new nation will, in fact, have to face arduous challenges in its relationships with its neighbors. First of all, the recent improvement in Erbil’s relationship with Baghdad is largely due to the war on ISIL. The aftermath of the liberation of Mosul will reopen the unsolved question of the future of Northern Iraq and of the areas disputed between the KRG and the central government, including the oil-rich city of Kirkuk. On this issue, Iran and Syria will most likely support Iraq because of their strong relationships in the regional dynamics and because of their concerns regarding the consequences of a strong and independent Kurdish state on their own Kurdish minorities.

In this context, the robust partnership between Ankara and the KRG is at the same time pivotal and problematic. These ties developed recently, but in a very different context. Until the late 2000s, Turkey was only able to look at the Kurds of Iraq as a security concern because of the decades-long conflict with the PKK. Turkey saw the increasing autonomy of the KRG as a nightmare. Things slowly changed in the years 2007-2009, when then-Prime Minister Erdoğan adopted a new Kurdish policy (the Kurdish Opening) and started peace negotiations with the PKK. In this new political environment, Ankara’s new relationship with the KRG, and particularly with Barzani and his KDP, had multiple aspects and was beneficial to both sides. On the one hand, the Kurdish region became an important market for Turkey’s export-led manufacturing and a flow of investments helped the economy of the KRG blossom. On the other hand, Turkey’s ruling Justice and Development Party (AKP) and the KDP showed a certain degree of political affinity in their social conservatism as well as in their friendly approach to capitalism and welcoming attitude towards international investors. The relationship with Barzani and the KDP served Erdoğan’s interests in his competition with the pro-PKK legal parties to win the Kurdish vote of southeastern Turkey. At the same time, Barzani used this new friendship to balance his deteriorating ties with the central government of Iraq.

If this relationship was seen with favor by the United States and the international community due to its stabilizing effects, the evolution of regional dynamics has complicated the pattern. Turkey and Iran are on the opposite sides of the civil war in Syria, and the looming decline of ISIL raises questions over the future of both Northern Syria and Northern Iraq. Ankara has recently shown its appetite for a major role in post-ISIL Mosul that will certainly create tension with Baghdad and consequently with Tehran. The fact that the positions of the KRG’s main opposition parties – PUK and Gorran – somehow mirror the ones expressed by Iraq and Iran is a sign of the extent to which the regional dynamics and the domestic affairs of the KRG overlap. In the past few years, the PUK leadership has been able to strengthen its relationship with Tehran as a way to counterbalance Barzani’s ties with Turkey. The many factors that have been raising tensions among Iraqi Kurdish parties – the financial crisis, the politicization of the Peshmerga forces and the extension of Barzani’s presidential term – can be easily exacerbated. In a climate of uncertainty over the future of Nineveh Province and rising tension in the KRG, the alignment of the Kurdish parties with external powers – Turkey and Iran – appears to be fertile ground for another Middle Eastern proxy war.

The renewed Turkey-PKK conflict is another element that must be taken into consideration. Ankara’s Kurdish policy of integration and peace – which had facilitated the rapprochement with the KRG – was buried in the summer of 2015. Erdoğan has assumed nationalist rhetoric and the war with the PKK has reached violent peaks. Turkey’s intervention in Syria in August 2016 is a further move to contain the expansion of Kurdish forces in Syria, politically linked to the PKK. Barzani’s embrace of this new anti-Kurdish version of the AKP heavily affects his popularity in transnational Kurdish public opinion, including his own constituency. The PKK has responded to the Turkey-KDP relationship by aligning with the PUK and developing its own ties with Iran, a move that would make it part of a potential intra-Kurdish confrontation.

In this regional climate, an independence process carried on unilaterally by the KRG could bring about further instability and a risk of civil war. All the regional powers involved see the future of northern Iraq as a zero-sum game in which the stability of both Turkey and Iraq are at stake. In this situation, U.S. disengagement from the region could be the factor that finally ignites the fire. A lack of commitment by the Trump Administration towards the territorial integrity of Iraq might trigger the direct intervention of Iran and Turkey, with dangerous consequences.

The United States is still in the position to broker a solution that satisfies all the parts. First, Iraqi sovereignty over the Nineveh plain must be guaranteed in order to avoid the risk of state disintegration and the direct involvement of external actors. Second, Iraq must be willing to negotiate a new solution for the Sunni areas previously or currently occupied by ISIL, which should imply some sort of regional autonomy. Turkey could play a positive role in the process, a role that would restore its pre-ISIL political and economic role among Iraq’s Sunnis. Third, article 140 of the Iraqi constitution – which promised a referendum on the disputed areas – must be implemented so that the borders of the KRG can finally be defined. If there will be a referendum on Kurdish independence, the process must be carried on in cooperation with regional players and within widely agreed territorial borders.

The settlement of post-ISIL Northern Iraq will represent a very important part of the new Middle East order and Washington can still play a stabilizing role and prevent other international actors from filling the void.

Nicola Degli Esposti is a doctoral student at the department of International Relations of the London School of Economics. He works on Turkey and the transnational Kurdish movement.