Will the Saudi-Qatar Spat Escalate Friction Between America and Iran? 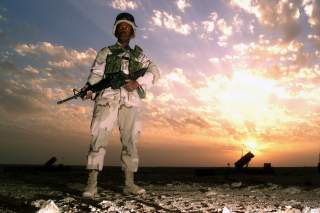 In late 2009, General David Petraeus—the former head of U.S. Central Command—dispatched two of his aides on a tour of Arab capitals to assess whether U.S. support for Israel was undercutting America in the region. Their final report was sobering. Israel’s intransigence with the Palestinians, the report concluded, was jeopardizing U.S. standing with its Arab allies.

While the report made headlines when it was made public in March 2010, the reason Petraeus ordered it was equally crucial. During his tenure as U.S. commander in Iraq, Petraeus noticed that nearly everywhere he turned there were depictions of Jerusalem’s Al-Aqsa Mosque, the third holiest site in Islam. They were on prints in Iraqi homes, used as the background for political posters and on the walls of Iraqi businesses. What gives? Petraeus asked about the the posters and his staff told him that they symbolized solidarity with the Palestinian cause, since Jerusalem was occupied by Israel. Petraeus was surprised; he had no idea the conflict had such resonance.

Since the report’s conclusion was publicized seven years ago, the Israeli-Palestinian conflict has faded from view, its significance eclipsed by Tunisia’s Arab Spring, the Egyptian Revolution, the Syrian civil war, the political unraveling in Yemen, the rise of ISIS—and any number of other regional crises. But now the conflict has once again taken center stage, the result of the decision by six Arab nations led by Saudi Arabia (including the United Arab Emirates, Bahrain, Egypt, Libya and Yemen), to cut ties with Qatar and quarantine its economy.

The rough outlines of the Saudi-Qatar dust-up are well-known: the decision to isolate the tiny, but rich, Gulf nation was taken, the Saudis say, because of Qatar’s funding of Syrian and Libyan extremist groups—and its support for Hamas, Hezbollah and the Muslim Brotherhood. But what’s worse (at least from the Saudi point of view), is that Qatar maintains cordial relations with Iran. For Saudi Arabia, it’s Qatar’s stance on Iran that is the true sticking point; it’s a kind of political apostasy.

The Saudi-Qatari quarrel has roiled Washington policymakers, though not simply because the principality sits atop one of the world’s largest deposits of natural gas (Iran co-owns one of the fields with Qatar) and leases out a part of strategically placed Al Udeid Air Base to the United States, which is not far from Iran’s Persian Gulf naval installations. The falling out also threatens to shatter U.S. plans to construct a unified, Sunni heavy and American led anti-terrorism front that the president trumpeted as one of the triumphs of his recent trip to Riyadh.

Strangely, the rift has not only left the administration scrambling to repair the damage, but it has put the Israeli-Palestinian conflict back at center stage as the region’s central problem. The reason for this is because, in stigmatizing Qatar, Saudi Arabia has—albeit indirectly and unofficially—aligned itself with Israel, the Kingdom’s silent partner in a program to roll back Iranian influence. Of course, Israel is not simply anti-Iranian, it is also the occupier of Jerusalem, as David Petraeus (and any Muslim family with a print of the Al-Aqsa Mosque on their wall) will tell you. “Yes, yes, a thousand times yes—the Qataris have a lot to answer for in terms of flirting with extremist groups in Syria and Libya,” an American business executive with strong ties to the Qatari leadership told me in a recent telephone conversation. “But the real sticking point for the Saudis has less to do with funding terrorists than it does with Iran. For the Saudis, ISIS is a secondary concern, while Iran is at the head of the line.” That is also true, of course, for Israel.

Of course, that the Saudis and Israelis are winking allies in confronting Iran is not a secret. Just prior to Mr. Trump’s visit to Riyadh, Danny Danon, Israel’s UN ambassador, warned the president to not take his eye off the ball. ISIS is a major challenge for the United States and the region, he wrote in an article for Fox News, but the gravest threat to regional stability is not ISIS, but Iran. What is needed, he said, “is a concerted effort by stringently enforcing sanctions that are in place, judiciously weighing further possible restrictions and continuing to leave all other options on the table in facing this extremist regime.” The Saudis could not have said it better.

Indeed, the Israelis nearly crowed when the Saudi-Qatari rift was made public, as it confirmed their views that—in the fight against Iran—they and the Sunni world see eye-to-eye. Moshe Yaalon, Israel’s former defense minister (a highly respected and influential voice in Washington, and a prospective future Israeli prime minister), said that Tel Aviv strongly supported the Saudi action. “The Sunni Arab countries, apart from Qatar, are largely in the same boat with us since we all see a nuclear Iran as the number one threat against all of us,” Yaalon said at a June 5 conference organized by Tel Aviv’s Institute for National Security Studies.

Under normal circumstances, this kind of support would be good news for Saudi Arabia, which intends to recruit as much support for its anti-Qatar initiative as it can. But Yaalon got it wrong: not every Sunni-Arab country sees itself in the same boat as Saudi Arabia, in part because jumping in that boat means sharing a cabin with Israel: so it is that Kuwait, Oman and Turkey have declined to join Saudi Arabia’s coalition, while Jordan (though downgrading its relations with Doha) has kept its distance from the quarrel.

Then too, the release of a trove of emails between John Hannah of the pro-Israel Foundation for Defense of Democracies and Yousef Al Otaiba, the UAE’s ambassador to the United States, shows that the Saudis (and the UAE) are, in fact, much more than simply winking partners with Tel Aviv. Hannah’s views are not a surprise given that he served as Dick Cheney’s deputy national security advisor and has been the foundation’s most prominent anti-Qatar voice, but Otaiba’s willingness to do the foundation’s bidding has given the Saudi-led anti-Qatar alliance a black eye. At best, the emails show open collusion between an organization leading the United States’ anti-Qatar charge and an influential diplomat serving “little Sparta,” which is Defense Secretary Jim Mattis’s admiring description of the UAE. The leaking of the emails has not only undermined Saudi’s anti-Qatar claims, they’ve actually provided growing Sunni sympathy for plucky little Qatar’s show of independence. Somewhere in the depths of the Saudi Foreign Ministry, the Kingdom’s officials are muttering that if Israel really wanted to show solidarity with them, then it could start by shutting up. So while the region’s Sunnis might (or might not) agree that the Qataris are political apostates from Saudi Arabia’s puritanical, anti-Shia, version of Islam, at least they’re not making common cause with Jerusalem’s occupier.

Not surprisingly, all of this seems lost on Donald Trump and his chief military and foreign-policy advisors, who have been beating the anti-Iran drum for years. James Mattis has famously said that he views the three gravest threats to the United States as “Iran, Iran, Iran.” That point of view now has the support of Lt. Gen. H. R. McMaster, who focused almost exclusively on Russia as America’s primary foreign-policy challenge prior to his appointment as Trump’s national security advisor. On May 1, in the lead-up to Trump’s Middle East foray, McMaster told Fox News that Iran had fomented the current “humanitarian political catastrophe in the greater Middle East.”

McMaster’s claim shocked a number of senior military officers of the military’s joint staff. “Iran is responsible for the region’s humanitarian disaster? Give me a break,” a senior colonel told me in the wake of McMaster’s statement. “That would be news to the people of Anbar [the Sunni province of Iraq], who view the Iranians as their liberators.” McMaster, this colonel told me, “ought to know better.” So what explains the shift? Senior Pentagon officials, including senior military officers who know and admire McMaster, say that the general’s anti-Iran views are the influenced of Mattis and Derek Harvey, a former U.S. Army colonel who now serves as the senior director for Middle East policy on the National Security Council.

David Petraeus once described Harvey as his favorite intelligence officer. Harvey was brought into the administration by Lt. Gen. Michael Flynn, who is currently under investigation for his ties to Russia. Like Flynn, he was a constant and outspoken Obama critic, telling his colleagues that Obama’s policies were actually pro-Iranian and needed to be rolled back. “Harvey is just over-the-top on Iran, and I mean really crazy stuff,” one former senior Army officer said. “He thinks Iraq is not only a failed state, it’s the one place where the U.S. could take on Iran militarily and win.” The characterization is chilling, but apt. Back in March of 2015, Harvey wrote an article in the Weekly Standard titled “Obama’s ISIS strategy empowers Iran.” The former colonel argued in the article that by helping Iran in the fight against ISIS, the Obama administration was actually threatening Israel, Egypt and Saudi Arabia. Harvey didn’t say it directly, but the implication of his argument was hard to miss: the key to stability in the Middle East was not to “bomb the hell” out of ISIS (as Donald Trump would have it), but to recruit them as allies in the fight against the real enemy—Iran. “Like I said, really crazy stuff,” the former officer said. “Just nuts.”