Will Tom Cotton Run for President in 2024? 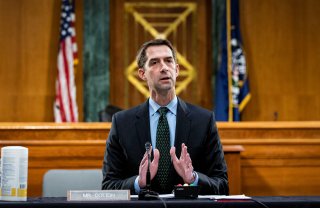 The 2024 Republican primary competition is frizzling, as nearly a dozen GOP lawmakers are rumored to run and lead the party in a post-Trump era. But as previous candidates focused political campaigning on contentious issues, the upcoming fight for the nomination has been centered around their ardent loyalty to former President Donald Trump.

One of the most recent acts of allegiance to the former president among White House hopefuls was whether to overturn the 2020 election results that certified President Joe Biden’s victory. As Republican Sens. Josh Hawley (Mo.) and Ted Cruz (Texas) carved a devoted, political path in support of Trump by boasting claims of a “stolen” election and voting to overturn it, other GOP Senators, like Tom Cotton (Ark.) and Ben Sasse (Neb.)—both of which are also speculated to be eyeing a 2024 White House bid—voted to certify Biden’s election win.

Cotton’s decision to certify the election results has propped up his speculated presidential candidacy, as it mixes with his support of Trump populism. The combination of the contrasting positions—preaching Trumpism as the future for the GOP while building separation from the former president, though he did not vote to convict Trump—could likely be what the party needs to diminish intra-party divisions coined over the past four years.

“He could not have timed better his rather elegant refusal to join the Electoral College challenge mounted by his peers,” Dr. Janine Parry, a political science professor and director of Arkansas Poll at the University of Arkansas, said in an email interview. “It allowed him to break with the highest-profile 2024 party rival (Trump), attack congressional overreach, extol states’ rights, and also prolong his party’s dimming long-term prospects. Republicans need the electoral college to remain intact. They are unlikely to win the presidency again without it.”

But rather than focusing on the vote’s partisan ties, Cotton refined his focus on the constitutionality of Congress’ attempt to seize authority over the Electoral College vote, contending in a statement, “the Founders entrusted our elections chiefly to the states—not Congress.” That allows him to tower over the deep issues jabbing at the party’s unity, “showing himself to be a level-headed, responsible statesmen.” The plea could also resonate with traditional Republicans, a group that presidential prospects like Hawley and Cruz will likely have difficulty rallying support from.

“As of now, Cotton is making himself as much of a contender as Hawley and Cruz,” Dr. Jordan Butcher, assistant professor of political science at Arkansas State University, said in an email interview. “Cruz has been around and has made a name for himself, which is what Cotton and Hawley are increasingly attempting to do. Each has different appeals to members of the GOP.”

Cotton’s decision, however, could tear at his candidacy in the 2024 primaries and ultimately alienate Trump supporters, if loyalty to the former president is still considered a key player in garnering the party’s nomination. When the Arkansas senator moved to certify the election results, Trump blasted him on Twitter, warning that Republicans “NEVER FORGET!”

And his infamous column for the New York Times that asserted support for Trump’s threat to send the U.S. military to tame the civil unrest over the police killing of George Floyd triggered a swirl of backlash on social media from protesters and journalists.

Although he came under fire for distancing himself from Trump, Cotton does have similar politics to the former president, calling for law and order, and made sure to make the most appearances on Fox News in January, followed by Hawley and Sen. Marco Rubio (R-Fla.). Cotton also spoke at Trump’s convention and advertised for the president through TV ads during the last year.

“He comes from a smaller state, but has managed to raise a comparable national profile, and been consistently more strategically successful than either of the others,” Parry said. “I suspect that’s because Cotton’s commitment to hypernationalism—economic and geopolitical—is sincerely held. It helps him avoid gaffes.”

More recently, Cotton has been able to raise the temperature of his rumored candidacy through Merrick Garland’s confirmation hearing this week to lead Biden’s Department of Justice, where the Arkansas lawmaker, Hawley, Cruz and Sasse all sit on the Senate Judiciary Committee. The hearings offer a high-profile platform for members with broad political ambitions.

“Committee service is an incredibly important part of a member's job, that being said, some committees are more important than others,” Butcher said. “The Senate Judiciary Committee is important, but the high profile of the committee as of late has allowed all the members who serve to garner more public attention. More attention equals more free press, which can help when running for office.”

In the past, Trump’s nominees spurred questions from several White House seekers at the time, including Vice President Kamala Harris, Sen. Amy Klobuchar (D-Minn.) and Sen. Cory Booker (D-N.J.). Harris’s prosecutorial questioning style amassed her political popularity within the party, as she was once a leading contender in the 2020 Democratic primaries.

While all four GOP presidential hopefuls have been advised to take a backseat in thoroughly interrogating Garland, Cotton did join Cruz’s effort in sending a letter to Senate Judiciary Chair Dick Durbin (D-Ill.) that outlined their plan to press the attorney general nominee over his agenda to investigate New York Gov. Andrew Cuomo’s inactions and handling of the coronavirus-related deaths in nursing homes.

Cotton also questioned Garland regarding one of Biden’s executive orders on “racial equity” on Monday, resurfacing an issue he brought up during a hearing for Biden’s nominee for Housing and Urban Development secretary Marcia Fudge, examining the difference between equity versus equality.

But as Cotton and other contenders rise to the front of the Republican Party for the nomination in 2024, experts cautioned that much can happen over the next two years, especially if Trump decides to fulfill his teases and run for a non-consecutive term.

“We have all learned how quickly things can change and that while Hawley, Cruz, and Cotton all appear to be setting themselves up for their next move, within the span of [two] years a new player could come to the forefront or the GOP may move on. It is unclear how the party will align itself,” Butcher said.