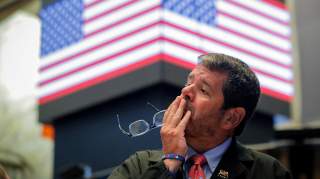 It’s an old axiom that it is easier to start wars than to end them. President Donald Trump now finds himself in this very predicament. His vow to raise tariffs on another $300 billion worth of Chinese goods in September has further heightened hostilities with Beijing. China is retaliating by allowing the value of the yuan to sink and ordering state buyers to terminate imports of U.S. agricultural products. It’s also threatening to impose further duties on them. In turn, Treasury Secretary Steven Mnuchin labeled China a “currency manipulator” on Thursday, which it is not.

How does any of this help to make America great again?

To hear Trump tell it, he can huff and puff and blow down the great wall of Chinese resistance to American imports. But rather than establishing escalation dominance, Trump is creating self-inflicted economic wounds that will prove difficult to heal. His reliance on the blunderbuss of tariffs could imperil the economy. Indeed, Trump’s purblind impulses run the risk of turning China from a strategic competitor into an outright enemy. But decades after the original one ended, America does not need a new cold war. Quite the contrary. An economic, let alone military, conflict with Beijing is antithetical to its true national interests.

We’ve been here before. The dangers of the toxic brew of nationalism and tariffs form the central lesson of the 1930s and should hardly require recitation. After the crash of October 1929, a cycle of mounting tariffs, most notably the Smoot-Hawley Tariff Act of 1930, which was supposed to aid American farmers, compounded the original damage. Soon a series of beggar-thy-neighbor policies took hold that featured attempts to devalue currencies around the globe.

Trump is doing his predecessors one better. His innovation is to impose tariffs at a moment when the American economy has been prospering. There doesn’t appear to be much of a strategy to Trump’s actions beyond a visceral belief that he can pummel America’s allies and adversaries into submission by whacking them with tariffs. He seems to have jettisoned the notion that he needs to consult any of his advisers, apart from Peter Navarro, an adherent of mercantilist economics and the author, among other things, of a kooky tract called Death By China: Confronting the Dragon – A Global Call to Action. Navarro sees trade with China as a wholly zero-sum game and views Beijing in theological terms, referring to its “seven deadly sins.” If anyone can lead us into a fresh global depression, as I’ve previously argued in Politico, it is Navarro.

The animating idea that seems to fuel Trump’s approach is that America can act with impunity around the world. But the results have been meager at best. Trump hasn’t managed to get Congress to approve a new trade deal with Canada and Mexico. He’s making threatening noises about trade with Japan and Europe.

Above all, Trump is mired in a standoff with China, which is happily watching Trump inflict serial damage on the American economy, not least the farmers who comprise a good chunk of his political base. Given the capriciousness of American policy, Beijing may well decide to shift its agricultural imports permanently to other countries, including Russia, where it has already upped its wheat and soybean purchases. Trump wagered that China would be unwilling to suffer an economic slowdown, but he underestimated its national pride. China, which has a long memory of being bullied by the imperial powers in the nineteenth century, is hardly likely to cry uncle.

The Wall Street Journal editorial page states today that Trump’s tariff policy has already shaved a full percentage point off U.S. GDP growth. Trump will try to blame the Federal Reserve, but here, too, he is starting to receive some blowback. In a joint statement in the Wall Street Journal, former Federal Reserve heads Paul Volcker, Alan Greenspan, Ben Bernanke and Janet Yellen declare, “We are united in the conviction that the Fed and its chair must be permitted to act independently and in the best interests of the economy, free of short-term political pressures and, in particular, without the threat of removal or demotion of Fed leaders for political reasons." Meanwhile, Trump keeps pretending that China, not America, is paying the costs for his tariffs. If he keeps sabotaging the economy, then Trump will singlehandedly prove the best champion for his Democratic presidential opponent in 2020.