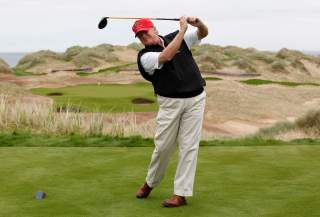 It’s becoming increasingly clear why Donald Trump did not seek to prosecute Hillary Clinton after the 2016 election. He never wanted to lock her up. Instead, he wants to run against her one more time in 2020. In what amounted to a plea for another chance, Trump made his ardor for Clinton and displeasure with Elizabeth Warren clear today.

In a tweet, he announced, “I think that Crooked Hillary Clinton should enter the race to try and steal it away from Uber Left Elizabeth Warren. Only one condition. The Crooked one must explain all of her high crimes and misdemeanors including how & why she deleted 33,000 Emails AFTER getting ‘C’ Subpoena.” A few hours later, Clinton responded, “Don’t tempt me. Do your job.”

How great is the temptation? Clinton has never really come to terms with her defeat. The opportunity to become the first female president must be tantalizing, especially when Clinton sees that Warren, a political neophyte next to Clinton, might become the Democratic nominee. Then there is the lure of finally exorcising Trump, the man who, against all the odds, was elected president, putting the kibosh not only on her big planned fireworks display on election night at the Hudson River, but also on her political aspirations. Now at least one poll released on Monday suggests that she and Trump would be in a deadlock with each garnering 45 percent of the vote.

When it comes to Trump and Clinton, a psychologist might conclude that the two are locked in a codependent relationship. Neither can really exist, at least in the political realm, without the other. As he faces impeachment, Trump knows that no one could serve as a better foil for him than Clinton. It’s Hillary, he keeps suggesting, who is the nefarious one, not him. Standing near her provides him with a kind of blanket absolution for any misdeeds he may have perpetrated.

The prospect that Hillary will run, though, is about nil. The Democratic party has moved on—only 18 percent of Democrats want her to run again, according to Rasmussen Reports—and Hillary knows it. She herself observed in March, “I’m not running, but I’m going to keep on working and speaking and standing up for what I believe.” So she will continue to throw shade at Trump. If her recent activity is any sign, then she’s becoming more aggressive about deploying Trump’s favorite medium, Twitter, against him.

Indeed, as Trump becomes increasingly consumed by the prospect of impeachment and lauds his “great and unmatched wisdom,” the slogan “do your job” might be wielded against him to good effect. The blunt fact is that Trump, who cherishes his executive time, has never put in the kind of hours that his predecessors devoted to the presidency. Many of his days are spent playing golf and the gravest charge that he could lodge against Joe Biden was that he played golf with a Ukrainian businessman (an accusation that turns out to be incorrect). A website devoted to chronicling his time on the links reports that as of October 5, 2019, Trump has been golfing 237 times and spent “nearly 22 percent of his days in office at one of his golf properties for some portion of the day.” Meanwhile, Trump’s golf properties in Scotland lost a cool $14.3 million in 2018. According to the Washington Post, “The results add further pressure to two of President Trump’s key overseas investments at a time when the company faces backlashes on many fronts, including customers who shun the president’s family business for political reasons and golf course neighbors upset by the company’s plans to build hundreds of new homes on bucolic farmland.”

It should come as no surprise, then, that Trump seeks a diversion from his time of troubles. But Clinton is not going to serve as his inadvertent savior by running in 2020. To emerge from his political sand trap, Trump can’t putter around. He will have to blast his way out by himself.