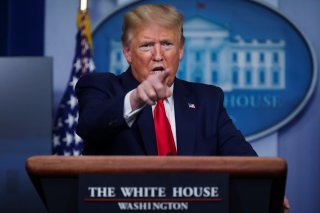 President Donald Trump announced last night that he will issue an executive order closing off legal immigration to America. He tweeted, "In light of the attack from the Invisible Enemy, as well as the need to protect the jobs of our GREAT American Citizens, I will be signing an Executive Order to temporarily suspend immigration into the United States!" But what his announcement actually means in practice is unclear—and it directly contradicts his upbeat message that the coronavirus crisis will soon be over and shown to be no big deal.

What would be the effect of an executive order? So far, the White House has not commented. Legal immigration has already been mostly suspended. There are no citizenship ceremonies taking place and visa offices are shuttered. Trump could target holders of green cards and H-1B visas. This would deliver a real blow to Silicon Valley which relies on engineers from China and India. Immigrants also constitute almost a third of doctors and surgeons in America, according to Vox. What a total ban would imply for farmworkers is also an open question. Previously, Trump had championed agricultural visas. He stated in early April, “We want them to come in. We're not closing the border so that we can’t get any of those people to come in. They've been there for years and years, and I've given the commitment to the farmers: They're going to continue to come. Or we‘re not going to have any farmers.” He will be challenged on what’s changed in the past week.

Legally, Trump is likely on solid ground. His travel ban was approved by the Supreme Court and he can plausibly cite the coronavirus emergency to justify his decision. While he might be mired in legal battles for months, the Supreme Court would almost surely uphold his executive order.

Politically, the decision is probably not without cost for Trump. It was clearly aimed at his base and the announcement was received with plaudits by organizations such as NumbersUSA and American Workers Coalition. Senator Tom Cotton (R-AR), who seeks to reduce legal immigration, applauded the move as well. But it will widen the rift inside the Republican party over immigration as the business community, including the U.S. Chamber of Commerce, registers its opposition. This will provide an opening for former Vice-President Joe Biden to depict himself as both a friend of the business community and a defender of a traditional vision of America as open to immigrants.

The biggest danger Trump faces is that his political adversaries will successfully depict his announcement as one in a series of attempted diversions from actually dealing with the coronavirus. Even as Germany and South Korea have conducted widespread testing and avoided mass deaths, America remains way behind. So far, 750,000 Americans have contracted the coronavirus and over 42,000 have perished. A new report in Politico offers a fairly dire assessment of Trump’s prospects: “'If the testing does not get sorted out as soon as possible, it will be another nail in an almost closed coffin,’ said one Republican close to the White House who argued messaging alone cannot solve the political challenge it presents for Trump.” Trump’s true test, in other words, is testing. But he continues to react testily to the notion that everything isn’t hunky-dory, slamming Maryland Gov. Larry Hogan for procuring 500,000 testing kits from South Korea.

Trump’s push to reopen the economy quickly is also not gaining much purchase. Most Americans take a different view, according to a new poll in the Washington Post. It notes, “Most Americans — 54 percent — give the president negative marks for his handling of the outbreak in this country and offer mixed reviews for the federal government as a whole. By contrast, 72 percent of Americans give positive ratings to the governors of their states for the way they have dealt with the crisis, with workers also rating their employers positively.” Meanwhile, oil prices continue to slide and Wall Street futures are down 600 points.

Trump faces a profound problem. He can issue all the executive orders he wants. But there is no executive order that he can issue reviving the economy. Only business and consumer confidence can achieve that. If the Senate passes a deal today to inject another $500 billion into a small business lending program, it will help to bolster the economy. As he faces the greatest crisis of his presidency, Trump needs to deliver not simply words, but also deeds.