Will Trump Rescue Theresa May? 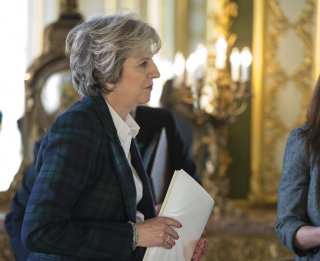 British Prime Minister Theresa May touched down in America on Thursday and spoke at a Republican retreat in Philadelphia. How would she react to Donald Trump? She offered accolades for his election, pledged to stand shoulder-to-shoulder with him in fighting radical Islam, and agreed that Europe needed to pull its weight within the NATO alliance. Yet she also contradicted his nationalism, touting Britain’s overseas humanitarian aid and reiterating her intention to become “even more global and internationalist in action and in spirit.” It was a tightrope of a speech and her upcoming huddle with Trump will have to be just as carefully balanced, given the single word that underscores all of this: “Brexit.”

May is often compared to Margaret Thatcher. It’s a clunky analogy—the prime minister’s preference for conservatism lite has more in common with John Major—but the similarities are still there: both are Tory women, both have imperturbable demeanours, both regularly batter their hapless Labour counterparts in Parliament. On this, though, the comparison falls apart: whereas Thatcher came to office able to define her own circumstances, turning the British ship of state as she saw fit, May’s job has been largely defined by forces beyond her control. The bulging Brexit portfolio was dropped in her lap by the British people, who voted “out,” and by her predecessor David Cameron, who called the referendum and then skedaddled when it didn’t go his way. Leaving the EU is consequently her primary concern. It is also her secondary concern and her tertiary concern. Its success or failure will define her premiership.

In a speech earlier this month, more candid than the one she gave in Philadelphia, May acknowledged that the most likely outcome for Britain was a “hard Brexit,” crashing out of the EU’s free-trade single market. This is probably realistic: the European Union can’t let Britain slip away without leaving a scar first, lest they empower nationalists in other countries. That means May needs to start laying the groundwork for trade agreements with other nations, especially Anglophone ones, to compensate for whatever post-Brexit trade impediments the EU throws up. New Zealand and Australia have both expressed interest, but the United States, the world’s largest economy and the UK’s top national trading partner, is the crown jewel. A strong bilateral relationship with America, free of any lingering post-Blair hangovers, is a necessity for Britain.

I rather doubt the polished May is particularly keen on Trump’s brand of politicking and I’d bet money that she winced when he referred to her recently as “my Maggie.” And yet, in a perverse way, Trump is valuable to May. The European Union has indicated it intends to take a very hard line indeed toward the UK during the Brexit talks. Brussels has appointed to its negotiating team ruthless operators like Martin Selmayr and hardline federalists like Guy Verhofstadt. In Trump, May will have an invisible bully in her corner, one who snarls with contempt for the EU, one who clinched the most powerful job on earth by waving the same banner of populism that now threatens European elites. There is approximately zero chance that Trump will let the boys in Brussels sway him out of prepping a trade deal with Britain, an assurance that May needs.

The devil will be in the details of that trade deal. The United States and United Kingdom share a language, true, but there are still plenty of divergences in the two nations’ policies, over the environment (Britain is more committed to renewable energy than America), health care (open market access for the United States could draw cries of NHS privatization from May’s Labour opponents), agriculture (the use of growth hormones in meat is illegal in Britain), and financial services (the UK will want its powerful City of London advantaged). There’s also the matter of timing. Britain is forbidden from formally negotiating trade deals until it’s free from the EU, which lessens the pressure May and Trump can apply on Brussels.

But something else is becoming clear: the Brexit negotiations aren’t between a slingshot-deprived David and a club-thumping Goliath, as many EU elites would like to portray it. In order for the European Union to effectively punish Britain—which is the objective, make no mistake—it has to turn the UK into an isolated hostage, walling it off from the rest of the planet and slamming it with tariffs.

In our globalized and open world, that simply isn’t possible. With the United States still a heavyweight, China rising in the east, and Europe’s own economies expanding at a glacial pace, Britain has plenty of attractive alternatives to pursue. London can also retaliate against any punitive actions taken by the EU. May, in her Brexit speech, warned that “no deal for Britain is better than a bad deal” and hinted that her Conservative government could drastically lower UK taxes to poach business from the continent. For France, where GDP growth is anemic, and Germany, already timorous over Brexit denting its exports, that’s a resonant threat indeed.

Trump might be a difficult partner, but it could be that he helps May make a success out of Brexit yet.

Image: Theresa May speaking on the objectives of Brexit on January 17. Flickr/Crown copyright/Number 10