Will Trump Revert to Gunboat Diplomacy in Latin America? 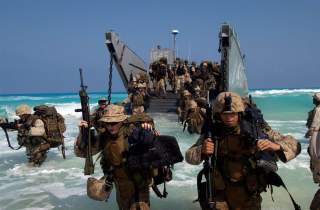 News media outlets are abuzz with reports that President Trump told aides in August 2017 to prepare a contingency plan for U.S. military intervention in Venezuela. The president apparently indicated considerable interest in that option. His security advisers reportedly pushed back firmly, arguing that resorting to military force would have significant adverse repercussions. For example, they warned it could cause a surge of anti-U.S. sentiment throughout the Western Hemisphere. Although their opposition caused the president to put his flirtation with that drastic measure on hold, there is no evidence that he has renounced it. Indeed, given the worrisome political, economic, and security developments in Venezuela, Central America, and Mexico, there is a significant chance that President Trump or a future occupant of the White House will give that option serious consideration.

There may be a tendency to forget that U.S. military coercion of troublesome regimes in the Western hemisphere was once a major item in Washington’s foreign policy toolbox. That approach, so-called gunboat diplomacy, led to numerous military interventions during the first three decades of the twentieth century. That was especially true in Central America and the Caribbean. Washington launched multiple invasions and occupations of countries such as Haiti, the Dominican Republic, and Nicaragua. Even Mexico, a much larger and stronger country, was not immune to Washington’s imperialism. During Woodrow Wilson’s administration, U.S. forces seized the port city of Veracruz and sent an expeditionary force deep into northern Mexico in an attempt to apprehend Pancho Villa and his armed rebels.

Such crude conduct supposedly came to an end with Franklin Roosevelt’s proclamation of the Good Neighbor policy. But Washington’s respect for the sovereignty of its hemispheric neighbors was erratic and incomplete even following that policy change. Indeed, much of the change seemed to be in tactics rather than fundamental principles or goals. For instance, after World War II, U.S. administrations relied more on covert operations by the new Central Intelligence Agency instead of military force to undermine governments that opposed Washington’s agenda or behaved in an unruly, independent manner.

Thus, the CIA orchestrated the overthrow of Guatemala’s left-wing president Jacobo Arbenz, and was at least somewhat involved in undermining the rule of Haitian dictator “Papa Doc” Duvalier. In addition, the CIA overthrew the Dominican Republic’s Rafael Trujillo (who had apparently outlived his usefulness as a U.S. client), and Chile’s socialist president, Salvador Allende. The Agency also made multiple attempts to assassinate Cuba’s Fidel Castro and organized the unsuccessful Bay of Pigs invasion to oust him from power. Furthermore, during the 1980s, the CIA channeled financial and military aid to rebel forces in Nicaragua as part of a campaign to overthrow that country’s extreme, left-wing Sandinista government.

The military option did not disappear, however. In 1965, Lyndon B. Johnson’s administration presided over an invasion and occupation of the Dominican Republic to prevent the elected left-wing president, Juan Bosch, from taking office. George H. W. Bush also used U.S. troops to oust Panama’s Manuel Noriega, a corrupt, one-time CIA client who apparently then tried to take money from both Washington and Havana. Finally, in 1994 the Clinton administration sent a force of naval warships and Marines to remove Haiti’s military government from power. An invasion was averted only at the last minute when the junta capitulated to Washington’s demands.

The latter incidents indicate that the use of gunboat diplomacy is not just a quaint tactic confined to the early twentieth century. U.S. leaders have always been nervous about hostile or disorderly regimes emerging in South America, and they usually take decisive action, regardless of what wishes that other countries in the region might have. Today, President Trump appears to be responding to both unpleasant developments.

Venezuela is the most visible problem. Under the disastrous Marxist economics that President Hugo Chavez and his successor, Nicolas Maduro, have pursued for nearly two decades, Venezuela has become a catastrophe of economic and political chaos. Once the wealthiest country in South America, Venezuela's gross domestic product is plunging at double-digit rates, and inflation is now soaring at a mind-boggling 46,000 percent. Maduro's increasingly beleaguered regime has responded with ever more severe authoritarian measures, virtually eradicating the country's free press and imprisoning scores of opposition leaders.

Farther north, multiple Central American nations have become war zones involving numerous drug cartels and other criminal gangs. Murder rates in El Salvador and Honduras are the highest in the world, and Nicaragua, Belize, and Guatemala are not far behind. If that were not enough to agitate U.S. policymakers, the Sandinistas have returned to power in Nicaragua and are engaging in authoritarian practices even exceeding those of their first stint in the 1980s. Those various developments are a critical factor in the flow of desperate refugees trying to find sanctuary in the United States and the opportunity for new, far safer, lives.

Perhaps most troubling of all, the security and political environment in Mexico looks increasingly unstable. The level of drug-war-related homicides has reached record levels, with political figures becoming increasingly high-priority targets by the drug cartels for assassination. And now, Mexican voters have elected left-wing populist Andres Manuel Lopez Obrador as the country’s new president. Opponents in Mexico, and conservative critics in the United States, worry that he may be Mexico’s version of Chavez or other nasty populist autocrats like Vladimir Putin or Recep Tayyip Erdoğan. Additionally, his statements over the years certainly indicate that he is no friend of the United States.

There is little danger that Washington will resort to gunboat diplomacy in the near term. U.S. officials are not fools, and they recognize the massive downside of implementing that strategy. The diplomatic fallout alone would be daunting, and the dangers to a U.S. occupation force might well rival those encountered in Iraq and Afghanistan.

Nevertheless, the gunboat scenario cannot be ruled out in the long term, if the violence and economic chaos in Venezuela and Central America escalates. And if a similar deteriorating situation emerges next door in Mexico, that option will receive very serious consideration. It is hard to imagine President Trump standing by and watching Lopez Obrador implement anti-U.S. policies or preside over an economic meltdown and a burgeoning police state along the lines of Maduro’s behavior.

Cooler heads might also point out that better options than gunboat diplomacy exist. Ending the disastrous war on drugs would likely do more than any other measure to undermine the profits and power of the drug cartels. That step, along with adopting a more liberal and orderly immigration policy, would alleviate the chaotic flow of desperate refugees into the United States. Also, as the mounting opposition to Maduro’s ham-handed rule in Venezuela shows, incompetent political leaders usually pay eventually for their misdeeds at the hands of their own people. But responding to the problems of America’s southern neighbors requires patience and creativity—two qualities U.S. officials are not renowned for. Hence, there is a troubling prospect that they will instead embrace the simplistic option of a new round of gunboat diplomacy. That would be unfortunate for both Latin America and the United States.

Ted Galen Carpenter, a senior fellow in defense and foreign policy studies at the Cato Institute and a contributing editor at the National Interest, is the author of 10 books and more than 700 articles on international affairs. His books include Bad Neighbor Policy: Washington’s Futile War on Drugs in Latin America (Palgrave Macmillan, 2003) and The Fire Next Door: Mexico’s Drug Violence and the Danger to America (Cato Institute, 2012).